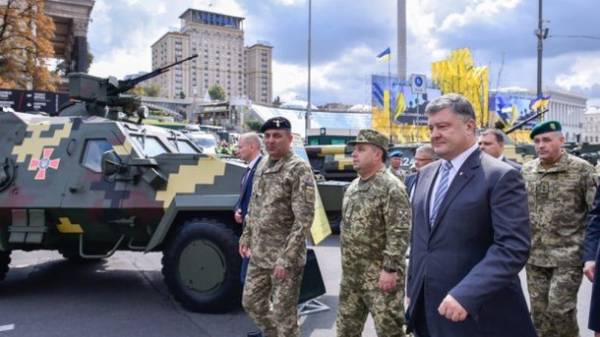 A year the 26th of Ukrainian independence happened one of the most important changes in its history – the abolition of visas with the European Union and the Association Agreement. This was stated by President Petro Poroshenko, opening the military parade in Kiev, the press service of the head of state.

“Today seems to be not round date, but 26 years of independence, was special. He was generous with several positive developments. They will leave their mark in our history and will affect our future. On 26-m to year of independence, we successfully concluded the fight for the ratification of the Association agreement with the European Union. To block this process, Moscow has made more efforts”, – said Poroshenko.

He also said abolishing the visa regime with the EU.

“On the 26th year we came out of the deep shock and pain, trials that led to the Ukrainian economy Russian aggression. We resumed GDP growth, and future forecasts are positive,” the President added.

We will remind, today in Kiev held a military parade in honor of Independence Day, which in addition to Ukrainian servicemen attended by the soldiers of NATO countries.