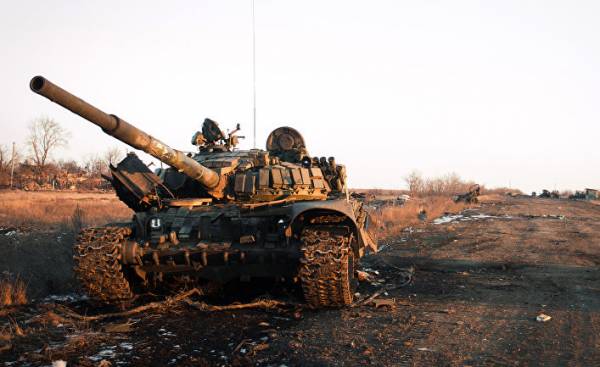 It would certainly be wrong to compare the creeping war in the East of Ukraine with the slaughter in the trenches of the First world war, so mercilessly described in the classic novel by Erich Maria Remarque “On the Western front without changes”. But in some ways they are still similar.

For three years in the middle of Europe there is a war, and both sides of the front soldiers in the trenches watch each other, ready to grab a weapon if necessary.

The official number of dead in this war is now about ten thousand. But this figure is probably too low, as losses in the ranks of Russian and separatists are covered very defective, if not covered. And officially now in General there is a truce.

When I visit some of the most advanced positions of the Ukrainian forces down in their trenches, there is peace. Soldiers wandering around, the corner of my eye watching what is happening, but not too closely.

The same thing probably happens in 200 metres East of where the trenches of the Russians supported the separatists. Walking in body armor and a helmet on your head, you feel ridiculous, but the journalist in the trenches must do what is commanded. Although the soldiers no helmets no.

“I hear only the birds singing, I say to the commander position, is there really a war going on?”

“Yeah,” he answered, ” but the separatists are attacking at night. If you are here again came in the night, you would know how it feels”.

But I’m leaving before dark, go to a small city that is closest to the trenches, where I have been. At first it seems that life there goes on as usual — same as before Russia started the war.

But it soon becomes clear that this is not so. The few shops of the city seem to live exclusively due to the fact that buy soldiers: I think for the most part coffee and cigarettes.

On the streets the military is approximately the same as a civilian from time to time on the main street rumbles military transport.

Everyone I talk to, are terribly tired of the war that seems will never end. They are tired of the fact that every time leaving the city, we have to stop at the road cordons and to explain where to go, from anxiety that the separatists or Russian troops will once again go on the offensive.

The place where I’ve been, attacked

But the officer that I was at the front, says that locals are not welcome and the presence of Ukrainian soldiers.

In the first place because the “volunteer battalions”, which recaptured the city from separatists, initially lacked discipline, and they made different kind of abuse.

The next morning after I left the front, I called the press attache of the army and told that the position I had visited the day before, almost completely destroyed by the fierce attacks of the separatists. However, no soldier was killed. To write about. On the Eastern front.