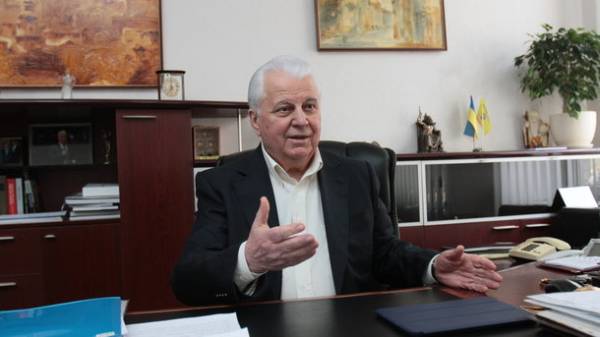 Especially for the 26th anniversary of independence of Ukraine website of “Today” asked the first President nnetwork of Ukraine Leonid Kravchuk, what he sees Ukraine in five years. About the reforms, EU integration and NATO, and the return of Donbass and Crimea published the answers of Leonid Kravchuk in the first person.

Last year I met with the peers of independence. Were people, somewhere 250-300 people, all under 25 years old. I looked into the eyes of these young people, this is another generation. They speak languages, they know Europe, they know life … I am the President of Ukraine for the first time took in hand the mobile phone in 1991. And now the baby in the manger takes the phone. Everything changes, we go forward, we are doing something. But I can’t do it because everyone pulls your plow and thresh his sheaves without looking like the other hammer. Therefore, I want you to say the following: facing the threat of losing many people, and we have them every day lost, in danger of losing perhaps and territories and the independence of these territories, all the rest we have to move aside and be together under these slogans, to save Ukraine, to build a democratic state all together, the whole world. And should speak more loudly and boldly to Europe and the world.

The European Union and NATO

– Frankly, I have on NATO was not always the same opinion. There was a time when I thought that we have to choose: either to improve relations with our East and North, or NATO. And for a while I was leaning to the North. But after one conversation with Boris Yeltsin, when he told me that Russia would never agree to Ukraine went to Europe, and showed the decree that approved the main directions of foreign policy of Russia and Ukraine there is considered an integral part of Russia’s influence on Ukraine… Region of influence, you know? I realized that with Russia, we porridge are cooked. So I’ve played and now stand firmly behind the fact that Ukraine became a member of NATO.

I changed my point of view, and now millions of people changing it. According to a recent survey, 47% of people support Ukraine’s accession to NATO. There was a time when it was 18% and even less. My point is that the regularity of political life, aggressive, ill-considered, bellicose policy of Russia is forcing us to defend ourselves. To protect its independence, its sovereignty, to build the European life, because geographically we are in Europe, and adhere to European values. Therefore, for Ukraine, NATO is not just an option, it is the real way. To avoid different kinks, and political buffoonery, I call now to hold a referendum on whether to have Ukraine in NATO or not to be. Because someone is looking at Ukraine as a marriageable girl. And when she’s already on the referendum will be determined relative to NATO, to be or not to be Russia and everyone else realize that the girl was married. And do not be afraid that someone will become more aggressive. He and so every day becomes so.

As for the European Union, we have a long way to go. And reform, and other issues, but the rate of our European Union. The bezviz that we have received indicates that step by step we can hope for the European Union. But it is not necessary to them to cachicata-magnetica. And then they say, Ruban forest, and we are already beginning hewing. We have to say: “We are the forest hewing we will not, as it threatens the Carpathians. But if you are asking this question depending on to be in Europe or not to be, to go to Europe with naked Carpathian garam – we don’t want such a Europe.” It must be able to speak, you have to have a say, not just to you praise, you’re so smart and flexible. There are things on which we should stand, and not be humiliated and not to substitute the right cheek when they beat us on the left. We have to show character, and Russia, too.

– There are three questions to power. The first – ending the war in the East and the return of Ukraine – over time, not immediately it will be – selected by force we have taken aggressive or territories. The second was the question of poverty. We now have 60% of people, according to statistics and international organizations, live below the poverty line. It is a platform for any explosions, political and even aggressive-military, revolutionary. The third is to organize power in such form and in such a way to go in reform, and stopped the large-scale corruption. This three question of power. If she starts, I stress this, we are not children that we will be able to do so quickly, but people feel that it not sitting offshore with their millions, but with people. I don’t live separately, separate fly, separately build, and with people. I am convinced that there would be another way of looking at power in Ukraine, and we will begin to move forward. And in five years will make very important steps. But to say that will solve all the issues? Such profound questions, which we climbed and bogged down, and out of stupidity, ignorance, and misunderstanding or lack of understanding of the child in short pants came to power – have to say generations. We have lived with you for generations. They say that a generation is 25 years. The next generation has to solve other issues and other major problems.

The return of the Crimea and Donbas

– I don’t think that Russia will agree to return to us and the Donbass, and the Crimea. Russian policy, in principle, this policy of aggression. Russia is fighting 150 years. Now, if you look at hot spots in Europe, Syria and others – there are Russian troops. That is why both Russia and the Russian political elite and intellectuals brought up in the conditions of aggressive pressure on neighbors. When they talk about Ukraine, they can not afford to assume that Ukraine may be next. She must lie beneath them, and they to her. Here then is a good. As soon as she resists and gets out from under someone who doesn’t want to go under a guy, she ain’t. Here is a Russian. Therefore, for a Russian citizen is very important that they saw that their leader was conducting a policy: “would native country, and there are no other worries. Tramp Baikal goes, the song starts and home something sings”. Even “tramp” on “homeland”. There is no person, there is a “homeland”. And when their leader thinks so and so does, then he’s good.

They are now, however, he was somewhat overrated, but Putin is hoping for your win in the presidential election and their political dividends. And it was through pressure, aggression, occupation of foreign lands and people. So I do not think that before the presidential elections in Russia, something will change. Well, if Putin wins, and I think that today there are chances if you take the statistics, he will pursue the same policy. Is that pressure on Russia will expand not only economic but also political, financial, and other lines. And Russia will see that it can not cope with those territories that it seized, including Crimea and Donbass. Then we will return very quickly, or it will return. So I predict. How will it be? Hard to say, but I would like the way we want. And we want peace, harmony, understanding, do not want to fight with Russia, but don’t want to stand in front of her knees.