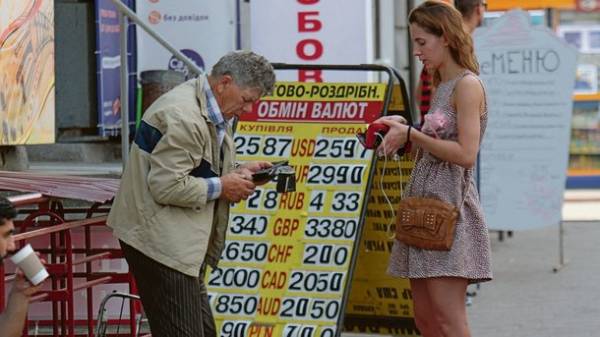 Ukrainians will soon be able to carry out currency transactions by international rules, that is, without the permission of the controller for certain operations. It will happen if Parliament adopts the proposed national Bank bill “On currency” that removes almost all restrictions for over 20 years. The NBU is hoping that the deputies will consider at the nearest session, and it will start to operate in 2018, six months later, provided for a transitional period.

Experts say that it is a positive step, but note: in addition to the law, you need to take a number of bylaws. In addition, the law provides for the NBU the right at any time to return constraints on the operations of legal entities and physical persons with currency.

PROPOSED. The main provisions of the future law are: the national Bank allows the bankers to individuals and any action by the currency is not prohibited by law. Now the opposite: everything is forbidden that did not have the authorization of the regulator. About carrying out any operations with currency will have to just let the NBU. Now: first you need the permission of the national Bank, for example, importers is to purchase foreign currency for importation of goods from abroad.

You will also be able to invest foreign currency abroad, for example, buy securities of foreign business entities without a license. Today, this rule is already in force thanks to the decision of the national Bank, but the permission of the controller while the need.

Non-residents (foreigners) and residents (citizens of Ukraine) will receive equal rights when conducting any foreign exchange transactions. The regulator has reserved the right to enter and to renew any restrictions on currency transactions, but after consultation with the Council of instability.

We will remind, Council of instability created by presidential decree in March 2015. it includes the leadership of the NBU, Ministry of Finance, the national Commission on securities Natsfinuslug, insurance Fund repayment of deposits of physical persons. Decisions of the Board are Advisory to the national Bank.

THAT WILL CHANGE. As soon as the law comes into force, banks will be entitled to any foreign exchange operations. You may resume lending in foreign currency. There will be only two types of licenses — regular banking license for banking activities and foreign exchange licence for non-banking financial institutions (e.g., exchange of currency not owned by banks). Now still need a license for investment abroad.

Is also automatically cancelled the article of the law “On foreign economic activity”, providing for fines for foreign exchange transactions without a license. And license is now required for each transaction. This will allow not only banks, but also individuals to invest abroad in shares of foreign businesses.

WHAT WILL BE LEFT. Will continue the ban on payments in foreign currency as per the draft law expressly States: “the Hryvnia is the only legal tender on the territory of Ukraine”. Will the limit on cash payments in excess of 50 thousand UAH. That is to pay for a large purchase (flat, car, plot of land) exchange cache will not work — only UAH through the Bank. But e-Commerce should be more transparent since importers do not need to be a black market, where they were forced to go for currency because of the prohibitions of the national Bank.

Finality not predict that the new law will affect the hryvnia exchange rate, as the document, the NBU will only combine two of the decree of the Cabinet of Ministers 20 years ago in one law, giving the national Bank the right to respond promptly to the changing situation in the foreign exchange market.

Experts: the law will hit black market in the shadows remain a crime

The experts cautiously evaluate the proposals of the NBU. Senior analyst finkompany “Alpari” Vadim Iosub says that they correspond to the wishes of the financiers, but don’t expect “instant freedom”: “the law will strike a blow at the black market. If the currency is difficult to buy, then all who have it will sell no more than what is needed in the framework of the compulsory sale. And Vice versa. In the shadows remain, only operations associated with crime, money laundering, tax evasion”.

But Alexander Okhrimenko fears that the regulations of the national Bank will not allow the law to work properly: “the Law prescribed a framework. No license — there will be resolution, not the fact that they will be easy to obtain. In addition, the national Bank reserved the right at any time, and without consultation with the Cabinet, to impose any restriction on the currency market. This contributes to improvement of the investment climate”.