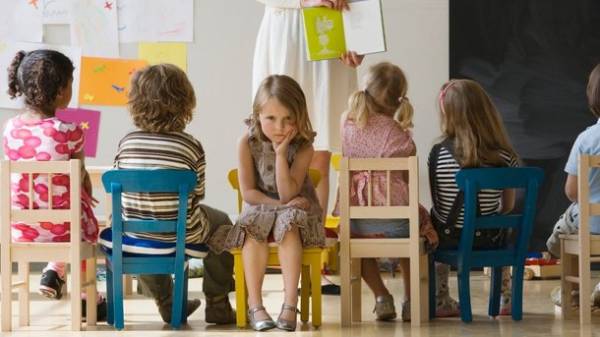 Two more weeks and will start kindergarten time. As all life in society, it is not without a showdown. And since children are not always able to analyze the feelings and of the ability immediately to realize the desire, this process will be very emotional and may even result in the waving fists.

Together with the expert Tatiana Mikheenko, a psychologist of the highest category and a psychotherapist, we have considered a typical problem situation, factoring in participation in their resolution of the teachers garden. Of course, a number of issues require their involvement. But in most cases, problems need to be solved with your own child, as they occur mainly due to the behavioral reactions of children whom they directly or indirectly taught to parents. So, to work on the problem in the garden, you need primarily within the family.

HAD A FIGHT WITH A FRIEND — DON’T INTERFERE

If the child fights occur every two to three months- this is one of the forms of interaction between children, and to do nothing. If more often — it is necessary to clarify details of incidents from the child and the caregiver. If the fighters are the same age, do not rush to intervene: the children learn to assert personal boundaries, a skill they will need in adult life. Besides, as a rule, these fights eventually come to naught. If someone else’s kid throws chairs and pressed to the wall of your child, threatening a fork to gouge out eyes — your intervention is necessary, as in the case that the bully is older than your child or two of the attackers. While your child will compel that such unequal attack, he should definitely tell the teacher.

Is strictly prohibited in all cases to solve the problem with the abuser, only with his parents.

If the instigator of the fights — your child, tell him the actions of a fictional boy how to interact with children in a given situation without fists.

FIGHTING FOR LEADERSHIP — EVERY NIGHT WE PLAY BOARD GAMES

Children who want to be, but don’t get a place in the team or they lose it, they can refuse to go to the garden, to fight, to hurt a competitor, not to listen to educators. Such reactions cause anger because of the inability to be a winner.

Output — every night play any table games, and in any case do not give. This will train his ability to accept defeat. At the same time, losing yourself, you say: Oh, I can’t! Well, nothing, in the next round win for me. This will reinforce the child’s understanding that life is a series of victories and failures, and teach him to calmly react to such a situation.

While praise for such a gesture not only if the child happily reported it, but when the whimpers, wanting to return the toy back. Something like: “I’m proud of you! Now your friend is happy and rejoices, that’s what friends do”. Also explain that gifts are not taken. In any case, you cannot say “do Not worry, buy a new one”. It teaches generosity and extravagance. If donations are made with enviable regularity — alerted: this bribery with the aim to place another child (Ren), and this often happens when low self-esteem of the child. Work on its improvement and often praise the child.

If a child is upset due to the fact that he has today brought to the garden, brand of the robot, and Masha — fashion doll from ads every time focus his attention: “But you have a car at the office, and Vasya and Masha — no.”

Asking to buy “a toy.”. Say: “I have heard, and it will be an opportunity to buy”. If the child is not delirious this toy, reminding you of her day to day — forget about her and you. If requests, requests — try to buy an alternative to it, equal in essence, but more gentle to your budget. And if the child will be given: “It’s not like Bob”, again succenturiate it with “but”.

HE HAS TAKEN THE TOYS — TEACH TO DENOUNCE

Explain to your child that in this case, you need to loudly say: “This toy is mine, and I did not give it”. Typically, public denunciation of acts on are selected as the stop-cock, and your child costs from bednesti.

If collecting your child, for example, the history of fairy tale characters from time to time disassemble the actions and feelings consuming his victims. For example, there was a hedgehog with a basket of apples. And on the bridge he was stopped by another hedgehog and took the basket. Your questions to the child: “What was the first pochuvstvoval hedgehog?”, “Why this?””, “I would like a second hedgehog, so deal with him first? Why?” “And how must do the second hedgehog, if I wanted apples or basket, belonging to the first a hedgehog?”. Such analysis will be recorded in the mind of the child an adequate response to the desire to play someone else’s toy.

If in a garden the child whines that he wants home — perhaps this is due to the inability to exist in the team and outside the home. Do not rush to abandon the garden: learn interaction with peers and not be afraid of tears of the child — now he is upset, but when the problems of coexistence with people will become bigger, he will have the skills and experience to solve them. To social skills on the Playground: no children play with peers, but behind there is always a parent who will protect, or suggest ways of resolving the conflict, without allowing the child even really realize the situation.

SHOWS THE ASS — FOCUS ON HAND

Shows you (and only you) the ass or genitals — like, hoo, I have! Say, “you have arms, legs, and head.” Not seeing much of interest from parents, the child himself will lose to these parts of the body interest.

Do not worry that the child will continue to “demonstration” in the kindergarten where she got it. Increased interest in the genitals — part of sexual development of children, and he will not become unhealthy, if it is not “feed” their attention. But if the child shows ass in response to the request to clean up the scattered toys, explain the inadmissibility of such a reaction to the request in principle and do not focus on the offensiveness of this particular method of protest.