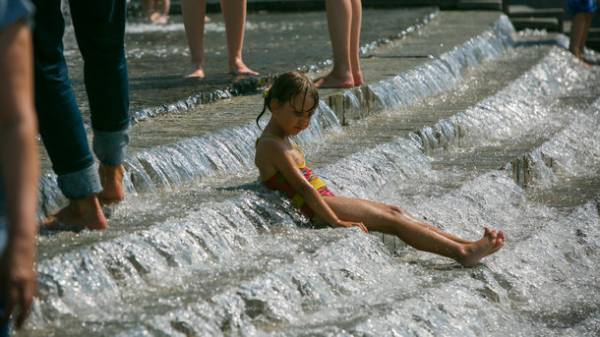 Ukrainians waiting for a hot and overcast weather over the weekend. The temperature in the South will reach 36 degrees above zero. At the same time next week are expected to be significantly cold, and thunderstorms. The air temperature drops to 23-25 degrees. The website “Today” found out what the weather is waiting for the Ukrainians in the coming week.

Saturday, August 19 in Ukraine is expected to warm and cloudy weather. So, according to the forecast Ukrgidromettsentra in the South, the thermometer will rise to 33-36 degrees. At the same time in Central, Eastern, Northern and Western regions – from 31 to 33 degrees. No precipitation. 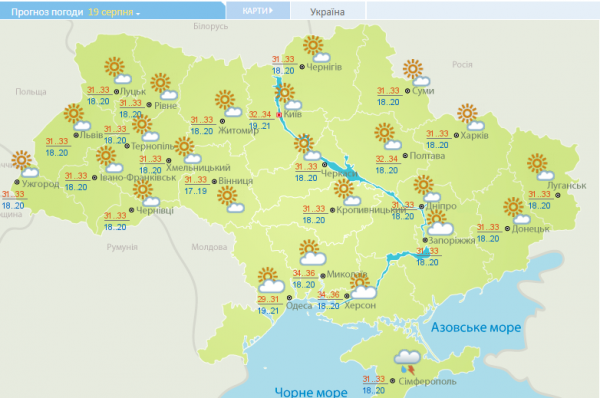 August 20, the storm cyclone will cover the territory West of the country. This is expected a slight cold up to 27-29 degrees above zero during the day. The rest of the territory is hot and overcast weather. So, in the South from 34 to 36 degrees in the center and the East – from 31 to 33 degrees, and in the North of Ukraine – to 34 degrees above zero during the day. 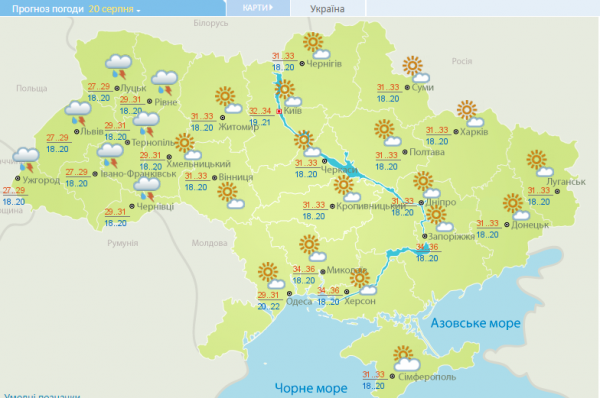 Monday is expected to be much cold in the West of Ukraine. Here the thermometer column will fluctuate in the range of 20-24 degrees in the afternoon. At the same time will be thunderstorms. At the same time in the South and East are expected from 31 to 33 degrees during the day, in the center and North – 29-31 degrees above zero. 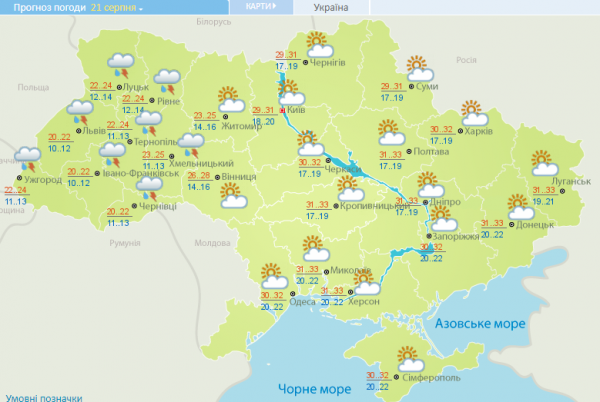 On Tuesday, August 22, the storm cyclone will move West to center, North, South and East of Ukraine. Throughout the country is expected cold snap. So, in the capital and in the North the temperature will oscillate in the range of 23-25 degrees Celsius. On the South and East to 27 degrees, and in the West to 24 degrees above zero during the day.

August 19 marks the feast of the Transfiguration of our Lord God and Savior Jesus Christ, according to the portal “Weatherman”. In the old days noticed that with the Savior “weather is changing”. The weather forecast for this day indicated for the upcoming autumn: “What is the day in the Second Saved, so is the Cover (14.10)”. If the day was dry, and the autumn will be dry, wet, wet autumn, and if clear, should prepare for a harsh winter.

20 of August is revered the memory of St. Marina of the warrior; monk Pimen caves. The people there was a saying regarding this day: “Pimeny-Marina – don’t look in the forest raspberries.” From this day cease summer storm begins falling leaves of birch. In the old days notice, if on this day the storks ready to fly away, the autumn will be cold.

21 Aug revered the memory of Sainted Myron, Bishop of Crete. The people called the Holy Myron Carminative and said, “Myrony-Carminative dust on the road being driven, the red summer moan” because in this day there are strong winds. In the old days, remarked, “what Miron is the January.”

August 22, the day of memory of Apostle Matthias. In the old days said that Matthew let bad weather. On August 22, autumn rain, summer interrupts. In this time has kept pace with cranberries, plums, autumn mushrooms appear.

23 Aug revered the memory of archdeacon Lawrence. Lawrence called odocoileinae: “If the water this day at noon, a quiet, not to worry – the fall will be quiet and winter without blizzards evil”. If strong heat or heavy rains, so it would be a long rest of the fall.