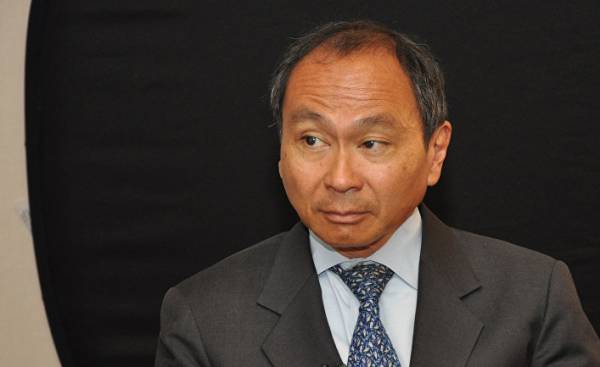 In the summer of 1989 Francis Fukuyama (Francis Fukuyama), American scientist and the Deputy Director of planning services Department of State, published an article “the End of history?” in the journal The National Interest. In it, he proclaimed “the universal spread of Western liberal democracy as the final form of any human government.”

According to Professor of political science at Stanford University, the ideological conflict between East and West ended with the triumph of liberal democracy. This victory had not yet received the specific display (the fall of the Berlin wall in November of the same year fixed that gap), but the decline of the Soviet Empire, took such proportions that, not to imagine its disintegration was simply impossible.

In addition to the end of the cold war ought to celebrate the triumph of liberal democracy as a system of control over all competing ideologies. Today it was communism, yesterday — hereditary monarchy and fascism.

On the basis of this conclusion, Fukuyama advanced the idea that liberal democracy constitutes the “end point of the ideological revolution of mankind” and “the final form of any human government.” In other words, came “the end of history.”

The return of communism

The twentieth century came to an end, and the idea of end of history has generated heated debate. It is worth noting that the title of the article Fukuyama ended with a question mark. “I have a hypothesis, he reminds. — The idea of end of history has never been absolute sense.” However, following the publication of the reactions were too numerous and distant for emotional reflection.

In the fall of the political scientist Samuel Huntington (Fukuyama was his student at Harvard, when I was preparing a thesis in political science) published in The National Interest response, in which he noted the possibility of a return to the ideology like communism, the probability of a split between supporters of democracy and the inevitability of the emergence of new ideologies. This theory he developed a few years later in the “Clash of civilizations” (1996).

The controversy between the girl fighting and his critics became even more acute after the expansion of the original article in the book “the End of history and the last man” in 1992. Was waiting for her dizzying success: she found herself at the head of the famous best seller list The New York Times. Nevertheless, all is not canceled doubts about using the concept of “history”.

Opponents Fukuyama cited the example of recent developments: the bloodshed in Tiananmen square and the Iraqi invasion of Kuwait in 1990 was an indication that the story isn’t ready to stop his move. In addition, Fukuyama against their will found themselves in the role of the preacher happy of globalization with the idea that at the end of the twentieth century, all people dream only of freedom, prosperity and democracy. In fact, he first talked about the fact that the imperialistic tendencies of the great powers began to decline, and that the third world war has become less likely

His approach to the end of the story was equally philosophical and geopolitical: he is repelled by the thought of Hegel, or rather, her reading of the philosopher Alexander Leather (“Introduction to the reading of Hegel”) on the end of the story. For Hegel, the history of the world, despite all further changes ended in 1806 with the battle of Jena, when Napoleon routed the Prussian army.

Fukuyama took as a starting point the collapse of the Communist system. “By the way, surprising that Marxists were the first to understand the essence of the book as they had the same idea of Hegelian end of history, he said. But he had to come with communism. They made a mistake. My argument was that the latest stage of our history is bourgeois democracy”.

Underlying this conclusion is the idea specifies that emerged from the French revolution the principles of freedom and equality represent the end point of ideological development, beyond which of itself is impossible to imagine.

“Let liberal values are still far from winning the fight for territory, they clearly won the battle for the minds — I am sure Fukuyama. Look at what happened in that period: in Russia, Europe, China, Southeast Asia and Latin America, the peoples turned towards the Western model.”

The most controversial conclusion of the book is: the author talks about “boredom” that could give rise to a period without major political conflicts. The symbol of this boredom, in his opinion, the officials of the European Union or of the state Department, who represent the guardians of the peace of democracy.

It should be noted that the term “boredom” has led many into confusion. Whatever it was, because the progress of science, economic freedom and new technologies that bring countries closer together and make them interdependent, Fukuyama noted the acceleration of history.

The society of the period of the end of history bears the imprint of constant historical change. “If you carefully read my book, you will see that I warned about the danger of this boredom and the threat of war against democracy, which can start those who grew up in it. I noted and the threat of relativism, in which democracy is perceived as absolutely normal management model”.

This idea was developed in his two following books: “the Great divide” and “the Origins of political order”.

“Of course, there are things that I never imagined when I wrote “the End of history” 25 years ago, says Fukuyama. The first is political decline. I saw history as moving forward with the construction of institutions and an increasingly Mature democracy. I didn’t think things can go back”. Only that is the democratic practice in the United States regressed, especially with the election of Donald trump:

“In a period of peace and prosperity of the elite tend to row up under the power in their own interests, which happened in the US with the emergence of so strong economic lobby that is possible for them to obstruct reform and block the system. Reforms cannot be implemented, and this is one of the reasons for choosing the trump. There is the idea that the establishment cares about its own interests and not the interests of the people”.

In addition, he admits that he didn’t understand how hard it is to come to a modern state. Most democracies suffer from corruption, mediocre leadership, the inability to create the necessary infrastructure and offer decent services. Fukuyama is referring to Italy, Greece or India, where 30% of MPs are involved in cases of extortion, murder or rape.

“In Bosnia the country is divided into three ethnic groups: Croats, Bosnians and Serbs are working only for their own. The main difficulty is to create worthwhile in the service of the citizens, the government, like in Denmark,” he notes.

The events of 11 September are often presented argument against the theories of Fukuyama, proof that the end of history illusion, and that the truth behind the “Clash of civilizations” of Samuel Huntington (he believes that the post-Soviet world on the contrary is moving toward greater conflict).

Anyway, Fukuyama was convinced that he was right and after September 11. Modernity, in his opinion, “will not be derailed by recent events, even if they are painful and unique in its own way”.

Today, 16 years after the tragedy, everything is different:

“I didn’t consider the strengthening of Islam. However, it does not seem to me a threat of the same order, which yesterday was communism. In all developed countries, after the war was well-organized Communist party. The Jihad has no such influence. In this case we are talking about the misfits. In American universities there is no jihadist movement. The radical attitude of these people is so strong that they would be unable to govern. Look what’s happening in front of us. Islamic state disappears. Even in the Iranian government to speak on the effective management”.

As Fukuyama himself believes, the main counterargument against the end of the story is China, which cannot dissolve in modern liberal society. The strengthening of its economic power keeps the risk of open conflict with the West.

“The Chinese system is a mixture of authoritarianism and a market economy, and I think in the long term the main enemy of liberal democracies. However, to copy the Chinese system outside of China — a difficult task”.

In his opinion, the long-term economic liberalism is inseparable from the political, not counting the aspirations of an increasingly prosperous middle class to greater freedoms (for example West). In other words, Francis Fukuyama still believes that the future of liberal democracy.