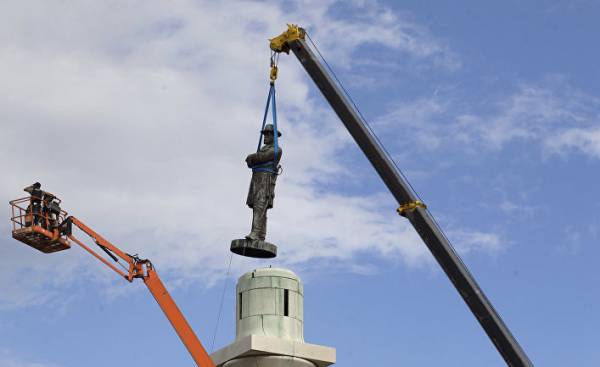 Recent events in Charlottesville showed that the civil war ended over 150 years ago, in fact, did not stop, she just took other forms. White immigrants from Europe, who founded the country, did not come to terms with the decline of its role in American society and the dominance of alien “minorities” — ethnic, sexual, and clan-bureaucratic. The financial crisis of 2007 and the pauperization of the white middle class gave a new impetus to the protest, which led to the election of Donald trump President of the United States.

In response to the “left” and a variety of minority groups rallied around the Democratic party, part of the Republicans and the media began a counteroffensive. The demolition of the monument to General Robert E. Lee in Charlottesville was outright provocation on the part of liberals. To protect the monument in Charlottesville gathered a lot of radical white movements (Alt-Right, White power, Aryan Nations, the Vanguard of America, etc.). However, most (and this was confirmed by Donald trump) was sympathetic, representatives of conservative white America.

The current campaign for the demolition of monuments to the heroes of the South began in April of this year in new Orleans, where at reinforced security measures were dismantled statues of the President of the southern Confederacy Jefferson Davis (stood for more than 100 years), “southern” generals Pierre de Beauregard and Robert E. Lee, as well as the monument to the fighters for the freedom of the South. These people still revere in the American South, their names are assigned to the schools, streets, institutions and even military barracks. However, New Orleans mayor explained his decision by the fact that these statues were a symbol of “white Suprematism”.

The decision to demolish was made in 2015 under the presidency of Barack Obama, and clearly reflected the mood of the black community of New Orleans. The pretext was the murder of a white nationalist of the nine black members in the Church of the city of Charleston (South Carolina) in June 2015. Because the attacker — Dylan storm Ruth — in one of the photos shot with a Confederate flag, with the direct support of Barack Obama’s campaign was launched across-the-Board elimination of the symbols and flags of the South. It should be recognized that Obama has largely contributed to the radicalization of the whites: he took the side of African Americans in conflicts with the police and never called blacks and Islamic perpetrators of the attacks terrorists.

After the events in Charlottesville in Durham (North Carolina) with the connivance of the authorities, the leftists organized an unauthorized demolition of the monument to the soldiers of the South, which had stood since 1924. Was also dismantled the monuments to the confederates in Baltimore, Maryland.
The struggle is irreconcilable and with other symbols of the rebellious South, including the Confederate flag. So, the Confederate flag a few years ago was removed from public institutions of South Carolina as a symbol of “white Suprematism” and racial hatred.

It is significant that the initiator was then Governor, and now Ambassador to the UN, Republican Nikki Haley. Barack Obama called this action “a sign of improvement” in social climate. Now the “Commission of historians” preparing the demolition of monuments in Richmond (Virginia), which for some time was the capital of the confederates. Planned and other large-scale actions across the country. A list of memorials and monuments to the Confederacy throughout the United States, comprising over a thousand “objects and symbols in public places”.

It is noted that in the U.S. there are 718 monuments and memorials to the Confederacy, including about 300 in the States of Georgia, Virginia and North Carolina. 109 schools have been named after General Robert E. Lee, Confederate President Jefferson Davis and other heroes of the South.

Sensitive to the moods of voters, mayors and governors actively support the “liquidationist” plans. Over the past two years they removed 60 such “characters”. Where will lead this process? The consequences are unpredictable. Donald trump said: “Today you demolish the monuments to the confederates, and tomorrow — the founding fathers of the USA — George Washington and Thomas Jefferson because they had many slaves.”

A number of European observers believed that much of the current events is reminiscent of Poland (demolition of monuments to Soviet soldiers), Ukraine (dismantling of monuments of times of communism) and the Soviet Union, which led the struggle against the reactionary characters of the past (like the demolition of monuments to kings and to General Skobelev). Probably this is the logic of those who want to “correct” the story in their short-term gain. In this case the attack is on the “white” heritage of America with his controversial, but a great story. While the slave South — only the initial stage of dismantling.

At the same time close their eyes to the crimes of northerners during the civil war. So, in Washington, DC, Central Park in new York and other places there are monuments to the Northern General, William Sherman, which from the point of view of today, was a war criminal and one of the first employed the practice of “scorched earth”, terrorized the civilian population of the South. On the other hand, the much-abhorred “South” General Lee was not only a talented commander, but also a great engineer, he did much to protect the East coast from hurricanes and managed to protect the Mississippi river from flooding. In 1862, immediately after assuming the office of commander-in-chief of the forces of the South, he gave his slaves freedom.

The fact that the struggle with the monuments and historical memory turned it now means that there is a deep reformation of American identity are revising our core values. Prevailing in America today is the ideology of neoliberalism involves the elimination of the historical memory of all that identificireba with “white chauvinism,” the traditional role of men in family and society. And everything that recalls the conservative resistance of the South cosmopolitan the North during the civil war, 1861-65 years, is of particular hostility.

To date, States from the country of white settlers with Puritan ideology that made it great, turn into a racial melting pot with a neo-liberal internationalist ideology. In this country the white pioneers, who won the mainland, there is no place, they turn into “Mohicans”, pushed to the margins of social and economic life. Recent data from the French historian Emmanuel Todd on the mortality and social degradation of white Americans are fully correlated with its forecast in 1976 about the inevitable collapse of the Soviet Union — on the basis of statistics on fertility, divorce, alcoholism and reduce the proportion of Slavs in the population of the USSR.

Because the white gradually become a minority in the “new Babylon”, they decided to give the “last and decisive battle” — without any chance of success. After a couple of decades it will be impossible for purely demographic reasons. In one of the comments on the pages of the Paris Le Monde expressed the following thought: the struggle waged by the trump for traditional ideals, lost in advance. Can’t really blame him that he is such as it is — “white macho”. But it can be criticized for the fact that he stubbornly does not see that he lives in a different country. Trump’s slogan “let’s make America great again” really means a return to the nation state of the white as it was before the liberal reforms of 60-ies of XX century, however, this is impossible in principle.