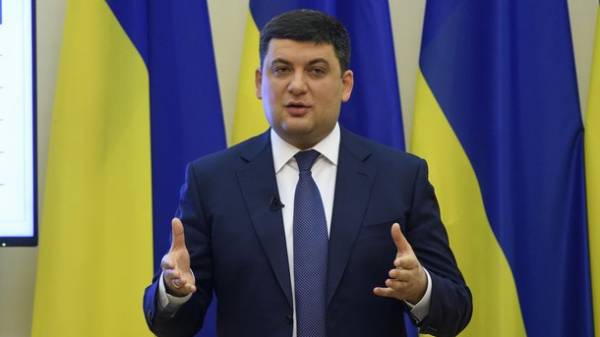 Ukraine does not have enough coal to meet the needs of the population and industry. This in an exclusive interview Dnieper “34 channel” said Prime Minister of Ukraine Vladimir Groisman.

The head of government reminded that the problems with coal, the Ukrainian energy companies have arisen due to the blockade of Donbass.

“You know my attitude to the blockade. I always talked about it very systematically and once again — what was done by some “patriots”, I mean the initiators, it was all done in the framework of interests of the Russian Federation, not Ukraine,” – said Groisman.

The Prime Minister stressed that due to the blockade of Ukraine and energy companies in particular, have to abandon anthracite coal.

“With regard to the transition to another coal. We’ve really developed a programme for the substitution of anthracite coal because we understand that access to Ukrainian mineral resources will always be shaky and we will have to push this issue, so many blocks of stations are switching to “G”. Today we do not have enough coal to produce energy and heat”, – declared the Prime Minister.

Also Volodymyr Groysman noted that at present, the TPP is all motivation for the conversion to coal of the “G”.

As reported, in connection with the so-called “nationalization”, and blockade of coal mines in ORDO, which produces anthracite, Ukraine has started to reduce the consumption of coal in favor of which is produced in the controlled area. That is, power plants that consume domestic coal G grade, work at maximum load, and anthracite TPP included as a residual – if there is a power shortage in the power system.

Previously, the company DTEK said that in order to increase energy independence of Ukraine begins to increase the use of the Ukrainian gas coal, in parallel, reducing the need for the country’s import of anthracite. The company noted that this will be converted to the blocks of thermal power plants from coal to gas for hard coal, and the mines of DTEK increase production of gas coal in 2017 9% by 2016, to 23.1 million tons. Transfer of the plant to gas coal is engaged and the state company “Centrenergo”.