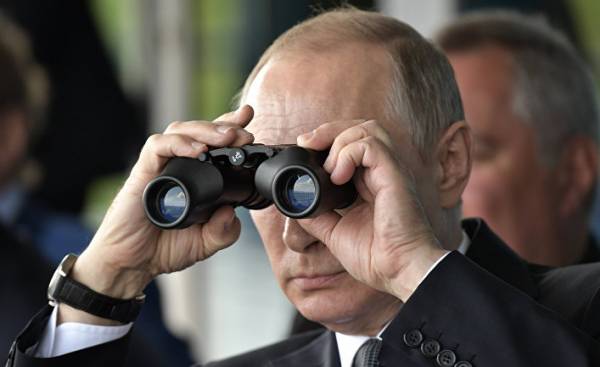 — This study was conducted to shook the market message trump on Twitter about the “fire and fury”.

Russian President Vladimir Putin has little trust when it comes to approach to world Affairs, as evidenced by the results of a survey conducted by the research center Pew Research Center. However, for this indicator, it is ahead of its American counterpart, Donald trump. “Although the level of confidence in Putin’s approach to international Affairs is generally low, in many countries, he is trusted more than the us President Donald Trump,” reads the Pew research company, focused on Russian power and influence. Pew — non-partisan research organization located in Washington, DC.

On average, 60% of people in 37 countries, including the United States, distrust to the actions of the Russian leader in world Affairs, while 26% think he is doing a good job. Experts from the Pew did not provide relevant statistics in relation to trump the study focused on Russia, however, of the 36 countries where the question was asked who they trust more 22 countries, including Germany, France and Japan, have more trust in Putin than Trump. This is evidenced by the results of a survey conducted in the spring of 2017.

This study was conducted from 16 February to 8 may this year, that is, it was before trump led the world markets in a nervous condition his message on Twitter threatening to unleash “fire and fury” on North Korea, if this cut off from the rest of the world regime will be to threaten the United States with any of its Intercontinental ballistic missiles. This was also before signing with trump bill on strengthening sanctions against Russia over Ukraine. In response, the Kremlin made a decision about a significant downsizing of the U.S. diplomatic mission.

Trump in the country is still ahead of Putin’s results. According to Pew, 53% of Americans trust the Trump, while Putin is trusted by 23% of the population of America. About a third of the surveyed Nations believe that Russia is a major threat to their countries, and about the same level of worrying are China and the United States.

Trump walked around Putin’s level of trust in 13 countries, including the United Kingdom, India and Israel. In addition, the results were better in Ghana and the Philippines, where both leaders are expected to attend an international summit later this year. In Tanzania, the two leaders caught up on the indicators. Results in the United States — the United States participated in this study — this question was not included, and in China the survey was conducted.

Most Russians believe that Putin has improved the position of his country in the world. Meanwhile, the perception of the Americans and Russians each other became less sharp. According to the research center Pew, the number of Russians with a positive attitude to the United States increased to 41% (15% in 2015), while 29% of Americans were more positive towards Russia (22% in 2015).