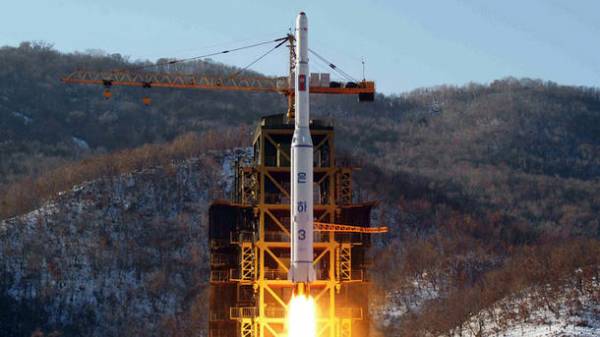 Ukraine is once again in the center of an international scandal. The authoritative edition of The New York Times, based on the report of the International Institute for strategic studies (IISS), said that the secret to success Intercontinental ballistic missiles, North Korea capable of reaching the United States, could be a Ukrainian rocket engines, produced by “Yuzhmash”. At the Ukrainian enterprise information NYT denied, and NSDC Secretary Alexander Turchinov said that this misinformation is Russia. Agree with him and international experts, saying that this involved the Russian special services, because the author of the report, which is based on the NYT, long time worked in Moscow. While Washington has not officially commented on the NYT article, as Kiev does not impose any charges. But experts advise Ukraine not to expect a new wave of scandal, and to take the initiative in their own hands – to start his own investigation with the assistance of international experts.

The title of a controversial article of The New York Times, published Monday, was: “North Korea’s missile success is associated with the Ukrainian factory, the researchers say”. The authors refer to the report of the IISS expert Michael Elleman, who examined photographs of North Korean leader Kim Jong-UN during an inspection of new missile engines and came to the conclusion that they are made on the model RD-250, which were the basis for running system missiles SS-18 “Satan.” They, according to the publication, over the last two years has helped North Korea to achieve significant progress with the medium-range missile “Hwasong 12” and a ballistic “Hwasong-14”.

Engines, according to the NYT, was made only a few plants on the territory of the former USSR. And for some reason the authors focused their attention on the Ukrainian “Pivdenmash”. For NYT Michael Ellemann suggests that, perhaps illegally, engines to North Korea came from Ukraine. Although in its report to the IISS expert indicates that the post-Soviet origin of the engine without reference to Kiev. The authors of the article in the NYT does not exclude the possibility that North Korea could acquire a powerful rocket motors on the “black market”. They remembered the case like 6 years ago in the river detained two citizens of North Korea who were trying to steal the secret drawings of rocket launchers. They were detained by SBU, charged with espionage, and in 2012 the court sentenced them to 8 years in prison.

NSDC Secretary Oleksandr Turchynov said that Ukraine has never supplied to North Korea rocket engines and technology. “We believe that this anti-Ukrainian campaign provoked by Russian special services to cover up its involvement in North Korea’s nuclear and missile programs,” – said Turchinov.

According to Deputy Minister of information policy Dmitry Zolotukhin, Michael himself Ellemann in the late 90’s he worked as program Manager for the reduction of missile weapons in Russia and directly communicated with representatives of the Russian security Council and the FSB. Ukrainian and American experts and analysts, commenting on the NYT article, I do not presume to enroll in Alleman agents of the Kremlin, referring to his previous professional enough reports. Besides, according to them, the experts, The authoritative Bulletin of Atomic Scientists also suggest that last autumn and this spring, North Korea has been testing rockets on the engines of Soviet origin the RD-250. But from Michael Elleman want to hear more solid arguments, not just the conclusions based on the analysis of photographs.

In General, according to the analyst of the Institute of world politics Nicholas Belenkova, if you compare the NYT article with the report of Michael Elleman in IISS, among them really are a lot of differences. And in the article, emphasizes the analyst, the emphasis is placed, therefore, that the impression that the blame is Ukraine. Besides, two months ago, the information presented in the NYT, has already been published in other American media, but somehow it now came to the fore. Later in his Twitter Ellemann denied the accusations in address of Ukraine, saying, “Yuzhnyy” (“southern at “Pivdenmash” – Ed.) – one of several possible sources of production and supply of engines, others are concentrated in Russia.

“Moreover, what else do not say that in Ukraine these engines are collected, but the launches were produced in the Russian Federation. That is, the final consumer of the Russian Federation. And second, we don’t know how many companies were involved in cooperation in developing this engine? Clearly “Pivdenmash” this engine is not done completely. Most likely, some parts made by themselves, and some received from Russia and other former Soviet republics. And even when the missiles were removed from combat duty, they removed the engines, it was all done in Russia. We have missiles SS-18, in question, was not” – said the “Today” Nicholas Beleskov.

In the “Yuzhmash” said that during the years of independence Ukraine did not have any ballistic missiles either for themselves or for Russia or for any other country. Moscow never contacted the GP “CB “South” for the creation of new versions of the missiles SS-18, and Ukraine’s international obligations would be unable to do so. “Since 1991, the technological line on production of engines in the enterprise “AT the “Yuzhmash” with characteristics similar to the RD-250, was partially dismantled. Production line for ballistic missiles SS-18 and engines for them was completely destroyed. In view of this, currently the company does not have production technology for the manufacture of rocket motors specified configuration”, – says the statement of “Yuzhmash” adding, the only engine note in the “Yuzhmash” which ever shipped as a separate component – engine VG143 for the fourth stage of the European rocket Vega.

In Goskomiteta the Agency said that until 2001, by order of Moscow “Pivdenmash” has produced engines for the two non-combat space project “Cyclone-2 and Cyclone-3”. It was made 111 rocket “Cyclone-3” and 122 rocket “Cyclone-2” and all the launches were successful. “Alone no supply engines of Ukraine did not fulfill all the time of independence since the development of this equipment to the Ukrainian enterprise “Yuzhmash” and accompanying CB “southern”. Therefore, the statement of Alleman is completely unfounded. Ukraine has been supplying engines only with missiles. Moreover to these engines and rocket backtrack, you must have access to the production technology of rocket fuel. This technology, Korea has not. Have two countries, by and large, is Russia and China”, – said the acting head of the national space Agency of Ukraine Yuriy Radchenko.

Experts believe that the RD-250 in North Korea could be it, because for anybody not a secret that Russia supports North Korea. “The sale of Ukraine’s documentation or sale of the technology to date, I believe little. In North Korea there is no such plant that could reproduce the technology. In laboratory conditions to collect this engine is practically impossible. The most realistic option – Russia is supplying launch vehicles to North Korea,” said “Today” military expert Oleg Zhdanov.

While both Ukrainian and Western analysts point out that if Ukraine was really involved in the supply of engines to North Korea, this information has long been interested in U.S. intelligence and the state Department. Moreover, articles about the report, as mentioned above, in the American press there two months ago and this information no one was interested. It is also unlikely that today’s missile scandal will undermine the reputation of Ukraine as it was with “mail scandal” (when Ukraine was accused of selling to Iraq bypassing UN sanctions radar complexes “Kolchuga”). However, experts advise to ask “Yuzhmash” documentation produced and delivered to the Russian Federation engines for launch vehicles. And the Atlantic Council added that this process is better to engage an international expert group, which easily proves that in this story clearly has a Russian trace.