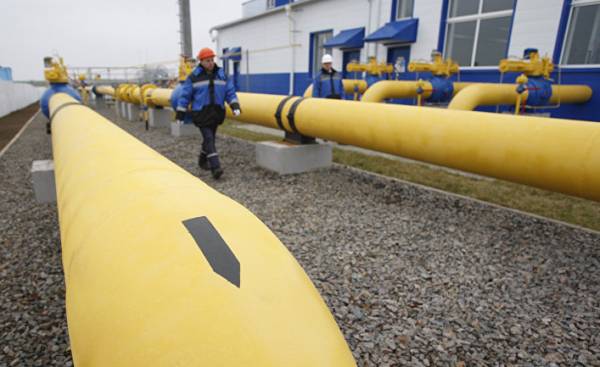 Gregor Selgin (Gregor Schöllgen), the famous German historian, for a moment left the area in which it best understands: the history of Germany and its foreign policy. He wrote an equally remarkable, as scandalous text on energy issues. Specifically, about the Soviet-German and Russian-German cooperation in this area, which has long been considered controversial. Selgin thinks it so Grand, so meaningful, that once hung on his label: he calls it modestly and simply — “European energy policy”.

Selena article was published (August 4, in the newspaper Frankfurter Allgemeine Zeitung) under the ambiguous title: “Sugar, too, wants to be refined”). Subtitle: “How the conduit: America declares war on Europe by its interference in joint with Russia energy policy. Why?” The reason for writing this article is clear: America has decided on new sanctions against Putin leads Russia as punishment for the apparent interference in the election campaign of the United States, and continued (ill-concealed) military actions of Russia in Ukraine.

New sanctions that Congress almost unanimously endorsed, can affect several European companies that plan to participate in the construction of a second Baltic pipeline (Nord stream — 2). Here the historian, who is known for his sympathy for the SPD, burst of anti-American feelings, American bosses are digging the pit bosses of the Russian (and Putin in particular); they want out of the market, Russian gas, us liquefied gas. Perhaps this is true. And that’s all? Gas is gas, why is the American gas Selgin prefers Russian gas, which is becoming more and more dependent Germany? Why, I would like to ask him. Isn’t the desire for diversification of energy sources, the old mantra of a European energy policy? Or this mantra is operated only while the project was all new pipelines Russia?

The last book of Selena, which the reader, unfortunately, do not know, was issued two years ago, the biography Gerhard Schroeder; an article in the newspaper suggests that the biographer this time too he made friends with his hero, from which he received many certificates and letters, as well as “unhindered access to all witnesses” (!). American action historian seriously calls “a Declaration of war on Europe.” Containment of the Putin regime is a Declaration of war Europe? In the end, Seligen he wrote in the biography of Schroeder about the “undisguised Imperial ambitions and claims of Russia for revenge”.

Recall that Chancellor Gerhard Schroeder in the last weeks of his reign, signed a contract with his then and current friend of Putin on the first Baltic gas pipeline Nord stream — 1; only a few weeks later, Putin announced that his friend would be the head of Committee of shareholders of this project. With a huge salary. The rapid transition Schroeder drew criticism and misunderstanding, even in his immediate environment.

Many of his foreign partners, as, for example, his buddy, the President of the Polish social-Democrat Aleksander Kwasniewski (Aleksander Kwasniewski), was mainly concerned about the political security of the contract of Putin and Schroeder. Because the one who is versed in history, can guess, can lead to the abuse of this pipeline. About it had often warned in this newspaper. Energy is arms. Especially for the Soviet Union and, obviously, for the new Russia, too, both countries have to rely on intimidation more than others, because of their state of the model has nothing more to offer: decades of energy there — the most powerful weapon, next on the list once for military.

Why to argue against it, asks Selgin. It’s simple: because Stalin, Gorbachev, Putin again and again used this weapon. Stalin — during the blockade of Berlin in 1948/49, when each of the briquettes have been delivered via air bridge; dear Gorbachev, when in 1990 he closed the gas valve in occupied Lithuania, who aspired to independence; Putin and energy injections against many neighbors and, finally, the winter “gas wars” of 2006 and 2009 against Ukraine, with consequences for many EU member States. The historian ought to know about it. Did Putin more peaceful since then? Or legal culture in Russia improved?

The recent machinations with gas turbines Siemens, who, despite the personal commitment of Putin Minister Sigmar Gabriel, were set instead of the agreed place in the occupied Crimea, show how this state of Affairs. Useful lesson. And also mantra cooperating with Russian energy concerns that this partner still is a reliable supplier (note: for Germany), now appears in a different light: Russia (under Putin) is not acting in accordance with the agreement, Russia is acting solely in accordance with their interests, which can change overnight, and the legal, economic or even financial aspects will be second – or third-rate.

Doubt, when Selgin writes that Europe is today, also thanks to the construction of “terminal for liquid” (he is referring to the terminals for liquefied natural gas) — is “quite independent of the energy situation”. Really? The dependence of the EU and Germany from imports in the consumption of fossil fuels has significantly increased since 1990 (EU — 73%, Germany — 79%). Russia is the largest supplier for the EU and for Germany in all sectors: gas, oil, solid fuel. And that Germany has made itself dependent not only on the supply. Almost half of large storage facilities in our country already has Russian shareholders. The largest gas storage facility in Western Europe in Lower Saxony is fully owned by Gazprom, and therefore the Kremlin. The scammer is the one who think about it bad.

Back to the historical dimension. The most amazing article of Selena: energy policy, which satisfied the interests of corporations and the Kremlin, he calls “one of the oldest and most successful areas of European integration”. And he even puts the German-Soviet-Russian cooperation on gas near the European coal and steel community, the predecessor of the EU. Incense for Nord stream. The mystical exaltation.

But if we are talking about history, then, please, about the whole story. Since the early 80-ies it is known that the builders of the first Soviet-German gas pipelines were political prisoners of the camp system the GULAG, sent to forced labor. Then in the forest, they laid pipes of Mannesmann. Some of them because they were Russian Germans, and later managed to leave the country and tell the Federal Republic of its history. Yes, it’s a project founded on forced labour, the new European myth of creation?

Now some German corporations have experience in the use of forced labour, as well as conceal these ugly facts. We don’t want to talk about compensation, it is rather a case of the Russian state, but isn’t it time the followers of this Russian-German project of the century to build a small Museum in honor of those forced laborers? It could bring many new visitors to the Central offices involved in the projects ENGIE, OMV, Shell, Wintershall and Uniper or, of course, Gazprom in Moscow. Schroeder and Putin could give a speech at the opening. And a German historian would welcome curator.