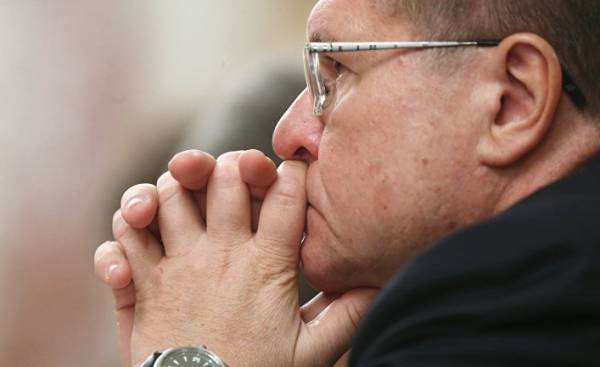 The process began with preliminary readings behind closed doors. After that, Ulyukayev said that was a “vile provocation”. The investigation against him is beneficial in his words, “corrupt officials”.

The detention of the speaker in November last year shocked the political elite of Russia’s first since Soviet times was arrested acting Minister. However, this case cannot be considered a testimony to the uncompromising fight against corruption. This process is considered more as a part of the struggle for power in the country. And benefit from it the powerful head of Rosneft Igor Sechin.

Even the circumstances of the detention of the speaker aroused some suspicion. Late on 14 November, the Minister of economy came to the Central office of Rosneft. News Agency Reuters reported that there was agreement on a personal meeting with Sechin. There the speaker allegedly received two suitcases with cash. And according to Russian media reports, one of these suitcases Ulyukayev picked up, after which a special liquid is applied to the handle remained in his hands. Speaker was detained, and soon dismissed from the post of Minister.

He allegedly extorted the money for the decision in favor of a takeover by Rosneft the company “Bashneft”. The whole story of Bashneft demonstrates how the state capitalism in Russia and how the influence of Igor Sechin, is included in the inner circle of President Vladimir Putin. Oil company since 2009 belonged to the group “System”, and in 2013, Bashneft became interested in Sechin.

The owners of the company said, however, that were interested in it and others had planned the IPO. But if nothing happened in 2014 to the basic owner “Systems” Vladimir Yevtushenkov was filed for “money laundering”. Billionaire was released only after “Bashneft” was forcibly deprivation.

Two years later, the Russian government announced a program of privatization with the purpose of replenishment of the budget. Thus, I had to sell, in particular, 50% of shares of “Bashneft”. The company had nine interested parties. The Minister of economic development Ulyukayev believed involved in these “bidding” “not the best decision.” But Sechin, in the end I won. In October of last year 50.1% of shares of “Bashneft” s worth about 4.6 billion euros was sold to Rosneft. Say the company was the only one who was going to buy securities. The Kremlin and the government gave “good” on this deal.

Whether the speaker wanted to get this “reward”? “You have to be crazy to a month after the formal legal and political approval of the transaction than to threaten Rosetti. Or to extort Igor Ivanovich Sechin, is actually one of the most influential people in our country, two million dollars”, — said on this occasion, the President of the Russian Union of Industrialists and entrepreneurs Alexander Shokhin. The charges against the speaker, he said “neither proved nor rational”.

In recent years, Russia senior officials increasingly got under court for corruption charges: three governors, the staff of the Investigative Committee and a Deputy Minister of culture. A possible explanation for this trend was given by the analyst Ekaterina Shulman: “the less resources, the higher is the competition.” In addition, the struggle between different power groups could escalate due to the economic crisis.

However, no one could come to start investigations against Sechin or anyone else from Putin’s inner circle. In addition, the Russian justice often surprisingly gently treats former officials and, in addition, cases of corruption acts at its own discretion. Alexei Ulyukayev in the worst case threatens till 15 years of imprisonment, and in the best case — a monetary fine in the amount of several million. State television on Tuesday suggested that a former Minister faces a sentence “close to minimal”. No matter what it meant.