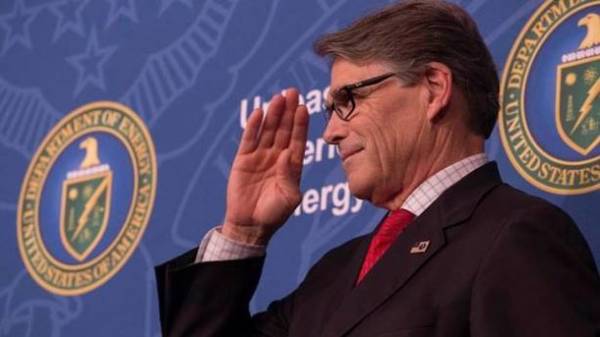 The Minister of energy of the USA Rick Perry will arrive in Ukraine in November – his tomorrow’s visit postponed in the aftermath of the raging in the USA hurricane “Harvey”. About it reports “Interfax-Ukraine” with reference to the U.S. Embassy in Ukraine.

“Yes, the Minister has postponed his visit,” said the Agency in the U.S. Embassy.

It is reported that the cause of the postponement of the visit to a later date is a hurricane “Harvey”, which caused devastating damage to the state of Texas, where he remains the Minister.

As have informed in a press-service of “Naftogaz of Ukraine”, which was preparing a presentation for the arrival of Perry, the visit of the Minister of energy of the USA has been rescheduled for November.

“We believe it is important to engage with key international partners of Ukraine at the highest possible level. However, because of the hurricane “Harvey” in the United States this week, the American participants, including the Minister of energy Rick Perry and the President of OPIC ray Washburne, were forced to revise their plans and will not be able to visit Kiev”, – stated in the message.

As previously reported in the U.S. Department of energy, Perry was supposed to arrive in Kiev tomorrow, August 29, at the head of the American delegation.