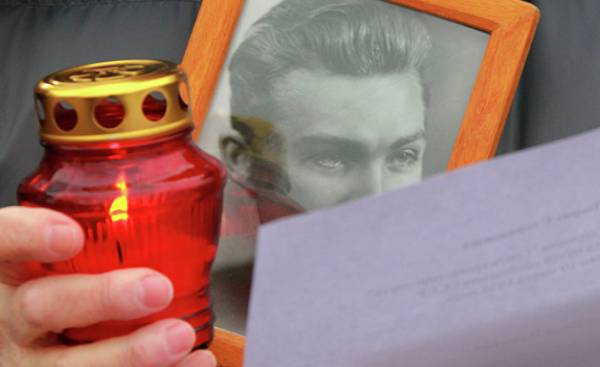 Interview with Tomasz Sommer is the author of “anti-Polish operation of the NKVD, 1937-1938”.

— Polonia Christiana: August 11, 1937 began the “Polish operation of the NKVD”. Such date is on the Operational order No. 00485 of the people’s Commissar of internal Affairs Nikolai Yezhov. This document marked the beginning of the genocide of poles living on Soviet territory.

Tomasz Sommer (Tomasz Sommer): actually it all started about three months earlier. First kill the members of various Communist organizations, including the Communist party of Poland. In addition, especially in Ukraine, was started in 1933, the processes of the members of the Polish military organization. “Full force” genocide, however, launched on 11 August 1937.

— Why don’t You use the official name, and called the extermination of poles 1937-1938 “anti-Polish operation”?

— The name of the “Polish operation” was invented by the historians, it appeared in some documents. But you’re not going to call the Holocaust a “Jewish” operation, you are at best accused of anti-Semitism. So, in my opinion, to call the genocide of poles “Polish operation”, as the name indicates, if the poles did something, or that these actions were Polish character.

But the operation of the NKVD is the opposite, so the name “anti-Polish operation” seems to me the most accurate and faithful.

— What were the “technical side” of this deadly operation?

— If to describe briefly: there was an official order, the killings began. The poles killed at the same time with the victims of other “operations”. They got lists of people slated for extermination, along with many others. Those who have brought a death sentence, did not penetrate, on what basis he made, they just pulled the trigger.

The NKVD not only killed. Of Your books, they also engaged in looting and robbery.

— Yes, but the worst was fixed operational orders complete confiscation of property: everything that was shot, was confiscated, and his family were thrown into the street. Relatives acted according to Operational order No. 00486: wives of the “enemies of the people” were sent to camps for adults and children — in the camp for minors, which was transformed later into something like children’s homes. Because of the huge scale of repression failed to finish. According to rough estimates, such a fate befell about 8 thousand Polish women and children.

— Was there some legal basis, the verdicts of the courts on the basis of which one could “legally” kill the poles?

The genocide was carried out in an extrajudicial mode, which in the USSR began in 1936, and constantly “improved”. No judgments or verdicts of guilt were not! The basis for the implementation of Stalin’s orders was a certain parameters.

— How did you find out that the person they correspond to?

— Had seven points. Let me emphasize that in none of them the word “pole” doesn’t work. There is, in particular, talking about members of the Polish military organization, “Subversion and espionage and guerrilla footage” and “the most active part of local anti-Soviet nationalist elements of Polish regions”. If you combine these points, clearly shows that these parameters correspond to almost all poles who lived on the territory of the USSR.

This resembles the situation with the Holocaust. Because there is no such document, which explicitly told to “destroy all Jews”. The Germans used different wording, e.g. “final solution of the Jewish question.” Same thing with “anti-Polish operation”: the wording “kill all poles” in the document no, but it lists “category of enemies of the people”.

How was the execution?

— In Katyn: the officers of the NKVD shot the poles in the back of the head.

What happened then with the remains of those killed? After all, they were several times more than those killed in Katyn officers.

Even a half dozen times more. Let me remind you that in addition to “anti-Polish operation”, which was the second largest “component” of the Great terror, was also a “Kulak” and other major “national” operations, for example, German. The great terror as a whole has claimed the lives of 750 thousand people.

The bodies of the victims lie in unmarked graves that can be found around almost every major city of the USSR. At Moscow, Kiev and Minsk, there are at least a few such places. Some graves have already been discovered, but most still hiding under the ground.

— Will it be possible ever to ascertain the names of all the victims?

— I think if the political will is not presented special difficulties. We know where we are interested in documents, but politicians are unable to access them. If in the case of the Holocaust there was no information, often had to rely on the reports of witnesses or executioners in the Soviet Union everything was recorded and got at least three different files.

— Why is genocide so carefully documented?

— It’s all in the Communist bureaucracy and the system within which it functioned. There was such a thing as a special mode of approval of such decisions. Lists of names subject to the execution of poles were sent to Moscow — “the two”, which consisted of Nikolai Yezhov and Prosecutor Andrei Vyshinsky. They again carefully looked through these documents and maintained them. So all the lists with names of poles killed there, apparently, in Moscow. After approval, the documents were returned to the regional level, with orders to lead out the sentence. After the shooting reports were drawn up, who were returning to Moscow. These documents are available, for example, in Ukraine.

Going back to your last question: I think, with a corresponding desire of the authorities we could find and identify all dead poles.

— Why all the documents related to “anti-Polish operation” has been preserved, and on the Holocaust almost no documents?

— The Germans had a lot of time (over two years) to destroy all paper. They knew they were losing the war and decided to get rid of the evidence. In addition, de facto they were killed “unlawfully”, because their leader, Adolf Hitler, did not give the official order to begin the Holocaust. In turn, the official order of Stalin regarding the “anti-Polish operation” has been preserved and is now in the Moscow archives.

Stalin remained in power until 1953, that is, within 15 years, “anti-Polish operation” was not considered a crime or genocide, something of a “secret action”. Later, when Generalissimo succeeded Khrushchev to inform about this case, too, there was no need, especially as a Ukrainian himself took an active part in extermination of poles. Then about this, all forgotten. The documents were in the archives, and no they did not look.

— Did the poles be saved?

— Most often they were just in hiding during the Soviet raids, there have been cases where people have declared themselves dead. But, unfortunately, most poles simply did not know what is happening even in the moment when in their town or village, there was the NKVD.

— Why is “anti-Polish operation” decided to stop?

— A large role was played by personnel changes, which were prepared by Stalin: he wanted to remove comrade Yezhov and put in its place comrade Beria. The great terror, including the “anti-Polish operation” was stopped by his order dated November 22, 1938. The destruction of the “survivors” continued until January 1939.

— There are, perhaps, the most important issues. What was the meaning of the Great terror? Why Stalin decided to stop the machine of destruction?

— Stalin wanted to get rid of real and imaginary enemies, and the poles were one of them. Guided by the principle of “the death of one man is a tragedy, the death of millions is a statistic”, he decided to destroy all in one fell swoop. However, at some point he created the system started to slip: the contents of the murderers of the NKVD and the production of bullets for shots to the head didn’t have enough money. Here it is necessary to stress one point: everyone used to say that the murder of poles at the hands of the NKVD. But it is not, after all, the organization was only obeying orders of Stalin! Of course, the employees of this criminal authority carried out the order with special zeal, but, nevertheless, the responsibility for all the bears Stalin, who controlled the situation.

— How did you react to “anti-Polish operation” of the Soviet population?

As he had been taught propaganda, the poles called enemies of the people. A simple Soviet citizen did not know what the NKVD, but in 1937-1938, there was a sharp jump in the number of denunciations. In those years, as during the French revolution, the death sentence was quite some suspicion, even if the condemned were not clean. As I said above, nobody involved in proving guilt, the goal was to destroy “enemies of the people”!

— According to official figures, the NKVD, killed more than 111 thousand poles. You could…

I’m sorry, but I interrupt you. Something like “official NKVD data” does not exist. 111 thousand is just a rough estimate that in the early 1990s published the “memorial” society. In his research it was based on documents that concerned only some parts of the operation — both in terms of time and categories shoot people. Progress reports on “anti-Polish operation” was in the NKVD every 10 days. For this we have created a special Bureau of statistics, which on the basis of incoming reports had estimated the number of dead. The data of the “Memorial” is just one of the stages of these calculations, and who knows what.

There are still data Professor Mozohina estimated that until mid-July, 1938 93 killed thousands of poles. There are complete data concerning Ukraine. This figure is more than the one that says “memorial”. On this basis, I believe, we can with great confidence say that a victim of the Great terror fell at least 200 thousand poles. I agree with this assessment, the historian Nikita Petrov, he mentioned this figure during a conference held in early July in the Polish Sejm.

— At the end of our conversation, I would like to ask question about the following “anti-Polish operation”, which was developed in 1941-1942. Then, the Soviet Union began the mass deportation of poles from the Polish territories it had occupied since 17 September 1939. Can we call the killing and sending hundreds of thousands of poles to Siberia, a continuation of the events that took place two years earlier?

— Of course. It was the same thing, only in another form. The goal also was to destroy “the most active poles.”