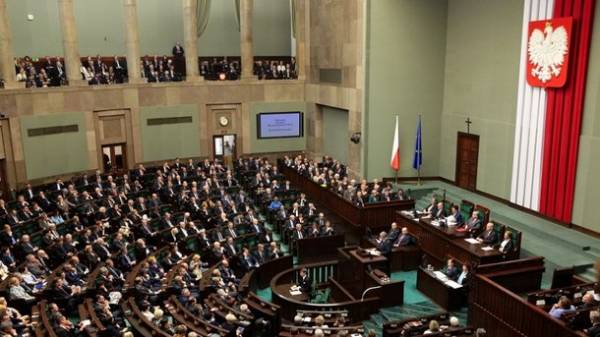 Poland does not recognize the annexation of Crimea and supported the territorial integrity of Ukraine within its borders recognized by international law, it said in a statement the Ministry of foreign Affairs of Poland, transfers TV channel “112 Ukraine”.

“Three years ago, the Russian armed forces began the takeover of Crimea. Illegal “referendum” was held under the cannon and on March 18 it was announced that the Crimea became part of the Russian Federation. Poland does not recognize the so-called annexation of the Crimea and unwavering support for the territorial integrity of Ukraine within its borders recognized by international law”, – said in a statement.

Polish diplomats urged Russia to “put an end to the” occupation of the Peninsula.

“Until then, we stand for the preservation of sanctions by the European Union, USA, Canada and other countries against Russia in response to its illegal actions. Restoring the foundations that underlie cooperation and security in Europe should be a priority for the entire Euro-Atlantic community”, – reported in the Polish foreign Ministry.

The statement also says that Poland is concerned about the situation of human rights in annexed Crimea, especially in relation to the Crimean Tatars.

“We regret that the Russian authorities denied access to the Crimea international organizations that monitor human rights. We condemn the persecution in the Crimea, to fight the resistance, and the strengthening of the position of the occupation authorities. We are equally concerned about the creeping militarization of the Peninsula,” the statement said.

The foreign Ministry called this situation a direct threat to the countries of the black sea region and a favorable condition for the destabilization of the entire Eastern and southern Europe.

“The fact that the structures of the UN, OSCE and Council of Europe do not have the opportunity to work in the Crimea led to the creation of “informal zones of lawlessness” in the heart of Europe”, – convinced the Polish foreign Ministry.

Russia annexed Crimea after the illegal referendum on 16 March 2014. The annexation of Crimea by Russia is not recognised by Ukraine and most countries of the world. In the moment between mainland Ukraine and the Crimea there is an access control regime, and Kiev de facto controls the Peninsula.