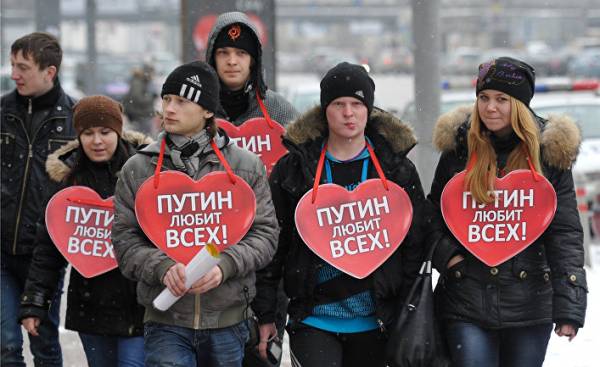 It was a blow to Lev Gudkov: last fall by the Levada center, the last independent social Institute in Russia, was declared a “foreign agent”. Hooters directs the center for eleven years. Now he speaks about change of status is probably due to the fact that it did not affect people’s willingness to answer questions of sociologists. However, the work with the authorities was complicated, says Gudkov.

Levada-center conducts surveys not only among the population but also among the officials — for example, projects that relate to the quality of education and medicine. In some regions the FSB is putting pressure on the government that they didn’t speak c sociologists. And work with foreign partners also had to be discontinued.

Now 70-year-old hooters plans to apply for an exception from the list of “foreign agents”. For many years, the renowned sociologist examines how changing post-Soviet society, and discovers that the past still has an impact on people, including the younger generation.

Die Welt: In March 2018 in Russia will take place presidential elections. Vladimir Putin is that he says that he will think whether to participate in them. This tactic makes sense if you look at the polls?

Lev Gudkov: This coquetry? Yes, the less he speaks, the more stable is the stand against him. The propaganda machine is already working. Putin is constantly present in the media. All of his trips extensively. Hours hotline or communicating with children is broadcasted in live. On the TV show, as he gives instructions to officials. State populism plays an important role. We see in our surveys that the willingness to vote for him is gradually increasing — from 40 percent in January to 63-65%. This is a pretty strong mobilization. And now he forces himself to wait. People must ask to on rules. This is the clear preparations for the elections. Thus spreading the impression that there is no alternative.

— The most important thing for Putin — his foreign policy successes. He plays a symbolic role of leader of the nation, which espoused the cause of national unity, security and international prestige. It creates a sense of pride when I say that, I mean not that this pride is justified, imaginary, right or wrong But what it is, it’s a fact. Foreign policy — the one area where most of the population is of the opinion that Putin has achieved great success — the consequences of confrontation with the West, the annexation of Crimea, war in the East of Ukraine and in Syria. In domestic politics he soon failures — the lack of economic growth, corruption, and terrorist threat that is still present. But as often happens in dictatorships and authoritarian regimes, blame others — the government or the governors.

— In recent years, an increasing number of regions again and again protests, for example, truck drivers and rural residents.

— These protests have a fairly high level of support. The protest of truck drivers on television is practically not misleading, but they are supported by 40 to 45% of the population. Protests by rural residents are less known, but they, too, support, empathy. However, only a few are willing to join the protests.

— That is, this will not have a major political movement?

— No, although the economic situation is not getting better. After the sanctions and falling oil prices plummeted and the assessment of their own purchasing power. Now people adapt to the crisis. There are reasons for dissatisfaction, but all conflicts and strikes remain at the local level. There is no organization which could coordinate the protests across the country and to promote mass support.

— How is the situation with the anti-corruption protests of opposition leader Alexei Navalny?

— They get less support, even if the issue of corruption is important for people. It is perceived as a given. One scandal comes after another. According to my rough estimates, each year from 850 to 900 reports that against the official criminal case is brought. It creates a picture of an absolutely corrupt state apparatus — this assessment is shared about 80% of Russians. However, corruption is like the weather as climate. In Russia it is cold in the winter. Individual stocks Bulk supported, but in relatively small groups.

— What are the chances Navalny in presidential elections?

— Bulk — talented politician. Unlike other oppositionists, in heavy conditions of media isolation, he has managed to create its own network. Over the past two years know him 55-56 percent of Russians. However positively it is estimated only 6-7%. Against it has a strong propaganda machine. It is very effective, especially in the regions. It is positive to include, mainly in large cities. In Moscow, it supports nearly one in four, that’s a lot. In total in Russia would vote for him 3-4%. Of those who are willing to go to the polls, at most, 10%.

After two protests, the impression that it is supported, primarily, young people. Growing a new, fearless generation?

— I believe that this is a distorted perception of journalists. Age most of the Navalny supporters from 25 to 40 years. In the latest protests, indeed, participated more young people. But that’s not the whole generation, and especially the children of the middle class, which adopted values of the parents. Over the past two or three years there is a new wave of patriotism in school children again more implanted ideology. Young people in large cities perceive this as violence. Hence the resistance is partly moral, partly aesthetic protest. But it is a very thin layer, 2-3% of all young people.

— And the rest of Russian youth?

— Strictly speaking, young people more supportive of Putin. They grew up under Putin, more susceptible to propaganda. Possibility of free travel, entertainment, Internet, a higher standard of living — all this for them completely natural. They, unlike the older generation, I don’t know how much it cost. At the same time, young people in the province more pronounced inferiority complexes, characteristic of the times that followed the Soviet collapse. They have a sense that the country has become better, that is, Russia became a normal country, but internationally it is still not accepted as a normal country, and as backward as a gangster state. This is the missing recognition is perceived very painful, primarily youth, who need confirmation.

Is happening, although more and more people have access to the Internet and alternative sources of information?

— You can lead a horse to water but you cannot make it drink. Many people do not want to get alternative information, because it does not meet their expectations. Propaganda more convincing. And even if people do not believe in propaganda, they have no alternative picture of reality. Propaganda says that the us is better than in the West, she says that life is bad everywhere. It is very effective. It kills hopes for change and willingness to participate in political life. More than 80% of Russians say that they have no influence on policy. But if you ask them, if they would like to get it, the majority says no.

— People do not want to change the government?

— They there are no definite opinion. They say in principle “Yes, the rulers must change, but in this specific situation better if the government remains Putin.” With him are the hopes for economic stability on growth, as it was in the period from 2002 to 2012.

— If these hopes were not fulfilled, it will support and in six years?

— We need to wait. Incomes will fall. This means that support will fall — unless there is something like war in the Donbass, in Syria or conflict with Turkey.

— Each conflict raises the rating of Putin?

Every conflict gets the country into a state of isolation — abandonment of changes, the willingness to continue to endure. This leads to a consolidation of power. Russian society is still largely Soviet society was closed to the public, with a strong paramilitary views. Propaganda is not only discreditied such Western values like liberalism, democracy, human rights and dignity. Revived views from the Soviet era, for example, that the West is hostile and that you need to sacrifice and suffer for the sake of national security.

Is not changed after coming to power of Donald trump in the US?

— The absolute peak of anti-Americanism was made after the annexation of Crimea. After this negative attitude toward the United States began to wane. After winning trump’s anti-American rhetoric is highly slept on. But when it became clear that trump is not ready to restore relations in Russian conditions, the promotion once again became more intense. The negative sentiment has strengthened again.

It became known that Poroshenko discussed with Merkel