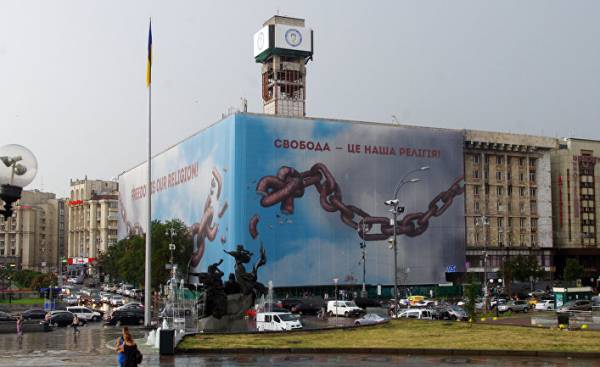 Sometimes our foreign partners would like to talk more about homework Ukraine, for example, the fight against corruption, strengthening of democratic processes, transparency, economy, smart personnel policy — all this is undoubtedly important and true, just not to talk about their obligations, such as guarantee of Ukraine’s security and the protection of human rights on the European continent.

Often our European partners make strong statements in defense of the Ukrainian, but are silent as to the mouth water typed, according to the arrest in the Crimea, the harsh sentencing of the Russian occupation authorities against Ukrainians and Crimean Tatars. You have heard statements by foreign governments about the trial of Balham or Chigusa? I don’t. But some foreign officials suggest we first solve the problem of Donbass, and then the Crimea…

We do not heed this advice. We go parallel to the tracks, step by step and day by day bringing the liberation of the Crimea and the Donbass. Politico-diplomaticheskii way. Reinforcing the Ukrainian army. Because in the occupied Donbas and occupied Crimea are Ukrainian citizens. And the Donbass, and Crimea is Ukrainian territory. We will not allow EU and US to forget about it and remove from the agenda.

Moreover, this perseverance we preserve and protect and the European principles and values. After all, the EU is based not only on an uncompromising struggle against corruption and the teachings on how to build democracy and a bright future, and on human rights, first and foremost, on respect for private property (and private Ukrainian property was robbed Russia stole everything from us in the Crimea and the Donbass). Every day we will remind Europeans and Americans, as if they sometimes do not it was unpleasant to hear. With Russia do nobody in the world wants to fight. We also do not want to fight with Russia. But Russia has attacked our land. And we will defend ourselves. And we will return our land, our territory and liberate our people.

To our valued foreign partners, which we continue to thank you for your support, concern and sanctions are sometimes much nicer to meet with our local yet and the opposition of all stripes, who invariably will tell you how everything is bad in Ukraine, and never will remember about Russia than with the politicians who are reminded of the Budapest Memorandum, hostages and political prisoners, the statistics of those killed and injured Ukrainians stolen in the Donbas and in the Crimea Ukrainian property, of human rights, which simply does not exist in the occupied territories.

In this context, my constant request to all politicians and public activists, some camps and organizations they had no idea: whatever you communicate with our valued Western colleagues and partners, don’t forget they have to say one sentence– about the Russian military aggression and the price that Ukraine and Ukrainians are paying today for peace in the EU.