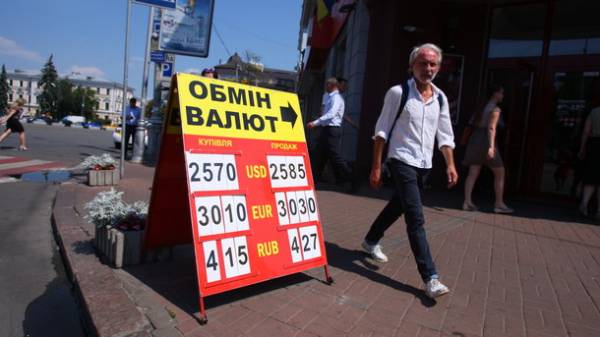 Street exchange points become significant players in the market of cash foreign currency. Non-Bank exchangers, through which before officially conducted only 1% of all foreign exchange transactions in June already occupied almost half of the market. But de facto the flow of customers does not happen, just the exchange began to declare their actual turnover, writes FinClub.

Official volume of the market of non-banking services foreign currency exchange began to grow early in the year. If in December 2016, the street exchangers declared the purchase from the population of 9.5 million dollars and sale of identical amounts, then seven months later, these figures increased more than 30 times:

In reporting the exchange to write that selling bought currency back “in the market”. The balance of their operations, though positive, but insignificant – up to $ 6 million per month.

“Statistics of declaring of volumes of operations has changed after the removal of artificially established administrative barriers”, – explained the Director of Department of licensing of the NBU Alexander Bevz.

Legalization of the market was triggered by the removal of the restrictions which stimulated the development of shadow operations. From January 2017, Parliament abolished the 2% fee to the Pension Fund upon purchase by the population of cash foreign currency. To avoid paying this fee, the exchange informed just has not been officially formalized foreign exchange transactions of customers. Given the close nominal exchange rates in exchange offices and banks in non-payment of exchange gave them a market advantage in the eyes of customers. In addition, the exchange is not carried out the identification, but merely asked to sign the receipt.

The exchangers, unlike banks, did not observe the limit on currency sale to one person is not more than 12 thousand UAH. They crushed large transactions into multiple transactions or even will not be issued. However, in April, the NBU raised the limit of exchange of 150 thousand UAH, which has allowed it to officially purchase in exchange large sums of money. It’s called banks and financial institutions.

“The abolition of the 2% fee and an increase of the threshold amounts valyutoobmen a positive effect on the dynamics and ensure the removal of additional volumes to the shadow market,” says Director of capital markets, Alfa-Bank and Ukrsotsbank Tatiana Popovich.

The struggle for leadership

Changes in the structure of the market shows the increasing weight of non-Bank companies. If the December non-Bank exchange offices conducted operations of purchase and sale of currencies in the amount of 9% of the transactions carried out by banks in January this figure rose to 35%, and by the end of the first half increased by 96% (see graph). Thus the same trajectory is observed in the segment of purchase of currency, where non-Bank exchange offices actively compete with banks, often placing higher rates of purchase than in banks. Therefore, in June their volume of purchases of foreign currency have been growing even with the decline in the inflow of foreign currency from the population.

At the same time, in the segment of implementation of currency non-Bank exchange offices in March began to sell more currency than all the banks in may-June exchangers were sold twice more than banking institutions.

It is now virtually impossible to find an exchanger, where the request for the purchase of foreign currency would have answered with a refusal. On the contrary, the exchange offices sell any amount of required currency, and you will be given a discount card for next purchase, as it did in “Company”. But if the required currency amount is not available, you will be directed to the closest exchange, which will sell the necessary amount and give a card for pre-reservation of large amounts of currency purchase for the future, as it did in a network “Victoria” resumed operation early in the year.

It is now virtually impossible to find an exchanger, where the request for the purchase of foreign currency responded to the refusal

And less than three years ago, the NBU plans to close all of street exchangers. In January 2015, first Deputy head of the NBU Alexander Pisaruk announced the preparation of the draft law “On amendments to the Decree of Cabinet of Ministers “On system of currency regulation and currency control”. The NBU then stated that “the inspection of foreign exchange items, open non-Bank financial institutions, including on the basis of Agency agreements with legal entities has identified numerous violations of requirements of normative legal acts of the NBU in the implementation of foreign exchange transactions and insufficient monitoring by management of non-banking financial institutions over the activities of its own structural units”.

“The lack of adequate control opens possibilities for the emergence of a system of abuse and further increase social tensions. In addition, given that the single legal means of payment in Ukraine is the hryvnia, foreign currency (dollar) cannot be considered as goods of the first necessity, and the Central Bank of the state must not arrange its clock and easily accessible sale”, – stated in the NBU.

The solution to the problem of the regulator was to prevent foreign exchange transactions to everyone except banks. To justify this initiative, the NBU cited data that 99% of the volume of operations on purchase and sale of foreign currency carried out by banks, and only 1% by the financial institutions. “The black market they do not compete and did not help. The economic viability of their existence is not, “should” is full”, said pysaruk.

But the bill has not been developed, and the initiative was once again “buried”. Note that in the NBU Vladimir Stelmakh in 2008, has already proposed to ban street exchange offices, but abandoned the idea after protests by employees of exchange offices.

In the present case, the NBU changed my mind. At the end of 2015, he went the other way: tightening the terms of licensing, at the same time began to massively distribute licenses to new companies. In the summer of 2016 he requirements even weakened. After this he began to identify illegal exchangers and lead them to the registry. And in the regions swept by the wave of inspections. But this market began to experience a boom: the number of exchange offices has increased from 1107 in the beginning of 2015, when they wanted to close, 3276 offices at the moment.

NBU unhappy with the fact that these companies do not pay taxes, although they made use of RRO. In June Alexander Bevz proposed to introduce a fixed fee for each exchange non-Bank institutions, to deprive them of the incentive to understate the payment of income tax. At the time when the NBU started talking about this initiative, they have not yet started a dialogue with the Ministry of Finance, while preliminary consultations with a number of large market operators took place in 2016.

“And they did say that they are not tied to profits tax may be an incentive to show momentum in the financial statements. But then there was RRO,” said gudgeon. According to him, the introduction of a “patent fee”, as in NBU it is called, is not intended to increase the number of taxes. “But if it will increase revenues and add transparency to the market, this is not the case when you have to hide behind the de-bureaucratization, but simply to welcome common initiative,” he said.

Bankers believe this initiative is debatable. “It is too early to talk about the impact of such collection on competition between banks and non-Bank exchange offices: all will depend on its size, order and frequency of payment. In fact, for exchange offices the introduction of such a gathering can be a way for “out of the shadows”, when it is easier to pay one time fee and then show the real volume of foreign exchange transactions and profit. At the same time, the practice of using different players different approaches to the taxation of similar operations, it is hardly possible in principle to consider the market”, – said Treasurer Altmanka Natalia Zhilenko.