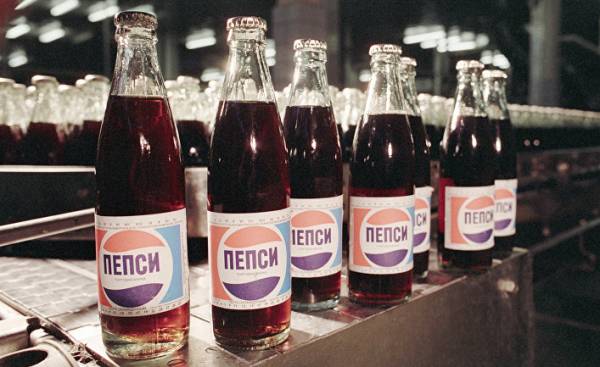 ‘ve all heard about the challenges faced by American entrepreneurs who wanted to sell their products in the USSR during the cold war. Many of them, as was the case with the CEO of Pepsi, Donald Candella (Donald M. Kendall), had to resort to the incredible tricks to make the business work with the Union, are reluctant to lift the “iron curtain” and letting in everything that could smell US and “capitalism”. The company is under the control of tycoon beverage industry first convinced the Communists to allow you to sell your best product on the Soviet market.

“Novel” Pepsi and the Soviet Union began in the summer of 1959, during a meeting in Moscow of the American National Exhibition, which President Eisenhower wanted, resorting to propaganda, to shake the imagination of the Soviet people, showing the capitalist way of life in the United States. At the same time, as pointed out by Rachel Barron (Rachel Barron) in his monograph “Richard Nixon as a politician”, the American government tried to establish rapport with the Soviet leader Nikita Khrushchev, with whom he always had a complicated relationship (no wonder he became one of the protagonists of the Cuban missile crisis in October 1962).

During the exhibition there was a historical dispute between Nixon, who was at that time Vice-President and Communist leader who led the Soviet Union during de-Stalinization. A dispute erupted about the “traditional” American cuisine.

During the exhibition, Kendell very well slipped to Soviet leader a bottle of their famous drink, which he no doubt drank, becoming a character in one of the most emblematic photos of the cold war and the best advertising for the American company.

As President of Pepsi, an American businessman decided to try to negotiate with the Union about the delivery of their carbonated beverages on the Soviet counters. In the course of negotiations with the Communist power, the Americans had to face a major obstacle — how to pay? The ruble was in circulation on international markets, so the businessman from the USA and the Soviet leadership had to go to the trick, to conclude an agreement for the exchange of an American drink on the most famous Russian vodka.

The agreement between the USSR and Pepsi provided for delivery in the United States large quantities of “Capital” on which Kendell was supposed to earn. And so it happened that an American company for the production of soft drinks became the first capitalist to make the drink on Soviet soil.

The Treaty, signed in 1972, has been extremely profitable for both parties: Pepsi received the coveted access to the Soviet market and the Soviet Union (now led by Leonid Brezhnev) has made payments available in abundance natural products.

Soda in exchange for weapons

In subsequent years, the American company opened numerous enterprises in the USSR — their number was 20 in 1989, with the expiry of the term of the contract. Americans and the administration of Gorbachev had to sit at the negotiating table to revise the clauses of the agreement.

This time the solution was found in the form of arms. In the early 90’s the Soviet Union is in the incision painful process of disintegration. Power, which has recently been the main U.S. rival in the struggle for world supremacy, has become a colossus with feet of clay due to the economic collapse of the late ‘ 80s, due in part to the exhausting competition with the capitalists. This race, as rightly pointed out by Julio Sau Aguayo (Julio Sau Aguayo) in one of his books, goes back to the Second world war, after which tensions became apparent during the famous Potsdam conference of 1945.

In that situation the Soviet leadership found nothing better than to offer the American Corporation to pay for its production weapons, which proved unnecessary with the end of the cold war. So Pepsi became the owner of 17 submarines, one cruiser, one frigate and one destroyer, becoming for a short time in the sixth military power in the world. The New York Times quotes an amusing episode that took place in the conversation of Kendall and adviser to the President of the United States national security in the Bush administration, Brent Scowcroft (Brent Scowcroft). Touching upon the issue of payment for products Pepsico weapons, Kendell said with irony to the representative of the government: “We are disarming the Soviet Union faster than you.”