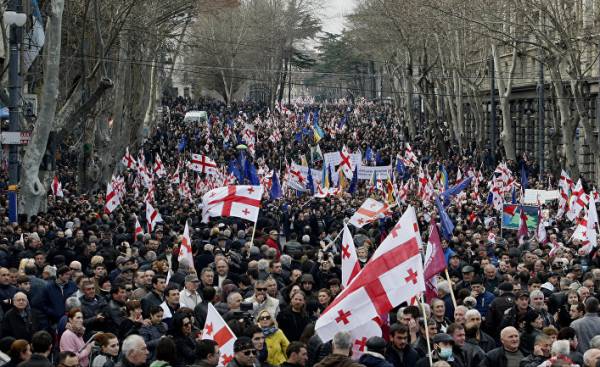 The structure of Georgian politics

It is considered that Georgian politician cannot be independent. I believe that because of conflict of interests of the powerful countries in Georgia there is only Pro-Western and Pro-Russian parties. Such an approach impoverishes the understanding of the political reality in Georgia. The structure of Georgian politics is very versatile. The diversity depends on the promiscuity of the population.

Georgia had a strong ethnic Diaspora, such as Armenian, Azerbaijani, Ukrainian, Turkish, Iranian, Arabic, Greek, Ossetian, Chechen, Dagestani, kurdo-jesisca, Gypsy and some others.

The Georgian population is just over 50% of the total. Should say that the number of people wearing Georgian surnames, only part is of Georgians origin.

The practice of assigning Ossetians, Circassians, Iranians, Turkomans, Kurds, Armenians, Azeris, etc. of the Georgian surnames are known from the 18th century, when the place eternally at war in Afghanistan, the middle East, North Africa and other places Georgians, Georgian nobles were occupied by representatives of neighbouring countries. Subsequently, these farmers took the names of their feudal Lord, and assimilated.

In the history of Georgian-Russian relations there is a curious case. After the adjustment of the rights of Georgian and Russian nobility in the Russian Empire was the devaluation of titles of nobility. The nobility of the Georgian principalities were more than the nobles throughout the Empire.

Apparently many forged documents of origin.

The second wave of “assimilation” of the population occurred in the period of Sovietization of Georgia. According to some, to stop the process of change of surnames into Georgian in a certain period began to apply administrative resource.

The third wave of “assimilation” was at the dawn of the ‘ 90s. Then it was necessary to demonstrate the loyalty of the ethnically non-Georgian population towards politics of Georgia’s independence. This loyalty ensured they benefit from the results of privatization.

It should be recalled that the so-called “Russian speaking population”, in particular the Abkhaz Circassians and the Kartli Ossetians, did not support independence and democratization of Georgia. It still wanted to live under the Soviet regime. As a result, Georgia plunged into internecine wars and the civil war.

The Georgian state continues to develop with such structure of political elites and with the composition of the population, which over the years of “assimilation” has become more and better to speak Georgian.

Occurred in the early 2000s, revolutionary changes has brought together political mosaic of the Georgian society. Under the symbol of the “red rose” has successfully begun the process of Europeanization of Georgia.

It should be noted that the degree of influence on the political process from a particular strata depends on the availability of resources. Western strata of influence has virtually unlimited resources.

Russian strata, with economic and social mechanisms, prefers to use a military-political levers. The Pro-Russian elements of the Georgian political mosaic there are “clever” strategy of direct or indirect manipulation and modeling of the situation. The Armenian lobby, according to the behavior of Georgian political elite that skillfully uses the Russian factor in the Caucasus to influence Georgian politics.

Close relations and economic-strategic Georgia’s dependence on Azerbaijan and Turkey enables the latter to increase the intensity of the impact on Georgian domestic politics.

Other players, such as Iran, China, Arab countries also have levers of influence on the situation in Georgia.

Political reality for the country is becoming diverse enough to be a source of interesting historical series.

Georgia, as in the previous century, plays the role of an oasis of calm and convenience of transit, which benefits both the Western and Eastern States.
The only force which is not beneficial to stability in the Caucasus is the Northern neighbor.

Apparently it is not beneficial to stability anywhere in the world, and he all ways interfere in the internal Affairs of States in order to destabilize. The result that gets more and more sanctions.

The struggle of “red” and “blue rose”

The intervention of this force in the internal Affairs of Georgia led the movement of “red rose” to defeat. Reigned the coalition “Georgian dream”, consisting mainly of marginalized groups and unpopular politicians, was gradually supplemented by “policy-defectors” and nurtured in the camp of the “red rose” activists.

During the reign of this coalition gradually arose the movement of the “blue roses”. Both movements support the Pro-Western path of development. Both movements hold the same type of Georgian policy, “fraud”, designed for their sponsors.

In fact, there was a notorious crystallization of elites. “Blue” and “red rose” tilting at windmills, using the “comic shelves” to maintain the illusion of their importance in international politics. They are also fighting among themselves for the external sources of their welfare.

Connection with are interested in “Georgian project” actors in international relations, help the representatives of these political camps to control a poor domestic market and a few sectors of the economy, and most importantly to obtain direct financial assistance in the form of grants and direct investment. However, one should not forget about the other segments of the political mosaic of Georgian politics.

It is interesting to observe, as supported by external political forces, these segments are waging a struggle against each other in the political economy of space of the Georgian state.

You can find a lot of examples of how these segments “podsizhivayut” each other using the Georgian political elite. For example, a strange attitude to the Arab investors in Georgia, periodic displacement of the Kazakh, Azerbaijani, Turkish economic entities of Georgia.

Of special note is the incident with the Azerbaijani human rights activist and opposition leader, who after leaving his home in Tbilisi, suddenly found itself on the territory of the state being in which he would last.

All of this suggests a serious crisis of independence in Georgia. After the fall of the “red rose”, the government in Georgia has no control over the activities of all strata of the Georgian “patchwork”, and is forced to rush from meeting the demands of some political customers to the satisfaction of the other.

The oligarchs and Georgia

The weakness of the Georgian state is evident in how easy the Georgian oligarchs to change its policies, the Constitution and the laws.

The weakening of the state and strengthening of local oligarchs, form a sieve for the foreign capital. Any Georgian oligarch can decide the fate of a foreign investor. On the other hand, any stratum can bribe that focus on personal well-being, a powerful “fat cats”. For this reason, in the Georgian state and politics occur amazing and mutually exclusive phenomena.

Unlike a strong state from a weak, controlled by oligarchs, public education can be seen on the example of gardening. The government, for beautification of the landscape, will require an expensive and unique green spaces abroad and most effectively to use them, so spending (including untargeted) were satisfied with the majority of the population.

The oligarchs will always be focused on achieving their personal goals focusing on more effect of the profit benefits, with minimal losses for themselves. Therefore, the oligarchs will carry green areas with a place that is closer and cheaper. They will always seek to change the laws to suit their own goals and objectives.

Weakness is confirmed by the increasing stock and the phenomena of unusual Georgian society. It is a strange March. For example, the invisible gay pride parade turned into the most interesting event celebrated in the Orthodox marched and celebrated festival of the clergy.

In fact, this information and religious manipulation for the unification of Orthodox peoples against the common enemy. Common enemy — in this case, the Western world.

However, the purpose of this manipulation not only to unite against a common enemy, but the absurdities of the reality of social life of Georgia. For the developed population of our global village who are interested in Georgia, the scale of such marches is seen as an act of contempt of homosexuals active against the passive.

In any case, the reaction to such provocation is a blow to the Georgian society.

Another example is the Georgian marsh. It is directed against foreigners who are legally present in the country. In Georgia, there is the problem of fascism, which is clearly represented in the occupied territories — Abkhazia and Tskhinvali regions. There are real modes that hate Georgians. Do locals have problems if they are caught doing kindness to the Georgians. Although marching at the weekend and doing different accents, proving a customized character and the artificiality of this action.

The Georgian state is at a dangerous level. For the past 5 years, has deepened the processes of marginalization of the population.

The contribution of foreigners to the strengthening of the Georgian state

The only circumstance which does not allow the Georgian state and the economy to collapse as swiftly as they soared, that the economic activity of foreigners.

Foreigners who are naturalized or not, are the most honest taxpayers and producers.

Foreign investors attract to Georgia specialists, who help to organize production and agriculture. The policy of openness and willingness to join the international activity has always been effective.

For example, the famous Irakli the Second moved to Georgia from Turkey fifteen hundred Greek metallurgists and miners and founded the first in the Caucasus foundry (cast in Georgia 35 guns guarded Tbilisi). Best of Georgia wine in the 19th century produced migrated from Swabia in Tbilisi by the Germans. Etc.

The weakness of the Georgian state is also manifested in relation to “creeping occupation”. Unfortunately, the population of Georgia is only in fact learns about the transfer of the barbed wire, the establishment of new pillars and illegal characters, or the kidnapping of local residents.

In the modern world of new technologies, Internet, online video monitoring for one or another problem area, it is surprising that, until now, has not been installed video surveillance system along the contact with the occupied territory. It is necessary to commit violations of territorial integrity, violent assaults and other facts of aggression, for further submission to the international court.

On the background of transformation of the explosive “red rose”, in an inert “blue rose,” began teaching “Worthy partner — 2017”, which will be held until August 12, demonstrate how effectively the international community supports the independence of Georgia. 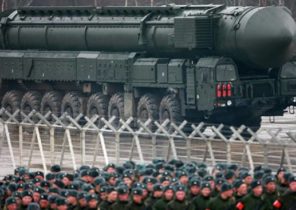