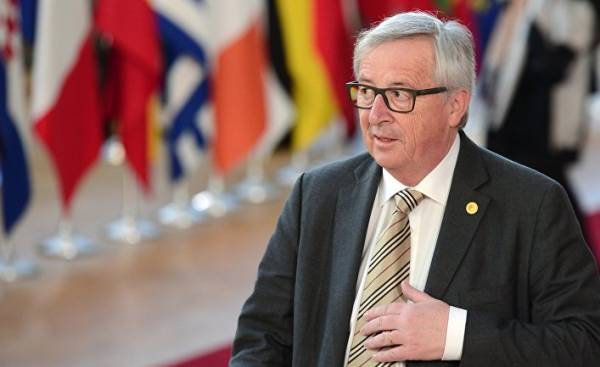 The economy in Europe is increasing, employment at a record high, and budgets sanitize. And yet Brussels increases the pressure on Germany to contribute more to the economic recovery of Europe. The European Commission urges the German government to use “fiscal capacity” to constantly push investment and domestic demand.

The Commission criticises Germany due to the large surplus in the balance of current payments. For several years Germany is accused of the macroeconomic imbalance due to large surpluses, which do not meet German or European interests.

Demands from France, the US and the IMF

In the past weeks, the criticism sounded much louder. The international monetary Fund have expressed recent concern from the United States came charges on exports from Germany. The new President of France Emmanuel Makron (Emmanuel Macron) during the election campaign called on Germany to ensure that it increased consumption and investment and thereby support the European economy.

The European Commission has long been suggested that States that can afford it, make efforts to support the economy. The increase in investment, they should stimulate the market conditions in Europe and thereby to provide weaker States greater scope to reform their economies and improvement budget.

France and Italy, according to European Commission, this support will be required. France, according to the EU Commission, again will not be able to fulfill the requirements of Brussels on the budget. New debt, according to this, in this year will amount to 3% of economic performance is prescribed to 2.8%. The Commission recalls that “France should be ready to take further measures.”

Merkel refers to the ECB

The French President Makron is recognized that should the rate of savings. However, it requires also from Berlin, support in the investment offensive. The foreign Minister of Germany Sigmar Gabriel (Sigmar Gabriel), the SPD, he found the most active supporter of these requirements. But German Chancellor Angela Merkel (Angela Merkel), the CDU, in the end also demonstrated the openness in the question of the German-French investment.

However, the German policy is partly helpless. So, theoretically, billions of euros coming from tax may be granted for investment in infrastructure. But planning takes too long, so you can quickly obtain the money. The EU Commission recognizes that the Berlin policy has already tried to facilitate the planning of public projects. However, it called for more effort to solve this problem.

Also, the policy of the European Central Bank in the field of interest rates and low commodity prices contribute to the fact that the surplus of German exports is increasing. “The Euro is too weak because of the policies of the ECB, so German goods relatively cheaper,” — said Merkel in a discussion with students in Berlin. The decisions of the issuing Bank policy has no effect.

The German government showed in the end, openness to discussion about the surplus in the balance sheet. The Minister of Economics of Germany cypris Brigitte (Brigitte Zypries), the SPD, said recently that seeks to reduce in two times the actual surplus to 4%. The government expects the surplus will shrink in 2018 due to domestic demand and higher oil prices from 8.3% to 7.3% per year.

This theme will play a role also during the election campaign in the upcoming elections to the Bundestag. Budget surpluses cause currently, politicians have a range of preferences. CSU has already said that will go to the polls demanding a “strong” tax cuts. The candidate of the SPD, Martin Schulz (Martin Schulz) is at the same time, the strengthening of investment in the free kindergartens, and in day schools.

European Commission it should please. It requires, in his report to increase investment in “all spheres of government”. Specifically, the Commission calls such areas as education, research and innovation. In addition, should also be addressed and bottlenecks in planning for investment in infrastructure. Needs to be increased efficiency and transparency to the investment of the tax system, openness is also required for the most protected professions and services.

The EU requires a reduction of the tax burden

In addition, the Commission regrets that low-income citizens of Germany compared to other countries-EU members have too little money left after all deductions. The Commission was in favour of reducing the tax and payment burden. The growth of real income would, moreover, eliminate the external inequality.

The question is, how successful are appeals to the European Commission. Last year it failed to force Germany, the Netherlands and Luxembourg to increase investment. The Commission presented to the EU Finance Ministers a document in which States that have the budget and political space, are encouraged to increase public spending. However, the document did not receive support in a range of countries-EU members. Member countries of the EU must also comment on the recommendations, taking into account the peculiarities of individual countries.

In General, the balance of previous recommendations emerges in the following way. Only 24% of the recommendations were made “significantly” or “in full”, said the Commission. “No” progress or “limited” progress was achieved in 33% of cases. In 43% of cases were noted “some” progress.

In General, the officials positively assess the situation in Europe. “Economic growth in the EU continues and will continue also in 2018 — that is the sixth consecutive year,” said EU Finance Commissioner Pierre Moscovici (Pierre Moscovici) at the presentation of the recommendations of the Commission.