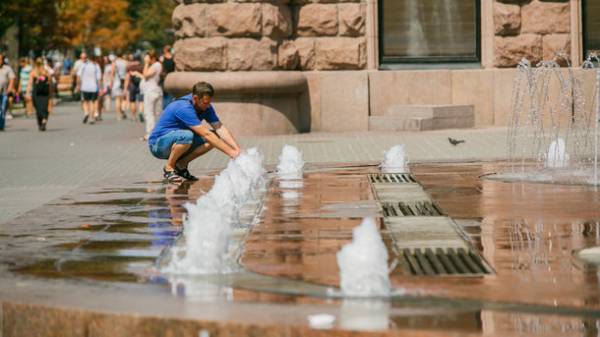 This weekend in Ukraine is expected to warm and rainy weather. Forecasters predict the storm rainfall. The thermometer drops below 30 degrees Celsius the seventh of August, and the final cold snap is expected only on August 10. The website “Today” found out what weather to expect the Ukrainians in the near future.

Fifth of August Ukraine will overtake the storm cyclone. So, thunderstorms this afternoon will be in the Lviv, Ivano-Frankivsk, Ternopil, Khmelnytskyi, Zhytomyr and Kyiv regions. The rest of the – partly cloudy. The thermometer in the Transcarpathian region will fluctuate in the range of 35-37 degrees above zero. On the West and North, and from 30 to 32 degrees. Hot weather expected in the South, the West and centre, where the air will be warmed up to 35-37 degrees above zero. 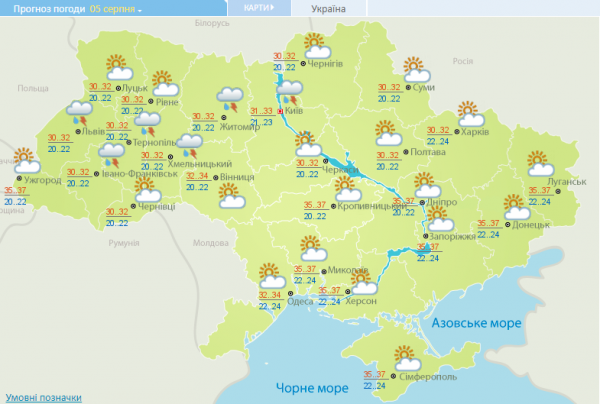 Sunday storm cyclone will also apply to the territory of the West, South and center of Ukraine. While the temperature this day virtually unchanged. In the West 30-32 degrees, in the Transcarpathian region – to 37 degrees in the centre, East and North – from 30 to 32, and in southern areas – from 35 to 37 degrees above zero. 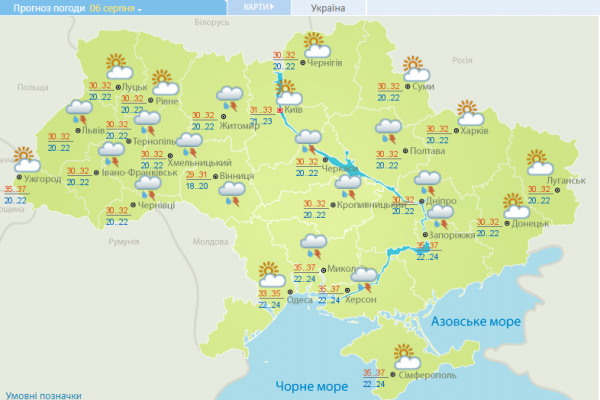 The seventh of Augustand the rains with thunderstorms will on the whole territory of Ukraine, except for Kherson, Zaporozhye, Donetsk and Lugansk regions. This day expected a slight cold. So, on the West and North, the thermometer during the day will reach elevations in 25-27 degrees. At the same time in the southern regions of Ukraine in the afternoon the air warms up to 36-38 degrees above zero, the same weather is expected in the West. In the Central regions the temperature the seventh of August will fluctuate in the range of 30-32 degrees. 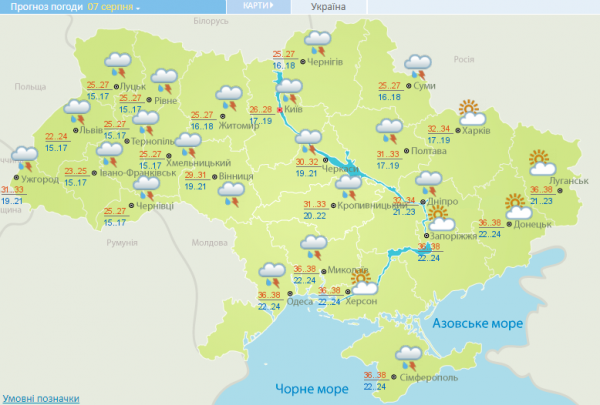 The same weather is expected on Tuesday, the eighth of August. In Kherson, Zaporozhye, Donetsk and Lugansk regions is expected to partly cloudy, and the rest of the – thunderstorms. In the South, the air warms to 36 degrees, in the center the temperature will fluctuate around 27-29 degrees. Relatively cool weather in the North and West. Here the air warms up to 25-27 degrees. Just hotter in the day in the East. So, in the Luhansk region, forecasters predict day to 38 degrees above zero. 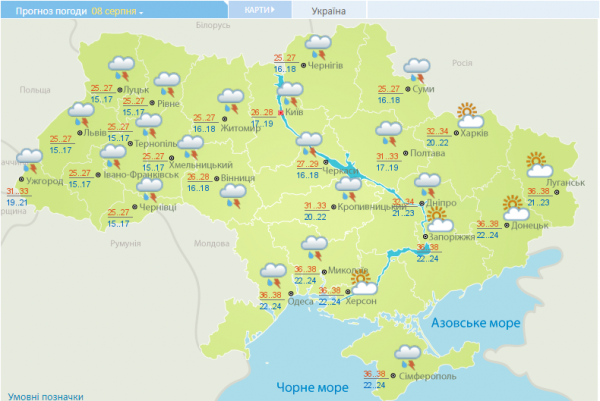 We will remind, as earlier wrote the website, “Today,” Ukrgidromettsentr predicts for 10 August, the heat in Ukraine will fall. With such predictions also agrees forecaster Natalia Didenko, who on his page on the social network shared a meteorological map. The cold is expected on August 10 in all areas except the East – the heat will last at least until August 12.
National weather forecast

Fifth of August is revered the memory of the Pochayiv icon of the Mother of God and Martyr Trophimus, according to the portal “Weatherman”. The people Trofim called Bessonnica, since there is a time for hard work, harvest: “Good day master small”. In the fields at this time were finishing the cleaning. Our ancestors noticed that the August dew – good to excellent weather.

Sixth of August is revered the memory of the martyrs Nobleborn princes Boris and Gleb. In people, the day of Boris and Gleb called polycopy (storm burns stacks), so in the tried not to go for field work are not taken. Weather to find out our ancestors helped the flowers: if the flowers of the creeper tightly closed, soon to be rain. 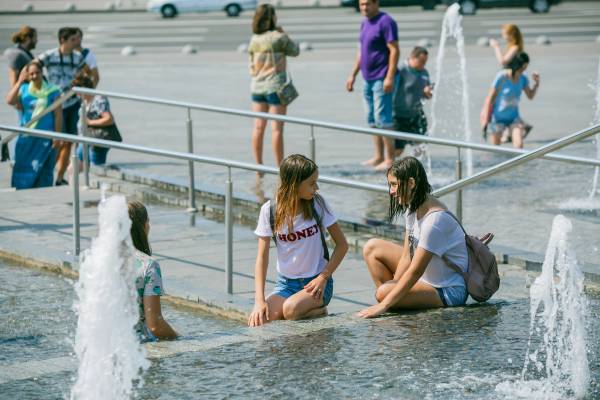 The eighth of August, the day of priest-Martyr Hermolaus, Hermippe and Ermocrate, priests Nicomedia. Our ancestors it was a time of gathering herbs for medicinal purposes. In the old days noticed the Golden color of the dawn and the violet color of the horizon – to good weather.

The ninth of August is revered the memory of the great Martyr and healer Panteleimon. In this day afraid of lightning: “Who’s in char (Panteleimon) works, the storm will burn the bread.” At this time begins in the early falling leaves of birch; go for herbs and roots. Our ancestors noticed if the birds stop singing, soon will be bad weather. 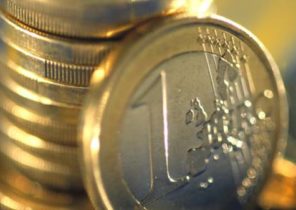