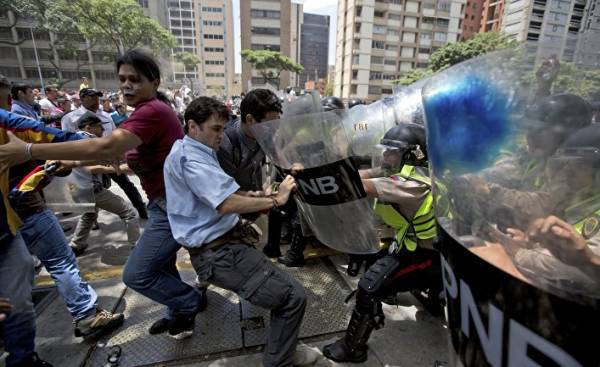 The Venezuelan regime has cast off the last rags to cover his nakedness, and showed the world his true self. I think only Evo Morales and the leadership of the leftist Spanish party Podemos (We can) desperately defending Nicolas Maduro. There is no doubt that misfortune struck on the shoulders of the Venezuelan people, will pass, and the difficulties will recede.

The only question is, what loss will be caused to the country and how many more lives will carry civil confrontation in Venezuela?

For the past few months, especially after July 30, Venezuela is in chaos. However, the current regime is not particularly concerned. He tries at all costs to stay in power to preserve their privileges and monopolistic control over public institutions.

Venezuela has become a failed state where the government cannot run the country, to resist violence, to provide basic services to the population. The country is in a world of isolation. These reasons prompted the Venezuelan society to go the way of the open popular uprising. Marx in the “Communist Manifesto” is very accurately described the situation — “the proletarians have nothing to lose but their chains.”

Venezuelan authorities are trying to suppress popular uprising by means of terror. In the course of going any means — the killing of opposition leaders, torture, imprisonment. Law enforcement agencies on behalf of the state do iniquity: kill, steal and rape people. To disperse the demonstrators used weapons and tear gas. The current government is doing is against what fought Chavez. Chávez’s ideas to build a Paradise on earth turned out to be unfulfilled dreams.

Those who now support a dictatorial regime needs to reflect on how far are willing to go the authorities for the sake of power. Human rights violations and the crimes committed in Venezuela are under the scrutiny of the civilized world. We live in a time when all the events are recorded and reflected in the documents. We must remember that those who committed crimes against humanity and have violated human rights will be held personally responsible. Should think twice before commit a new crime.

The results of the elections to the Constitutional Assembly of Venezuela has revealed gross violations of the electoral legislation. God forbid that the authorities finally understand what the population really supports them. Even civil servants at risk of being fired refused to participate in elections. Savistky regime has come to the point that threatened their own people with death if he did not vote for him.

A sad end for those who have had a lot of illusions about the current government.

Opposition leaders Antonio ledezma and Leopoldo Lopez re-sent to prison under the pretext of non-compliance with the conditions of stay under house arrest. The decision of the Venezuelan authorities to re-send them to prison shows the world that the purpose of the regime is to destroy the opposition and any form of dissent. To accomplish this task is quite difficult, given that 80% of the population have a negative attitude towards the ruling regime.

The introduction of economic sanctions against Venezuela — foolish, as they can worsen the already difficult economic situation of Venezuelans. However, this does not preclude the imposition of targeted sanctions against Maduro and his entourage. Furthermore, we demand urgently to impose political sanctions against the ruling oligarchs, which led the country to economic and social collapse.

The hour had come when the civilized world should act to prevent humanitarian tragedy. It is necessary to help the Venezuelan people in this difficult time.