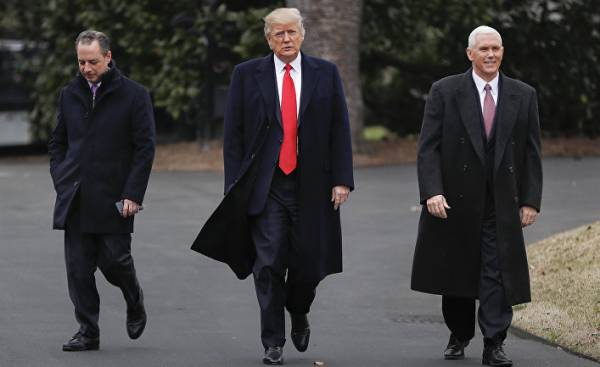 Amid the chaos and cacophony of endless Washington debate about policy toward Russia stands out the consistent position of Vice-President Mike Pence (Mike Pence). During his Eastern European tour, he praised the old allies and confirmed the willingness of America to defend democratic countries from those who attempt to destabilize. It is a pity that his boss in the White house seems to disagree with him.

On Tuesday, Mr. Pence praised the progress being made in democracy in Georgia after the collapse of the Soviet Union, and noted that the Russian tanks are still in South Ossetia — nine years after the Russian invasion. “We, we’re on your side,” he added.

The day before in Tallinn, he said the leaders of Estonia, Lithuania and Latvia, three NATO countries — the United States “strictly adhere” under the 5th article of the North Atlantic Alliance commitment to collective defense and “reject any attempt to use force, threats, intimidation, or harmful influence in the Baltic States or against any member of our Alliance.”

Mr. Pence was frankly given to understand why he believes that unity in the ranks of NATO “is now more important than ever” as long as a quarter century ago, communism fell. “No the threat is not felt now in the Baltic countries is stronger than the feeling of aggression emanating from your unpredictable Eastern neighbor,” he stressed, accusing Russia that it continues to “force to redraw international boundaries, to undermine democracy in a sovereign country and to set free Nations of Europe against each other.”

The direct approach of the Vice-President to the problem and its firm commitment to the Alliance quite reflect the traditional American view of Russia. Due to the increasing Russian aggression and the worsening tensions between Moscow and Washington with his tour, as the early visits of the Secretary of state and Minister of defence of the Ukraine and in other European countries, is an important signal to allies and partners, living in the shadow of Russia.

The majority of representatives of law enforcement agencies in the administration, like Mr. Pence, consider Russia as the main enemy. Especially they are worried about Russian plans to send to the end of the summer to the Eastern border of NATO territory to 100 000 soldiers. This is one of the most ambitious measures in the framework of the initiated by President Vladimir Putin to strengthen the armed forces.

Mr. Pence has repeatedly stated that he speaks not only on his own behalf, but on behalf of the President of the trump. It is not known how his words correspond to reality. Mr. trump continues to refute the assurances of its Vice-President — both in word and deed. His inconsistent policy can not be perceived by Mr. Putin and allies of the United States as a sign of weakness or insecurity, which, of course, is not in the interests of America.

Recently, Mr. trump, while in Poland, confirmed the loyalty contained in the 5th article of the NATO Treaty obligations. But can he be trusted, given that he said it very reluctantly, under pressure — and that he has repeatedly and publicly insulting spoke about NATO?

Mr. Pence informed the Georgians that the United States does not deny 2008 NATO statements, according to which Georgia ever should become a member of the Alliance. However, the question is whether Washington is ready to keep his word and whether they want Mr. trump to risk further worsen their relations with Mr. Putin, fulfilling that promise.

Suspicion about the views of Mr. trump on Russia arose due to his admiring comments about Mr. Putin and deepened when American intelligence agencies have discovered that Moscow is “hacked” the election campaign of 2016. By the way, Mr. trump has not yet responded to the statements made in the Friday statement by Mr. Putin that the United States should reduce its Embassy and consular staff in 755 persons (up to 455 people), as well as the confiscation of the two facilities of the American diplomatic property.

The unwillingness of our glavaticevo to condemn in this regard, Mr. Putin is quite obvious issues — like the fact that he delayed the signing adopted by Congress last week of a law that introduces against Russia hard, but necessary sanctions for its intervention in the elections. The prospect of these sanctions was the prerequisite for the promised Mr. Putin, the expulsion of diplomats.

Mr. trump came to power, wanted to establish relations with Russia. It’s a reasonable goal, because it was an extremely important country. Although the intervention of Mr. Putin in the American elections — and a number of other destabilizing actions, including the annexation of Crimea — have narrowed the space for cooperation in the interest of both parties to try to do it.

However, America has a real chance to deal with this difficult and complex issue, Mr. trump needs to demonstrate strong, consistent and convincing attitude, able to understand Mr. Putin, allies and the American people: the President knows what he’s doing, and his team supports him.