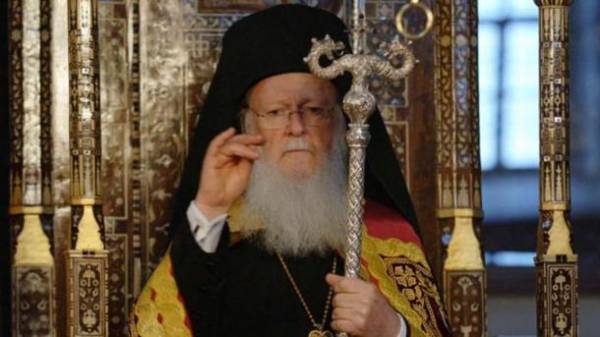 Ecumenical Patriarch Bartholomew congratulated Orthodox Christians, including Ukrainians, on the occasion of Christ’s Resurrection. Easter greetings the Ukrainian language posted on the website of the Patriarchate, reports UNN.

“This is a message of the victory of life over death, the victory of the light over the quiet Easter lamps over darkness instabilities and the resolution of troubles and problems due to nevecerela Light of the Resurrection, preaches the Ecumenical Patriarchate around the world and invites all people to bring to life. Encourages them to stand up with faith and hope before the risen Christ, before the mystery of life; calls them to trust someone who has the wheel of all creation — the Risen Lord, the Lord of joy and fun. Christ is risen, brothers and sisters! This grace and infinite mercy of our Lord, has a life and rules over death, let it be with you all”, — stated in the text of the message.

Patriarch Bartholomew recalled that “we live, however, in a world in which through means of communication continuously transmit unpleasant information about terrorist attacks, wars, destruction, natural phenomena, problems through religious fanaticism, about hunger, about the problems of refugees, incurable diseases, poverty, psychological depression, insecurity and other associated undesirable situation”.

However, in a congratulation it is noted that in the presence of this daily cross, which the people are from the “lamentations” comes our Mother, the Holy Orthodox Church, that we may advise that we need to be joyful, because our head, Christ is Victor, the bearer of joy that shines through everything.

As reported, Groysman thanked the Ecumenical Patriarch for support of unity in Ukrainian Orthodoxy.