Ukroboronprom” presented an unmanned version of the mini-APC “Phantom-2”. This is the third model of combat robot “the Phantom”, which this time armed with unguided rockets. The emergence of new versions of the Phantom suggests that Ukraine is obsessed with the robotic army, but experts warn of obstacles along the way. One of them is the lack of circuitry, which does not allow to create effective system of control drone.

Demonstration of a “Phantom 2” was held on July 25 Goncharovskiy landfill in Chernihiv region. The machine was armed with a module to run 80-mm unguided missiles RS-80. The demonstration didn’t escape the attention of even the President of Petro Poroshenko, noting that the use of unguided rockets allows a small car to create the “effect “Castle” on the battlefield. “The Ukrainian army is getting stronger every day,” he said.

Last year it already the third variant of land the drone, created by Ukrainian designers (one of the developers of the complex stated capital enterprise “Artem”). First combat robot “the Phantom” was presented at the end of August last year. Outwardly, it really was like a mini six-wheeled armoured personnel carrier with a length of 3 meters, width of 1.5 and a height of 90 cm That the robot was able to accelerate to 38 km/h and had a range of up to 20 km. He was armed with a 7.62 mm machine gun and was considered not only as military but also as a reconnaissance vehicle and as a tow truck for two wounded. The evacuation process was presented to journalists that the wounded could be placed lying down with the right and left side, tentatively pushing two special frames.

The second option, “Phantom”, but with anti-tank missile system “Barrier”, was presented in February 2017 at the international exhibition of arms and military equipment IDEX-2017 in Abu Dhabi (UAE). The machine gets the opportunity to hit heavily armored targets at a distance up to 5 km, aroused great interest among the participants and even took second place in the list of most interesting products.

“Authoritative research publication DefenceBlog called domestic drone mini-armored troop-carrier the most interesting modern fighting machine. Ukrainian — the best!” summed up then, the results of the exhibition the President of Petro Poroshenko. Then “Phantom” with ATGM “Barrier” went up another major exhibition IDEF-2017, which was held in Istanbul in mid-may.

However, the model “Phantom 2” differs from its predecessors. In order to place the module to run Nursi, designers had to make vosmitonny platform. Mini APC was equipped with a module for targeting. According to test results it was stated that the missile hit all intended targets. THERE IS NO ELEMENT BASE

Despite the large interest that the Ukrainian military robot, the experts still caution against excessive optimism. Attending Goncharovskiy landfill Director, information and consulting company DefenseExpress Sergey Zgurets said that the demonstration robot had a “more propaganda than practical combat value”: “what, in fact, do this.” According to experts, in the future, the machine will not be used with the unit to launch unguided missiles. “Actually tested the 8×8 platform with a heavy load. The use of such tools as C-8, on these platforms may not be entirely optimal due to the limitations in the maneuver,” Zgurets.

The limitations of the maneuver stems from the fact that control of the robot was carried out according to the cable, according to Zgurets was caused by analogy with filled with explosives tankettes that were used during the Second world war, the Soviet and German military. These wedgies were filled with explosives and using the wired control was directed at the enemy tanks caught in the line of sight. “It “wonder weapons,” proved to be not very effective, and the Germans had to abandon it,” — said Zgurets.

“And the problem of remote control by radio lies in two points: protection of the channel and the distance at which the car can control the operator. In urban environments this is the maximum a quarter of a mile, which, of course, very little. Similar problems are faced by the developers and their foreign counterparts. The more valuable will be if the solution will find our engineers. But I don’t see that this can happen in the short term — one to two years. So, about mass production so far,” — said the expert.

According to Serhiy Zgurets, in the creation of the fighting robots of Ukrainian designers will find a large amount of work: “we should Not forget that we do not yet have the circuitry, programmers, skills, and people who systematically and for a long time would work on the same problem.”

However, both experts are satisfied with the fact that work on the ground does not stop the drones. “Drones, aerial, terrestrial, underwater is a world trend. A technique that avoids loss of human life, will be in demand. When “Phantom” has just introduced, I noted in the comments, installing modules with guided missiles will make this mini-APC much more interesting. While we saw the start of the 80-mm unguided missiles, I saw the module for identification purposes, which is not bad. I would like to see the project developed. And today I was thinking about the training of operators for such equipment. After all, we are already faced with the shortage of professional UAV operators, for which the armed forces had not specifically prepared”, — said Maxim Glushchenko. 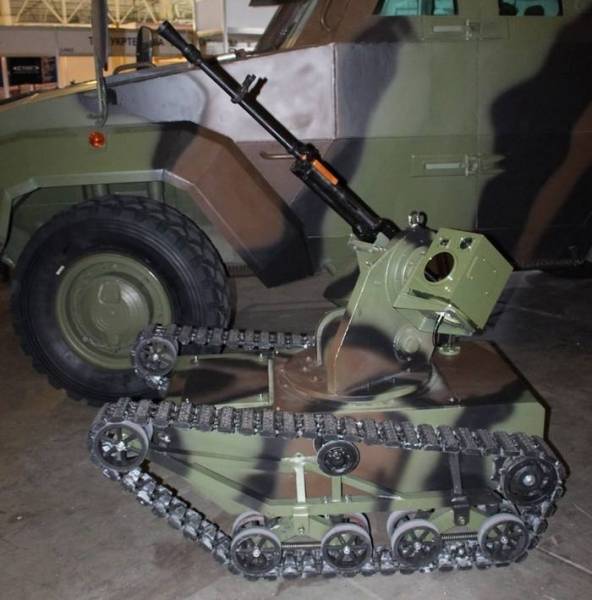 “Piranha”. Work on it is stopped

On one “Phantom” our experts don’t stop. In October last year at the exhibition “Arms and security”, the representatives of the plant “Lenin’s smithy” presented its version of a ground-based drone called “piranha”. Unlike “Phantom”, “piranha” was located on the tracked chassis. The exhibition presents a model equipped with a 12.7 mm machine gun, but the developers said about the possibility to construct a “Piranha”, equipped with the combat module, which consists of a 7.62-mm machine gun and the domestic 40-mm grenade launcher UAG-40. However, according to Zgurets, “Piranha”, gradually disappeared.

At the same time, as the expert, the defense Ministry and the General staff of the armed forces has acknowledged that Ukraine needs a ground robotic systems. Developed a separate approach to the use of ground robotic systems for the APU. This concept was approved by order of the chief of staff and 2030.