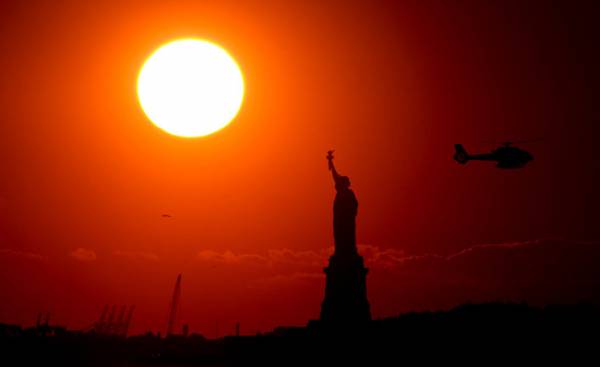 We live in an era reminiscent of the 1930s when authoritarian leaders was on the rise, democratic leaders are unable to resist them, the international system was shaken and the world is embroiled in war. Or are we experiencing something more like in the late 1970’s, when America, after recovering from a long involvement in a losing war and getting out of a prolonged recession, began to adjust the exchange rate, which allowed it to reaffirm its international dominance? People naturally try to understand unfamiliar and complex situations by comparing them to what it was before. So, starting with the election of Donald trump, the Americans were looking for an appropriate historical analogy to understand what happens to world order.

However, the problem of historical analogues is that they confuse us, and open our eyes. Our current era is not exactly “similar” to everything that came before it. And so the preference of one analogy or comparison often makes us exaggerate the similarities between “yesterday” and “today”, ignoring the countless differences. Philosopher George Santayana once declared: “Those who cannot remember the past are condemned to repeat it.” But in fact, those who rely too much on specific historical precedent, likely to misunderstand the present.

Historian Ernest may and political scientist Richard Neustadt, both special advisers who worked for multiple administrations, offered the best option. In his classics the book “Thinking in time”, they explained that the only way to make the analogy useful — and not dangerous — was to oppose it with another. This approach, in their opinion, would encourage decision-makers to a more complete understanding of the present.

Therefore, we should compare the present with the previous two epochs, which are often thought of analysts seeking to understand the era of trump and larger state of the world: the 1930s and the 1970s. Those who argue that we are in the 1930-ies, I think the international scene is reminiscent of the raging storm: the rise of authoritarianism, a threat to democracy, closeness to disaster. However, somewhat more optimistic analogy says that the current situation is more similar to the 1970-ies is another period when the US leadership and international order was severely tested. In this comparison the United States back in the heyday, with a half-hearted commitment to internationalism and serious geopolitical and geo-economic problems abroad.

So, what better analogy? Comparison of the two periods as their similarities and differences, suggests that America — and the world — closer to 1970-m to years than 1930. the international order not collapsing; to be optimistic more reasons than for despair. But the analogy with the era of the 1930s also gives a critical understanding of what is happening. If the United States and other defenders of the international order will lose the strength of will to take decisive action in support of global agreements, as it was in 1930-ies, the disaster would not be far off.

In the Preface of his six-volume history of the Second world war, Winston Churchill wrote: “My goal as a person who lived and worked in these days — to show how easy it was to prevent the tragedy of the Second world war, and as the malice of the wicked was reinforced by the weakness of the virtuous”. This goal pervades the first volume of these memoirs, “a Brewing storm” in which he Chronicles merzlotnykh years with a premonition of the coming disaster. Today, many aspects of this story seem strangely familiar.

In the United States the Great depression caused economic uncertainty and has left a deep trace in the soul of many Americans, contributing to the growth of protectionism and populism. Disappointment in the actions of the US abroad has grown, given that American involvement in the First world war created the world that would fulfill the expectations that accompanied this “crusade”. There was an understanding that the conspiracy of the elite — the “globalists” of the present day — deliberately dragged the country into the conflict to promote their own economic interests. Isolationist attitudes are sometimes reinforced nativists or even anti-Semitic views.

It’s hard not to hear these echoes of the 1930s in today’s events. In many countries democracy again gives way to an aggressive authoritarian regimes. A key democratic state demoralized and internally divided. A bloody civil war, this time in Syria, again became an arena for rivalry; doubts as to the commitment of America to maintain stability of the global system revived again. The analogy with the 1930 mi, undoubtedly, reflects widespread concern regarding the international order and the destabilizing uncertainty created by the apparent us rejection of internationalism. No matter how bold it may be a comparison of the 1930-ies continues to serve as a warning about how quickly things can spiral out of control — and what happens when defenders of international peace and stability back from his task.

However, between then and now there are significant differences. In the 1930s the idea of democratic governance was under a deadly threat. And even if today we are witnessing a democratic recession in the world more than 110 political democracies, and Western democracies still maintain a dominant position over any authoritarian enemy. In the 1930-ies, there was no strong coalitions to deter Nazi Germany, Stalinist Russia and Imperial Japan. The current coalition in Europe and in the Asia-Pacific region, established to prevent acts of aggression already exist. Yes, not one of the five alliances failed to prevent the territorial claims of Russia in Ukraine or China in the South China sea, but the main geopolitical mechanisms exist, has been quite successful in the past and are in the process of recovery due to the pressure emanating from Beijing and Moscow.

How about a more optimistic analogy? Darkness can mean a storm is brewing, but it may presage a brighter future. The night before the presidential election in 1980, after a long period of national doubt and quests, Ronald Reagan stated that “the sleeping giant wakes up again, determined.” This vision was at odds with the prevailing despondency. “Many of us, he said, referring to the American people — unhappy with growing economic problems, the constant crisis atmosphere in our foreign policy, weakened the prestige worldwide, the weakness of our economy and national security, the lack of strong, direct leadership.”

In many ways, it was an accurate reflection of the national mood of the late 70’s. during that decade, the United States has faced many serious problems — serious economic competition from other major powers, the rise of the Soviet Union as a global competitor in military terms, stagnation.

In these circumstances, many observers were convinced that the American era is coming to an end. Enemies of the free world rejoiced. “Imperialism will not survive the crisis”, — said Leonid Brezhnev and the leaders of the Warsaw Pact, the company informed.

And yet, 70 years was not mourning the tocsin for the American government and the free world system established after the Second world war, but just a turning point that served as a prelude to the update. By the end of 70-ies of the world again turned his face to America’s democracy was strengthened, globalization was in full swing, the main competitor of America has gone on an irreversible decline. In ten years, the Cold war is over for good for America conditions, and democracy and markets has reached unprecedented success.

However, everything depends on the active participation of America to correct the course and the effective use of the forces shaping the international landscape today and in the future. Before America was able to play to your strengths — and weaknesses of his opponents and took advantage of opportunities. It remains to be seen whether the United States and their geopolitical partners to do it again.