If you open the Wikipedia article, “the Swedish operation in Afghanistan,” you see a photo of heavily armed Swedish soldier on an armored personnel carrier. Behind him the flag, which in this situation is more like the banner of a crusade.

The Swedish flag — a vivid example of home-blindness, when, in an emphasis do not see their own symbols. It is likely that many Afghans it is directly associated with Christianity, but rare Swede is aware of this religious connection.

The Swedish flag is the symbol of centuries of religious oppression. Saudi, of course, the scale — however, reasonable freedom, when society tolerates the minority and their views, we have reigned only in the last 70 years. Freedom of religion proclaimed in 1952.

Today, the most problematic issue is the relationship to slavery. Here Christianity have nothing to boast. In the dispute about slavery in North America, the Christians were on both sides of the conflict, but his supporters hammered into the heads of opponents far more biblical words.

Although in the Bible there was a place for the prohibition on eating seafood and dressed in fabrics from different threads, the prohibition of slavery there, oddly enough, no. A civil war over slavery in North America broke out more than 1,800 (!) years after Jesus. If you certainly need such a wide term, we won’t be able to find out, good or bad ideologies such as Nazism and communism!

If I, a secular Swede could choose, I would prefer that our beautiful country personified the cross, but something else.

There are arguments for inclusion: a majority of Swedes are no longer profess Christianity, many of you are not religious, and the other a different faith.

There are arguments historical Christianity — not the most positive historical legacy, because Christian clergy have eradicated the ancestral cult.

There are arguments symbolic: it is time for us to choose a more unifying symbol?

There are arguments political: now that we massively overestimate the symbols of the past, is it time to think about Swedish characters?

You can go on and on. But each argument is divided about the simple fact that to change the Swedish flag, few will agree. And someone will say that the appearance of the flag is not important at all (though for those who overthrow statues, the symbols, of course, have value). But it says something about our blindness. Our history is our present, and the symbols carved into the rock. Likely to live with a Swedish flag we have for a long time.

The author’s arguments — politically correct whining, and counterarguments sadly predictable. Of course, it is possible to defend the Swedish history and culture, not clinging to supporting characters. I consider myself a patriot, but will easily agree to change the national anthem, and flag (for example, on a blue with three yellow crowns). But of course, I understand that nothing will happen.

People are downright sick of the cross on our flag (are they vampires?!) why do not worry, for example, the hijab or the burka. It’s the same characters, but they somehow believe in simple garments.

The relationship of Christianity to slavery has already been consigned to history, it is long gone! But the fact that slavery still flourishes in the Muslim world, the author is ignorant somehow silent.

How far-fetched and ridiculous. The next step will be to take pictures of crosses from churches that did not burn your secular eyes. I suppose, it hurts. Well, the comparison with Saudi flag shows a shameful ignorance of the author. It is clear Hristofor!

As far as I know, the Swedish troops are there to help and support local people, not to oppress! Local do not care, it looks like the flag of those who help them! Here the US flag is not the cross, but he hates the entire middle East! This so-called researcher clearly suffers from the syndrome of political correctness, like most now.

Afghan warlords at the flags even sneeze. Their “business” harms the very presence of foreign troops. The article is a good example of ahistorical thinking.

Our flag hanging 500 years and sagged the same amount. Unnecessary and provocative article. There are hundreds of thousands of more important issues. And only people angry.

But I do not see anything problematic in the cross on the Swedish flag. Lindenfors only muddies the water. people do not care.

This is just a sign that Sweden belongs to the Judeo-Christian cultural circle, i.e. Western civilization. And it is an empirical fact. The fact that some prefer a Caliphate under Sharia or something else is there, nothing changes. 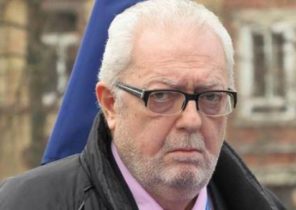