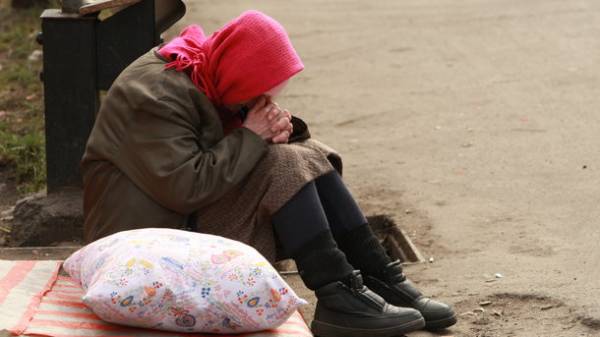 The Cabinet will count how many Ukrainians live below the poverty line. For this purpose the method of assessment of people’s expenses. All this is necessary for the implementation of the state strategy on poverty reduction, calculated until 2020. Experts say that the success of the authorities while can be attributed to increase in half of mentorplace, rising social standards and the planned modernization of pensions. But the disadvantages of high inflation.

APPROVED. As we explained in the press service of the Ministry of social policy, methodology of the Cabinet of Ministers takes into account the Ukrainian realities, and the calculations of the UN and the EU. This is important because the UN has calculated that according to their criteria, we have 67% of the population live below the poverty line because I can’t spend $5,05 per day per person as the countries of Eastern Europe. We are poor and so-called deprivation (non-monetary) criteria of the EU (see infographic), i.e. the inability to buy a car (only a quarter of households have them abroad — in 3-3,5 times more), to go on holiday abroad, to pay for komuslugi (more than one third of families receive subsidies), etc. 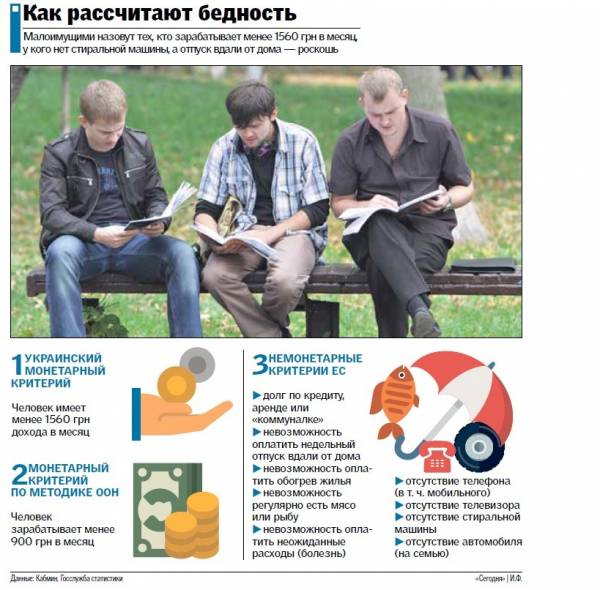 By EU standards, if applicable to humans, four of the nine deprivation criteria, it is considered poor. But according to estimates of the Cabinet, we have the poor in 2016 was only 23%. Because our criteria of poverty take into account such local factors as the real purchasing power of the dollar. For example, abroad a loaf of bread costs $1, we have — half the price of transportation is $2-3 and $0.1 and 0.2, respectively, and Therefore, the method of the Cabinet closer to our realities.

But according to the research of the Institute of demography and sociological research name of Tuhi, the poor we have still 60% because, in their method, this category included all people with less income than actual prozhminimuma. It differs from the official (for able-bodied — 1684 UAH, for pensioners — 1312 UAH) and is now equal to 2800 UAH. This is the amount for which the Ukrainians will be able to buy the minimum required goods and services for a month.

EXPERTS. According to demographers and economists, in fact, the statistics do not fully reflect the real picture due to the presence in Ukraine of a powerful shadow economy and of the firm “zarobitchanstvo”. So, the Director of the Institute of demography Ella Libanova acknowledges that the respondents by their personnel people who had incomes in the shadows, refused to answer questions about their income and expenses.

The President Ukranalittsentra Alexander Ohrimenko marks success in anti-poverty: it’s increasing twice mentorplace, regular increase of social standards. But the success of stopping high inflation — last year it was 14%. At the same time on the background of reducing the legal flow of workers — from $7 billion last year to $3.9 billion in 6 months this clearly increased the share of the shadow currency coming into the country. As evidenced by the strengthening of the hryvnia — a long time is the replenishment of the foreign exchange market. All this does not take into account far from us, the UN experts working with the official figures, and only partially trying to make power.

And the head of the Secretariat of the Council of entrepreneurs under the Cabinet of Ministers Andrei Zablovsky see the recipe of overcoming of poverty in the economy: “Strategy and methods of fighting poverty — the framework documents, they need to show the government understands: poverty is bad, and need something to do. The main recipe is the development and deregulating the economy. Then poverty will gradually disappear by itself”.

STRATEGY TO COMBAT POVERTY. Five-year strategy to combat poverty, adopted in March 2016, provides for the reduction of poverty level from 23% at the beginning of last year to 15% at the end of 2020. According to the Minister sotspolitiki Andrey Reva, the government is preparing a variety of mechanisms promises to help with employment of disabled people, people over 45 years of age, retraining them in new skills demanded by the market. Also the plan was to reduce taxes for people with low and middle income (10 thous) and raise them for high-paying, but it is not audible. Not heard yet about the development of rural areas. This is not just promised to repair the infrastructure and run the new buses for employees and students. In addition, the Cabinet wants to encourage farmers through incentives, to attract young arespecialized gave them the money to build housing.

“While little has been done, but there are still more than three years to overcome poverty, — said Okhrimenko. — Development of methodology for calculating the number of poor will help the Cabinet to lobby for BP necessary laws”.