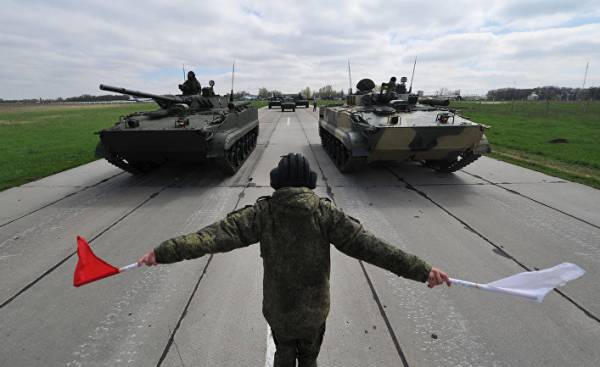 To oust Russia from the arms markets and take away her 2-3 billion dollar annual revenues from arms exports is an ambitious idea. This task is not only achievable, but also politically justified. How to implement it in practice?

The main suppliers of weapons in the world in 2016 were the United States, with a market volume of $ 27 billion, and the Russian Federation has sold weapons worth about $ 15 billion Markets of arms between them are divided on two main criteria: the sphere of influence and purchasing power of the importers of arms.

Spheres of influence — a political issue. And part of the struggle for markets in the US, many countries are inferior to the Russian product solely due to its low cost and the low purchasing capacity of the partner countries.

The situation with the markets for Russia is difficult. Cooperation with Western countries, which was minimal in 2014 completely stopped because of the sanctions. Traditionally, since Soviet times, buyers of Russian arms are the countries of Africa, the Middle East and Asia.

With the same production base and technology that Ukraine is the only obstacle to a complete monopoly of Russia in these regions.

Now the volume of military exports of Ukraine and Russia differ significantly. But we can compete in almost all fields, from tactical UAVs and software to anti-tank missiles, tank and transport aircraft.

So, for example, Rossiiskii T-90 (which mostly buy India and Azerbaijan) and a half-two times cheaper than the American main battle tank Abrams. Him can quite successfully compete to the Ukrainian Oplot.

Russian BMP-3 (the largest customers with contracts from 100 units — UAE, Kuwait, Algeria, Venezuela, and Azerbaijan) is worth about 2.7 million dollars. it may well supplant the local market is cheaper (the price of 2 million dollars) BMP TOUR — volunteer development of the new crawler infantry fighting vehicles, which outperforms the Soviet BMP-1 and BMP-2.

ATRA Stugna and the Corsair, produced in Ukraine, also cheaper than their counterparts and can promptly displace from the markets of Azerbaijan, Libya, Turkey, Peru, Russian Kornet anti-tank systems.

At the same time, in Ukraine there are a number of issues that need to be addressed for the successful implementation of this plan.

In connection with the systematic destruction of military capability and a prolonged stagnation in the development of new types of weapons, Ukraine lost a significant part of the technology. It’s mostly for electronics and precision weapons. But the engineering, shipbuilding and aerospace with the required funding to revive in the shortest possible time.

To help restore the productive capacities of Ukraine our Western partners — the United States and Europe. It is only necessary to change the policy of providing financial subsidies to Ukraine in the defense sector for mutually beneficial cooperation.

The main prospect of development of such bilateral cooperation should be the establishment of mutually beneficial cooperation. The relatively cheap Ukrainian engineering products can be upgraded American electronics, engines, guidance systems, communications and optics. As a result, we get a technique that is price and quality competitive products produced in the Russian Federation. In this case we are not talking about the delivery to Ukraine of the latest high-tech developments. To sustain a competitive price on the equipment must be supplied inexpensive components, not have much value in terms of technology.

If we combine the possibilities of our experience of the war against Russia, the potential of the sector and modern Western electronics, Russia will have serious competition in traditional markets.

Such cooperation in the next three years, according to the Association of manufacturers of arms and military equipment, can bring Ukraine up to 6 billion in additional revenue and allow you to put significant pressure on the market products produced in Russia.

Thus without the introduction of additional sanctions? Ukraine together with its partners, can strike at the most important high-tech industry of the Russian Federation, which brought her in 2016, nearly 5% of the total exports.

Another positive point to prevent outflow of Ukrainian developers and engineering personnel in Russia, where they are involved in the creation of weapons aimed against Ukraine and against the United States.

USA industries such cooperation would also be beneficial. The domestic markets will create hundreds of additional jobs and bring the country’s economy in the next 3-5 years about 3 billion due to the sale of spare parts in Ukraine.

The second result of the cooperation between Ukraine and the United States, may be the joint modernization of outdated Soviet equipment for the partner countries of NATO. Most of the research and engineering solutions for the production of this technique was created by Ukrainian designers, its unification with the equipment of the NATO countries that Ukrainian enterprises will significantly save the American budget. The total volume of this market, according to preliminary estimates, could reach $ 10 billion.