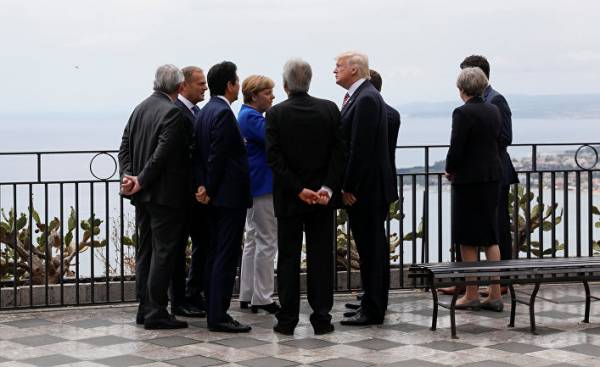 The summit of the heads of leading countries of the world has been held annually since 1975. Never was this to be cancelled at least one meeting. This year heads of the countries “Big seven” gathered at the Italian Taormina. There were many new faces: President trump, the President of France macron and Prime Minister of the United Kingdom may. Meanwhile, the impression that the time has come once again to wonder what exactly is the event.

During the cold war the first forum became a place of discussion, the developed countries of the West measures against the global economy, the pace of development slowed after the first oil crisis. After the end of the cold war, the group added Russia, and it became known as the G8, however, due to the annexation of Crimea in 2014, Russia was excluded from the club.

Once again the group became the G7, some have proposed to revise the value of the summit, developed countries that share such values as democracy and market economy. Nevertheless, this summit has any doubt that these values are common to the countries “the big seven”.

As a rule, the last statement of the heads of developed countries was included the phrase “to fight with any kind of conservatism.” This is an obvious phrase for the developed countries, which is the initiator of free trade, however, the administration of a trump, proclaiming the principle of “US above all”, expressed dissatisfaction with this proposal. Japan and Germany managed to convince the representatives of the countries to leave the phrase “fighting conservatism”, however, this event symbolizes the confusion in the G7.

Even under the Paris agreement, which represents the international framework for combating global warming and which promoted the ex-US President Barack Obama deepened the contradictions between the USA, which have announced their desire to remain in the agreement, and Japan and European countries. In the joint statement was included uncharacteristic phrase that the agreement will support the six countries except the United States.

Not only the United States is a destabilizing factor for cooperation between developed countries. Even in the European camp appeared thorn between Britain, which has decided to leave the EU, and Germany with France.

If there will be a growing tendency that all countries will think only about their own interests and bilateral, not multilateral cooperation, cooperation in the G7 will gradually weaken.

Previously on the “Big seven” accounted for 70% of world GDP, but with the rise of China, India and other rapidly growing countries now that share has dropped to 50%.

A period when free trade and measures against global warming depended on developed countries, came to an end. In order to carry out effective policy, the important role of G20, which includes China and India.

Despite all this, the “Big seven” until half of the world economy. If the members of the club will rally, they will pose a serious capacity. Now that is spreading anti-globalism and populism, we should return to the origins of the summit and to rebuild the collaboration.