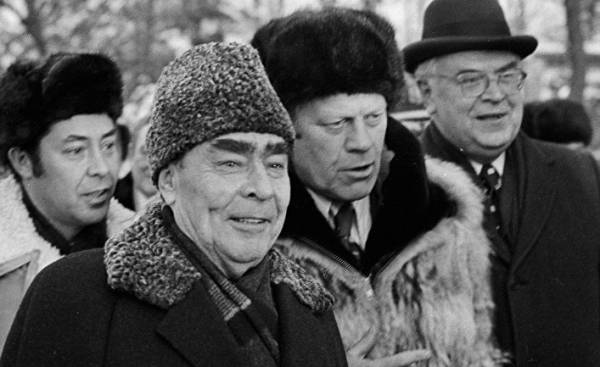 The secret support of Putin, Donald trump is not the first attempt by Russia to influence the American presidential election. 42 years ago, a Russian leader in private promised that his government will support a certain candidate in the presidential election: “from our side We will do everything to make it happen,” said Leonid Brezhnev in his conversation with Gerald Ford. I know whereof I speak, because they are the only living witness of those events.

In August 1975, President Gerald Ford went to Finland to participate in the largest gathering of world leaders, 35 heads of European States met in Helsinki to sign the Helsinki agreement at the summit of the Conference on security and cooperation in Europe. This agreement is the only written document on the settlement after the Second world war. Russia wanted the document was signed, because he seemed to be ratified the expanded boundaries. In response, the West has achieved prohibition of all other changes of borders by force (paradoxical, but Russia was the only country that violated the agreement when it annexed Crimea and annexed it from Ukraine in 2014). West also received a promise from Moscow to facilitate access to the country for the Western media and human rights against its own citizens, and these provisions became a sort of turning point to overcome Soviet oppression.

I was a member of a small political team of President Ford, who accompanied him in Helsinki. In this group I fulfilled the role of expert on arms control. Although the Helsinki conference has not played an important role in the question of arms control, we have planned two bilateral meetings with Russian leader Leonid Brezhnev to work on the Treaty on the limitation of strategic arms (salt-2). I participated in the first discussions between Ford and Brezhnev about salt-2 in Vladivostok for the nine months before the summit in Helsinki, and then headed in the U.S. government interagency preparations for the next stage of negotiations.

Our bilateral meeting was held in the Embassy of the United States. After the meeting, Ford and Brezhnev came together and headed for the front door, where they apparently exchanged jokes. All the other participants got in the car and headed to the Palace of congresses “Finland”, which hosted the summit.

The picture in the lobby of “Finland” was amazing. During breaks in the corridors it was possible to meet various leaders of the cold war and Western Europe. I particularly remember Tito with his badly dyed hair; Polish leader Edward Gierek (he looked quite grim); Romanian anti-Communist Nicolae Ceausescu (later he will be executed); the Swedish anti-American socialist leader Olof Palme (later he would be killed) and the French President Giscard d’estaing (elegant, as expected).

The relatively small size of this became a kind of symbol of the Palace of congresses and the need to place the 35 heads of state and their delegations are the reason that all the participants were placed very close to each other. Our delegation was the center of the main section and right in front of us, on the other side of the aisle, was occupied by the Soviet delegation. Each delegate had at its disposal a small table for records. All sat very tight, and we had to protect any sensitive information on our desks. Secretary of state Henry Kissinger gave rise to informational sensation when he weakened attention to security issues, and Italian photographer managed to shoot one of his secret documents.

I stared with Brezhnev and recorded with whom he spoke and what he was doing. At some point I noticed that he reached into his pocket and pulled out some pills. Our intelligence services suspected that Brezhnev serious heart problems — he really smoked a lot and looked weak. Thus, I recorded what he did with the packaging of these tablets he put it in the ashtray. If we can determine a cure for this package, we will probably get an opportunity to install and its disease.

Viktor sukhodrev, translator Brezhnev, surprised us when he appeared in the hall, went straight to Brezhnev. Sukhodrev as American officials and the Advice considered the best in the world translator Russian to English. He not only successfully cope with idiomatic expressions and understand their various “dialects” of English — American, British, Scottish, Australian, canadian, etc. he had an incredible memory — we were witnessing how he only made one record, when Brezhnev spoke without a break for 20 minutes and then introduced the great English version of the speeches of the Soviet leader. It could be translated “in two directions” (from Russian to English and English to Russian), and, it seemed, was able to do it without interruption. Suchodrev translated into all our bilateral negotiations in the Embassy.

Sukhodrev gave Brezhnev a single sheet of paper with printed text. I suggested that Brezhnev wanted to see a detailed record of the discussion of any question that was raised at our meeting at the Embassy. Brezhnev has carefully studied this document, hand sent Sukhodrev, and then did something amazing — he broke into small pieces the sheet of paper and put them in his ashtray, where already there was a package from his medication.

My curiosity knew no bounds. And when the meeting ended, I specifically did not hurry and was engaged in the analysis of papers on my small table, and at this time members of the Soviet delegation, one after another came out from the hall. The most direct way to the door passed right by the place where they were sitting, which gave me the opportunity to pour the contents of Brezhnev’s ashtray in my pocket. At the hotel I handed the package of medicines to the appropriate member of our team (it turned out that she had no information), and then found Peter Rodman (Peter Rodman), personal Secretary Kissinger and people from his inner circle. We both knew the Cyrillic alphabet and a little command of the Russian language, and therefore we ourselves glued portions of this document and made a draft translation.

This document was a detailed report about the short conversation between President Ford and Brezhnev held at the main entrance to the Embassy after our bilateral meeting. In it participated only sukhodrev, Brezhnev and Ford. Peter Rodman and I joined we made rough translations. We were amazed at what we read (followed by the official version of this conversation the American side):

Brezhnev: I would like to say to you in confidence and quite frankly that we in the Soviet leadership supported you as President and for another term. And from our side we will do everything to make it happen.

Ford: Thank you for that. I guess I’m elected, and I think it is in the interests of further development of Soviet-American relations and contributes to the strengthening of detente.

Brezhnev: Yes, in this respect, we agree with you, and that is as it should be. But, unfortunately, publicly you call us, the Soviet Union, the enemy, and in your conversations with us you say that we have common goals — transformation of discharge in an irreversible process.

Ford: I can assure you quite sincerely that I am ready to devote all my efforts to ensuring that relations between our countries develop steadily and to discharge irreversible.

Rodman and I discussed what we should do with this discovery. Just the two of us — plus sukhodrev, Brezhnev and Ford were aware of the content of the conversation. We decided that given the unusual manner in which the content of this conversation was in our hands, and its obviously a private and friendly character, we decided never to inform. So I put the only one reprinted copy of this document to your working file and forgot about it.

A few months later I left the national security Council and returned to private life. At that moment I tried to figure out what I should do with my office document folders. I was told that the right step — especially in light of the recently adopted Law on presidential documents (Presidential Papers Act), and the desire to ensure the safety of all relating to the Nixon materials will be submitted to the national archives for inclusion in the Library of Gerald Ford. I did just that.

But today we are faced with accusations of electoral team of the trump in collusion with Russia. It made me think about the conversation between Brezhnev and Ford, held 42 years ago. So I decided to find out if you can obtain a copy of this document. Much to my surprise, I found that the recorded conversation on the web Library Ford.

Brezhnev, Ford, Rodman and suhodrev has already died, and I was the only person who knows the contents of that conversation. If because of trump the issue of Russian interference in presidential elections did not come to the fore, I would never not thought about it. In this case, the document likely would have been buried among thousands of pages of diplomatic and presidential documents of the time.

Ford never told about this short conversation, which lasted less than two minutes. Perhaps he took the words of Brezhnev just as sloppy as a joke and wish him success in the upcoming elections.

However, Brezhnev, apparently, meant something more. Alexander Acalovschi (Alexander Akalovsky), who was then our interpreter in the state Department, included an important note in the collection of his papers on held in Helsinki the conference on security and cooperation in Europe. Acalovschi was not with Brezhnev and Ford in that moment, when they stood at the entrance to the Embassy. But when Brezhnev went to his car, Acalovschi heard his conversation with Suhodoeva. Brezhnev asked him about how could someone from a flock by a number of correspondents to hear the content of their conversation. Sukhodrev assured Brezhnev that during the transfer he deliberately lowered his voice so only the President himself could hear it.

This once again confirms that Brezhnev wanted his words were perceived as something more than just a joke. 42 years ago the Russian leader privately offered unlimited help to the candidate in presidents of the United States. Considering remaining for many years the invariable character of the Russian secret methods not cause a big surprise to see Russia in 2016, is doing what Brezhnev offered to Ford in 1975. The difference is that this time such a proposal was accepted, whereas in 1975 the United States was headed by a completely honest man who possessed great experience, and he ignored the offer.