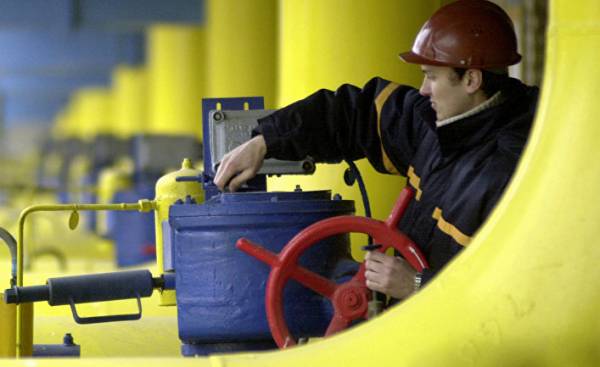 This result was somewhat unexpected because of recent problems at the mining companies is not diminished.

The question is: if the gas industry everything is so difficult, then why is gas production? Answer it difficult. To understand what is happening in the mining industry, it is necessary to analyze the situation on the adjacent markets. First and foremost, in the gas market, and also in the market of drilling and maintenance services. Gas market generates revenues, and hence investment, gas companies, and the market for drilling services defines the technical capabilities of the mining industry.

The domestic natural gas market over the last three years has changed more than in the previous 20 years:

— the average price of gas decreased from 400 to 200 dollars per thousand cubic meters;

the prices in the domestic market is bound to prices on European hubs or minimum import prices;

— taxation of the sector has changed, though a few times, but overall remained at the level of the early 2010-ies.

Despite the reduction in gas consumption and falling prices for Ukrainian mining companies, the situation is not so bad. The Ukrainian gas production is mainly supplied to industrial consumers in this segment, its share is about 1/3. Also this year, for the first time Ukrainian private mining company began supplying gas for technological needs of Ukrtransgaz, the Ukrainian company is only 10% of the supply of the necessary gas transmission company 3 billion cubic meters. That is the problem with the sale of gas on the domestic market there, you can only talk about some seasonal fluctuations. During the heating season, gas has always sold better.

As for the segment of industrial customers, then you can talk about the unconditional victory of the market. 40 thousand industrial consumers buy gas from 250 traders, of which nearly 50 — importers of gas and the same mining companies. The NJSC “Naftogaz of Ukraine” is rapidly losing market share. Today, more than a third of the volume of gas for industry is a private Ukrainian gas production.

Much worse is the situation with the introduction of market relations in the segment of gas supply to the population. Not much has changed, the scheme works the old fashioned way. The company sells all the gas to Naftogaz, the gas companies and distribution companies — to the public. There is practically no competition in the foreseeable future is not expected — the Cabinet limits the rates.

The only major change, a little pleased with citizens — increase in gas prices for the population in may 2016 to 6 879 thousand UAH per thousand cubic meters. Although the new prices and close to the market, but they are formed “orders” with the national regulator-NKREKP.

In parallel with the raising prices of gas for households was increased the purchase price for Ukrhazvydobuvannia 1 590 thousand to 4 thousand 849 hryvnias per thousand cubic meters (without VAT). That is, the company’s revenues from gas sales simultaneously grew by almost four times. The company first received sufficient funds to implement major projects.

As for the market of drilling services for oil and gas, there is also significant changes occurred.

Since last year the main driver of the market is the state of the company. The company conducted a number of large tenders, for example to conduct a hundred operations of hydraulic fracturing (HF) and drilling 90 new wells. However, the winners of the tenders were foreign companies. In the first case, won the Belarusian and Romanian companies. In the second, only one lot (six wells) of 15 (90 wells) received a Ukrainian company, the rest went to the poles, the Croats and the Chinese.

Ukrainians got less orders for wells repair and other service work.

In General, the Ukrainian service market was not ready to meet the rapidly increasing appetite of the subsidiary, and therefore capitalize on large orders state-owned companies, domestic service companies have not yet succeeded.

But the market is changing, almost all the leading Ukrainian drilling company last year purchased a new setup and are now able to successfully compete in the domestic market with leading foreign companies. Therefore, nine out of ten wells for private gas producing companies drilled the Ukrainian drillers.

It should be noted that the global market for drilling services in the past three years is undergoing a serious crisis associated with a fall in the price of oil and gas. Against this background, the rapid development of the Ukrainian market looks impressive, and many foreign companies are willing to try their luck in Ukraine.

The market of oil and gas production are very conservative and inert. But in spite of this, since 2014, the industry has experienced major changes. First of all, it concerns the public sector, presented by the company “Ukrgasdobycha”, which is more than 70% of the total gas production in the country. Conventionally this can be attributed to “Ukrnafta”, where the state, represented by NJSC “Naftogaz of Ukraine” is the largest shareholder — it owns 50%+1 share, although for many years the company was run by management controlled group “Privat”.

In the summer of 2015 in both companies, the new leadership, the Chairman of the Board of the subsidiary was appointed Oleg Prokhorenko, and Ukrnafta — mark Rollins. Then began a serious personnel cleanings. The subsidiary of the current 15 top-managers, only one worked in the company until 2015. Also changed the heads of branches, with the exception of two. Ukrnafta in key leadership positions was occupied by foreign specialists.

By the end of 2016, both companies managed to stabilize production. But to ensure the stable development of the companies was much more difficult.

The situation has improved markedly in the subsidiary, the company in the first half increased production of 170 million cubic meters (2%), to 7.48 billion.

Of course, not without a little luck. In March, was drilled and put into operation high-debit wells, the production of which amounted to 1 million cubic meters per day. This is the most productive well in the last ten years. Also one-third increase in the volume of drilling carried out at least 50 of fracturing operations conducted repairs of wells.

While the company “Ukrgasdobycha” can count on the intensification of production from existing fields, but it is now necessary to solve the issue of resource development — obtaining new license areas and finding new deposits, including on the Black sea shelf.

However, here the company has serious problems, because Poltava oblrada for over a year, refuses to negotiate special permit for ten sites of the subsidiary, four of land the company wants to obtain on the Black sea shelf, but Goshenite refuse to allocate them. Also continuing pressure from the Prosecutor General and the SBU. In early July, at the company’s headquarters were searched and on 18 July the company left the Director of procurement Andrew Turner. The subsidiary claim that by its actions, the security forces endanger the execution of plans for production.

Worse is the situation at Ukrnafta. The company continues to cut production, although in the beginning of the year was a significant positive trend towards stabilization of production with simple and inexpensive solutions. For the first time in ten years Ukrnafta was close to reverse the negative trend.

But in March, it became clear that the work of the company will not give. The first reason is “historical” arrears of taxes in the amount of UAH 12 billion, which arose a few years ago. The second conclusion in 2015, 18 billion in company controlled group “Privat”. After this he was appointed the new management of the company Ukrnafta has filed a lawsuit against the debtor, but to get the money back failed.

At the same time, the question remains 10 millardkuralt gas Ukrnafta raised in 2006-2011 “Naftogaz of Ukraine”, the last of the gas has not paid off.

Goshenite, citing debts of Ukrnafta, refused to renew the permits for extraction, expired. As a result, in the same year, Ukrnafta will lose 20% of the volume of oil and gas production, and in the next two years — almost all fields, and Ukraine will not receive 1.4 billion cubic meters of gas, equivalent to 7% of the national production.

Problem solving and Ukrnafta’s future lies exclusively in the political sphere, and the government will have to find a difficult decision to save the state and solve the problems of debt. The delay in decision-making on Ukrnafta costs every day more and more.

Stable situation is observed in the segment of private mining companies. In the first half of this year amounted to 140 million cubic meters (7%). Almost all large and medium-sized companies are drilling new wells, operations are performed on hydraulic fracturing and work using coiled tubing. We can say that private companies fully recovered from the severe 2014-2015, when it was introduced draconian rent for gas production. Growth of investments due to the favorable situation on the domestic gas market, as mentioned above.

A good indicator of improvement in the industry is to increase foreign companies that are once again beginning to show interest in Ukraine. In late June, two American Frontera Resources and Longfellow announced its plans to enter the Ukrainian market. To the first, however, there are a lot of questions. Now the Interdepartmental Commission shall consider the proposals of the Americans. In addition, the canadian company Arawak Energy has bought a stake in the project for gas production in Western Ukraine.

Assessing the scale of drilling and investment in production, you can expect that this year Ukraine will supply a new record in gas production. At the same time to talk about any breakthroughs are not necessary, but growth of 3-4% can be considered a good result.

Much will depend on the market situation, prices and demand for gas and the deregulation of the gas market. Until legislative changes are very slow, and their effect will be felt soon. One of the main “engines of progress” mining companies see the introduction of an incentive the rent rates for gas from new wells at 12% (bill No. 5459). Today the rent is 29% of gas produced from depths up to 5 thousand meters, and 14% — more than 5 thousand meters. According to the apologists of the bill, a 12 percent annuity will be a good incentive for producers to invest in drilling new wells. But have so far failed to convince the majority in the Verkhovna Rada, and the Ministry of Finance feared that the introduction of new rules could adversely affect the revenue side of the budget.

Remain unresolved the more mundane problems of mining companies. For example, the rate of rent for gas condensate is 45%. While rents on the gas produced from these wells is equal to only 29 and 14%. Moreover, the rents of oil is 29%, while oil and gas condensate is almost the same raw material composition and purpose. It is unclear why the rent for the condensate and a half times higher. It would be logical to bring the rent of gas, gas condensate and crude oil to a common denominator. But lawmakers this subject is not officially discussed.