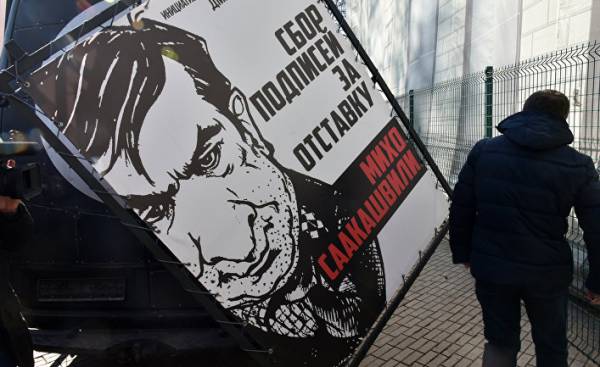 There was a time when, after his defeat in the presidential elections in Georgia and the forced departure from the country Mikhail Saakashvili was languishing from boredom in various cafes of Brooklyn in new York. “I was a normal guy,” he said to the New York Times with bitterness in his voice. It was in 2013, and about any return to Georgia could not be considered as the new government brought against him criminally for abuse of power.

Less than a year later, the revolution in Ukraine will allow the colorful leader to find a second youth. Actively supporting the revolution on the Maidan, Mikheil Saakashvili soon became a prominent figure in Ukrainian politics after the victory of the revolutionaries. A prominent representative of the young reformers, the former President of Georgia (2003-2013) gathered to show their talent in the South of Ukraine in Odessa region. Appointed by President Petro Poroshenko in may 2015 by the Governor, he had to make the city an example of modernity, transparency and to end corruption. At the same time, dozens of Georgian citizens came to Ukraine to share their knowledge and experience.

The experiment ended quickly: a year later, the Governor resigned and accused Petro Poroshenko in indulging in corruption. Now he becomes a member of the opposition at the head of a small reformist party, and calls for continued to fight against korruptsionerov.

This new life received an unexpected end on 26 July, and two-faced Saakashvili most likely will have to go to new York journey. That while in the trip to the United States, the former President learned from the statements of the Ukrainian migration service that President Poroshenko has deprived him of Ukrainian citizenship. Saakashvili received it in the time of his appointment by the Governor of Odessa, received a passport from the hands of his former fellow student at Kyiv University, Petro Poroshenko.

Saakashvili is blamed that upon receiving citizenship, he provided “false information or false documents”. No details were given, but the information that he is prosecuted in Tbilisi, it is not mentioned anywhere.

“Is his own person”

There is one problem: becoming a citizen of Ukraine, the new Governor was deprived of his Georgian citizenship. Saakashvili remained without any citizenship? The situation is not entirely clear, but the confusion can be resolved thanks to the Dutch nationality of his wife. However, according to Ukrainian Deputy Serhiy Leshchenko, an ally of Saakashvili, he has only one choice today — to seek asylum in the United States. “If he tries to go back to Ukraine, you will be arrested and extradited to Georgia,” — said Leshchenko.

He believes, as almost all browsers, and Saakashvili himself that the political motivation of this completely unexpected decision no doubt. This was hinted and Anton Gerashchenko, adviser to the Minister of internal Affairs of Ukraine, which on Wednesday wrote on Facebook: “I think that Michael never appreciated the Ukrainian citizenship. He used the Ukraine mostly for their own image in hopes to return to Georgia”.

Petro Poroshenko still has not made any comments, but a likely candidate for re-election in 2019, the President seems determined to create a vacuum around itself, and to eliminate any competitor, who could outshine. Sometime in 2015, Saakashvili for the post of Prime Minister, but he became the leader of the opposition movement, although it remained the mouthpiece of Ukrainian politicians, endowed with the art of directing… and incredible turns.

“You can like or dislike Saakashvili, but he is on our side of civilized barricades, said sorry to the other reformer, member of Parliament, Mustafa Nayyem. — Loss of Ukrainian citizenship is not only foolish, but it is also a sign of weakness, which does not paint the President.”

There is another explanation for the decision. This strengthening of the Ukrainian-Georgian friendship for joint opposition of their Russian neighbor. July 18, Poroshenko has visited Tbilisi to discuss the intentions of the two States to become members of NATO and the EU. According to Mikhail Saakashvili, who released a video of his speech on Facebook, the Ukrainian President actually secretly met with billionaire Bidzina Ivanishvili, who holds the reins of power in Georgia in 2012, and Saakashvili did his inveterate enemy. In this video, the former President of Georgia promises at all costs to return to Ukraine.