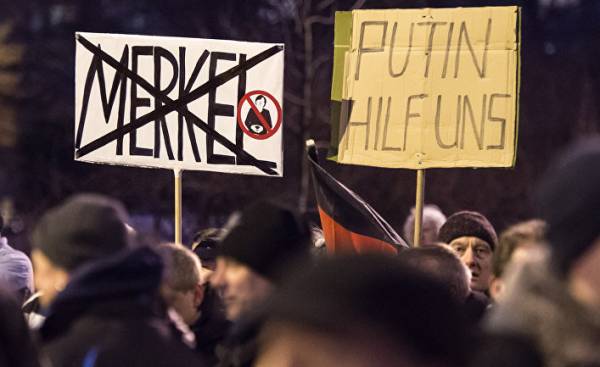 In recent years Europe has faced many problems due to migrants. Just as the USA during the Second world war helped Europe and prevented the Exodus of the population of Europe, based on European Union countries today are also trying to implement a new “Marshall plan” for Africa. His assistance and private investment Europe and, in particular, Germany strive to prevent the migration from Africa.

After all, Germany is not separated from the rest of the world oceans, which would protect it from migration, as the US and the UK.

Germany 2017, of course, not like the America of 1947. It is, firstly, as a much smaller and not strong enough militarily. Therefore, Germany must help other EU countries to, for example, organizations such as Boko Haram, has not created the migration.

In this regard, Merkel tried to use the G20 summit to draw attention to the “Marshall plan” for Africa. As you know, Poland was the first country that spoke in 2014 about the need to take measures against the aggression of Russia against Ukraine, but the country that first implemented this a protest against Russia were Germany led by Merkel. Merkel was approaching the position of leader in Europe.

But in Germany and Berlin is not the most favorable relations with Poland and Warsaw. In memory of Poland living Germany during the Second world war. So, for example, Poland did not want to accept migrants, while Germany and other EU countries supported the migrants, Poland has decided not to provide any support.

In their speeches, Merkel stressed the need to fight with the United States and trump. In Germany, Donald trump is extremely negative about. But even before the end of the year, in September, Merkel is also elections. Trump opposes free trade because of the 300-billion deficit of his country in foreign trade and in fact against Germany because of its large surplus.

Of course, Germany, unlike the USA, does not have such an army that can play an important role in the great war. So Merkel encourages US to understand the economic approach of their country and to spend his life in the United States. To change Germany does not want to.

At the same time, Merkel is moving closer to a new French leader Makron and, apparently, believes that France and Germany, cooperating with each other, will be able to resist the US and the us-British Alliance that may occur.

Today the question of whether Merkel to take the lead in Europe, which it is expected to be the most discussed on the old continent.