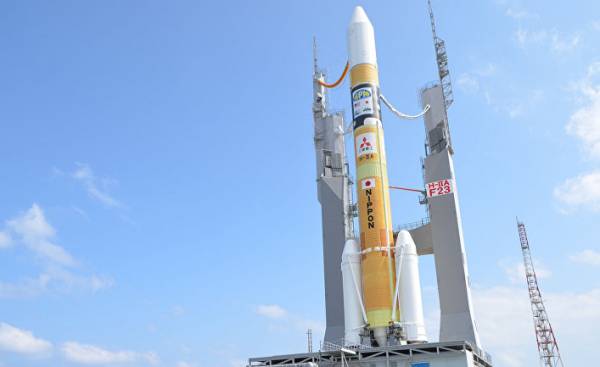 We began testing the first-stage engine LE9, which is the heart of the rocket of the next generation H3. The peculiarity lies in the fact that you have already changed the approach to the development of this engine that allowed the company to significantly cut costs. Against the background of global competition in the field of developing large rockets Japan defies the market, armed with their own technology.

H3 is the successor of the rocket H2A. Lead the development of the Japanese aerospace exploration Agency (JAXA) and Mitsubishi Heavy Industries, aiming to launch in 2020. H2A, after the start of operation of which 16 years have passed, not able to put in orbit a large satellite. In addition, the cost of launch, the components of the ten billion yen is too large, leading to reduction of its competitiveness on the world market. Therefore, the aim of the project H3 is to increase performance and reduce costs by 50%.

The first stage engine LE9 is the main power plant, which runs five minutes after launch, raising the rocket to an open space. Thrust will be increased by about 30%. Depending on the size of the satellite will be set two or three engines. In April of this year at the Tanegashima Space center began testing the new engine. July 12 completed tests of initial stage.

“We have basic functions like starting and stopping, and also received the necessary data,” said Koichi Okita, head of development in JAXA. In the autumn trials, the purpose of which is to determine the performance, lifetime and production costs. Thus, development close to its climax.

The first stage engine of the rocket Н2А is a highly effective powerplant using a closed loop scheme. Similar engines are installed on the space Shuttle. However, LE9 was used in the original Japanese technology, which is called the expander bleed. This method has already been used in the engine of the second stage of the H2A rocket.

The basic design of both engines is similar: liquid hydrogen and liquid oxygen pumps inject into the combustion chamber, the resulting combustion products exit from the nozzle, thereby providing thrust. However, in accordance with the new method was seriously simplified design.

Previously, the hydrogen was burnt in pre-combustion. The resulting gas has launched a pump that pumped fuel into the main combustion chamber. That is, the engine runs in two stages. This design is economical because the fuel is not burned in vain, but to manage it is not easy.

In accordance with the new method, the pump is started by using the advanced (expand) in the combustion chamber of hydrogen. Because the camera pre-combustion is not used, the number of parts is reduced by more than 20%, which reduces costs and increase reliability of the engine. It also reduces the risk of explosion in case of breakage.

Hydrogen, which was used to trigger the pump, not sent to the combustion chamber, and is released (bleed) from the nozzle. Fuel consumption increases by approximately 3%, but this engine is easier to manage.

In the 1970’s Japan began to produce main engines for large rockets, introducing American technology. Thus she tried to develop their own technologies and create production capacity.

In 1994 he developed a completely original Japanese H2 rocket, which used a two-step method. The fact that near Tanegashima Space center is located a dwelling house, therefore, we needed a highly efficient engine that would not explode when you increase the size of the rocket.

However, in 1999, Japan refused to H2 due to the fact that during one of the runs refused the main engine. Н2А reliability was improved by changing the design of the piping and reduction of the welds. 34 the launch was not a single crash due to engine failure, however, a new objective appeared: the reduction of costs.

Reducing the cost of launching missiles is a global trend. However, for this purpose, a variety of techniques. Europe has completely revamped the production system of the rocket “Ariane-6”. Russia is aiming to harmonize the various systems. The United States succeeded in re-launch of the Falcon 9 rocket, which is conquering the global market due to low prices. It is expected that the costs of us missile will be even lower.

In 2020-e years the major players will bring to market next-generation rockets, which will inevitably lead to increased competition in the field of commercial launches. “In order to survive, we decided to give priority to reducing costs, not increasing efficiency,” says chief project engineer Yuji Mori (Mori Yuji).

Will the H3 rocket to conquer the world market by reducing costs and ability to orbit large satellites? The key to this successful development of the LE9 engine.