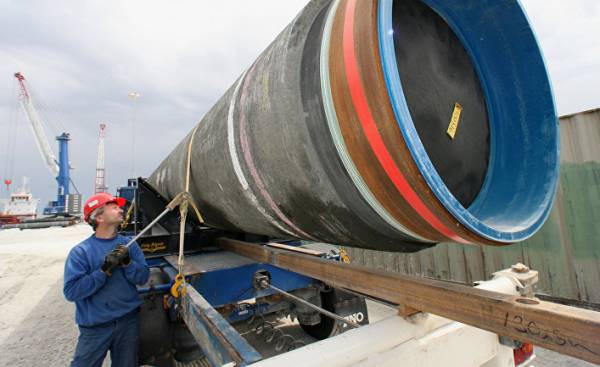 Dear Russia, welcome to the “axis of evil” by George W. Bush.

Dear Europe, but remember how you denounced Russia every time she voted against the will of the establishment? You happily put Russia on the axis, denouncing her for her actions, which makes your ally, United States of America. And now your biggest partner for energy turned into a virus, and the virus can be quite costly.

The Europeans might not like the new wave of contempt of Congress against Russia. This is especially true of large oil companies. But they probably still go on the beaten path Washington with the exception of some concessions. They with very high probability will have to face fines that will put the U.S. Treasury on a new gas pipeline between Russia and Germany, known as the “Nord stream-2”. Their leaders say that they will give a symmetrical response, as announced on 24 July, the newspaper Financial Times.

Now the Senate must vote on the bill on new sanctions against Russia. Included in the bill on sanctions against Iran of the amendment in relation to Russia include the imposition of restrictive measures against Russian financial and energy companies around the world. Primarily this will affect the pipeline “Nord stream-2”. It builds a joint venture involving Gazprom, Germany’s Wintershall and Austria’s OMV. When, in June, became known details of the new law, the German and the Austrian government have come to such horror that released a statement which contained exclamation marks. Thus, they cautioned Congress against the adoption of the amendments. But it is not important what you’re thinking, Europe. They’ll do it anyway. And you still go after them.

“It’s a pretty funny situation, because Europe, at first afraid that trump will lift sanctions, says Thijs arent (Arent Thijsen), the CEO of the company Blauwtulp Wealth Management. Now the opposite is true, and the EU, especially the Netherlands and Germany are unable to accept these new sanctions over Nord stream”.

No one outside of Washington has not expressed support for these sanctions. American technology companies are concerned because they work with sanctioned Russian intelligence services

American oil companies — especially those that sell Russian drilling equipment is concerned because this new foreign policy initiatives means a ban on the sale of Russia of certain equipment.

The French in the last year voted in support of lifting the existing sanctions against Russia, but it’s so useless and failed.

“Foreign companies are likely subject to us sanctions when the risk of losing American markets, if they continue to do business with Russia, says Ariel Cohen (Ariel Cohen), a senior fellow at the Atlantic Council. — It is difficult to underestimate the fury of the Kremlin in relation to such drastic measures.”

And the United States and Europe have imposed sectoral sanctions on Russia in the summer of 2014. The purpose of their policies in full agreement with each other, was the punishment of the largest state companies of Russia’s support for militias fighting against the Ukrainian government. Russia annexed Crimea, a southeastern Peninsula of Ukraine, in March 2014. It happened after the Autonomous government of the Peninsula voted for its secession from Ukraine and its population in the mass, approved this decision. However, many in the West believe that this vote was held under Russian pressure and still consider Crimea part of Ukraine.

A similar movement emerged in the East of Ukraine — with the official support of Russia. These mass protests became the reason of sanctions, and their removal depends on stop Russia to lend their support to the warring rebels. According to the Organization for security and cooperation in Europe, the fighting did not stop.

Europe has extended its sanctions against Russian oil companies and banks in June. Gas companies were largely excluded from the sanctions, because Europe is dependent on natural gas supplies from Russia. And here we come to the question of the “Nord stream”.

“In the opinion of Europe, Ukraine and Turkey — transit country is associated with a high probability of risk. And the thread she needed,” says Ian Dane (Jan Dehn), the head of the research Department of the company Ashmore Group in London. Ukraine was a main transit route to Europe. She stopped selling Gazprom’s gas to Europe and is suing the company in the courts of Stockholm. Gazprom currently busy building a new pipeline through Turkey. The pipeline was not mentioned in the bill on sanctions. European companies largely Finance the pipeline, but are not the owners of this project.

Responding to a question about whether Wintershall and OMV to withdraw from the project “Nord stream-2” in connection with the sanctions, the Dane said that in their place will come the other company. This will happen if they get guarantees from the government. “Stakeholders are many,” he says.

Europe is likely to try to make public or written promises that sanctions will not affect European companies. The point at which govorito that the sanctions will fall projects, Russia’s share is 33% or higher can be regarded as the sign of a successful European lobbying. In another scenario, Europe can try to use the “lock law” of the EU, which States that any decision based on extraterritorial American laws can not be applied in the European Union.

“Nord stream-2 was in a vulnerable position, but this is the whole point. This is a warning to Europe,” says Sybren de Jong (Sijbren de Jong), an analyst in the energy sector the Hague centre for strategic studies. Ukraine said that “Nord stream-2” completely eliminate it from the transit route from Russia to Europe. “Now the companies have to weigh their risks. The response from Europe would be short-sighted,” he says.

Trump has said he’ll sign the bill. He is almost forced to do it. If he vetoed it, the veto would have been the impression that he stands to the side of his Russian counterpart Vladimir Putin.

Most members of the democratic party, the Republican establishment and the Washington foreign policy elite — including former and current heads of the intelligence agencies — believe that Putin personally led trump to power. An ongoing investigation about intervention of Russia gave a few results on the merits, but did not stop the history that the Kremlin manipulated the voters and helped Trump to become President. Any meetings with the Russians immediately made a subject for investigation, if not a direct proof that Russia wanted to help to elect trump and get certain privileges in case of successful execution of the task. As a result, the tramp is forced to take a tough stance against Moscow.
Russia is also seen as an enemy of the regime change.

This country stands in the way of Washington’s list of targets, Syria and Iran. The detente with Russia unties the hands of Putin concerning the future of Iran and Syria. The exclusion of Putin from the game gives Washington the opportunity to accuse them of supporting the enemy.

Here storm flows, which had to face Trump. In the Russian question he gets almost no support.

The result is in jeopardy the Russian business in Europe. However, it is not limited to fines against energy companies. The Senate bill calls on the Director of national intelligence, state Department and the Ministry of Finance to consider the inclusion in the sanctions lists and some Russian securities. The Senate demanded within six months to install, is equivalent to the purchase of Russian securities or shares of sanctioned companies, such as Gazprom, the financing of people included in the sanctions list.

The company ExxonMobil was fined $ 2 million for the transactions with Rosneft, whose CEO Igor Sechin is. Sechin appears in the sanctions list. As Rosneft, although in its case, the sanctions imposed only on certain types of drilling. Exxon filed because the penalty to the court for the Ministry of Finance.

If the government decides that owning securities of companies that imposed sanctions, is no different from providing capital to the persons specified in the sanctions list, everyone rushed to sell Russian debt and equity securities. It will be extremely devastating.

“We belong to Gazprom. If their shares be subject to sanctions in Europe… the only thing I can do is to sell them, says Thijs. — It will be very unfortunate”.

Some Russians believe that it will only get better.

“The negative reaction to the sanctions could be a real chance for Russia in Europe”, — says Sergey Strokan, a columnist for the Russian daily newspaper “Kommersant”.

“Unlike the US, the EU, spoke out against new us sanctions, and has serious economic interests in Russia, its leaders with all the current stiffness is more professional and predictable — they don’t need to explain the weight and importance of Moscow. Abandoning bets on flashy European outcasts and making the European direction of its relations with the Euro-Atlantic community backbone, Russia will save the West for himself, though, and will lose America.”

As Europeans, hesitantly lowing some vague speech about retaliatory measures against the expansion of sanctions, Russian also can throw words to the wind. It will be a strange page in the history of relations between Europe and the United States, if the first in issues of global importance will be on the side of Russia, not the United States. However, perhaps only in a crazy world, created by Donald trump, Europe, which is when she said about his collusion with Russia, is now eager to cooperate with Moscow — the same which, they feared, would help Le Pen victory in France and forced the British to vote for “Brakcet”. At the same time, the American President increasingly pulled away from the Russian orbit — if he does have ties with Russia in addition to connections with financial tycoons. In such a world the USA will be harder to promote its foreign policy objectives in Syria, Iran and Ukraine. Whether trump despise so much that the Russian picture of the world will prevail is a matter of time. Investors are not ready to put on this situation.