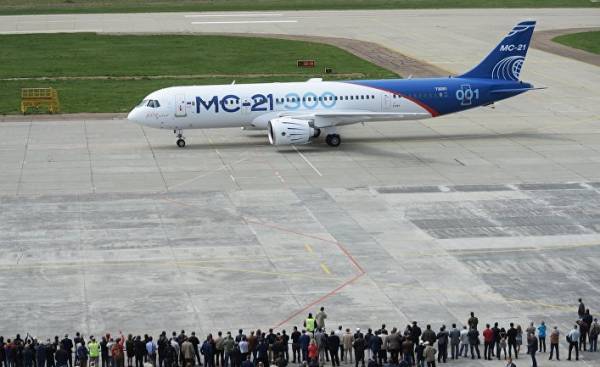 Anatoliy Serdyukov, Director of the aviation industrial cluster of the state Corporation rostec, spoke about the recently released Russia’s innovative single-aisle aircraft MS-21. He stated that the joint work of the UAC and Rostec will allow you to enter the total volume of deliveries of MS-21 more than 1,000 aircraft until 2037. The liner goes on the most capacious segment of the world market in the world today there are about 15 thousand aircraft, and the total needs for the next 20 years will be approximately 25 thousand. According to Serdyukov, the MS-21 with its flight characteristics can, with advanced technology and innovative components to surpass Boeing and Airbus.

Aeromag: What are at the moment production capabilities for the creation of MS-21 aircraft?

Rostec is the main supplier of components for MS-21 and partner of the United aircraft Corporation (UAC), direct the manufacturer of the liner. The holdings of the aviation cluster of the Rostec — UEC, a subsidiary of KRET, Technoceramica, the holding RT-Chemcomposite, as well as VSMPO-AVISMA is actively involved in the design and manufacture the majority of the components for the liner from the engines and composite materials to the components of the hydraulic, fuel systems and control systems.

Russian certificate will be received in late 2017-2018, and deliveries are scheduled to begin in 2019. Plan KLA indicators of production capacity in the initial phase — about 20 aircraft a year, after all cooperation to its full capacity of 70 aircraft.

Speaking about the long term, the joint work of UAC and Rostec will allow you to enter the total volume of deliveries of MS-21 more than 1,000 aircraft until 2037. The liner goes on the most capacious segment of the world market in the world today there are about 15 thousand aircraft, and the total needs for the next 20 years will be approximately 25 thousand.

One of the main products which the Corporation delivers for the MS-21 — bypass turbofan engine PD-14. This is the first completely domestic powerplant for civil aviation, created in Russia over the past decade. The second phase of testing PD-14 was held in late may of this year. And we consider it a great success.

It is important to understand that creating a new engine takes a half more time than the development of the aircraft. Thus, the speed with which rostec has created a fundamentally new engine (since 2008, it’s only been nine years), is a good result. The new generation engines have a reduced fuel consumption and low noise and pollutant emissions, thanks to this engine meets future requirements for the protection of the environment.

— The media reported that interest in purchasing the MS-21 was expressed by Hungary, Bangladesh and India. Can you tell us more about the negotiations with Indian carriers?

— Indeed, a number of countries, namely India, Hungary and Bangladesh, have already shown an increased interest in MS-21. Our ambition is definitely not restricted to the domestic market. Russia wants and will work hard to ensure that the aircraft is actively exploited by other States. And we see interest in the aircraft from our foreign colleagues.

Rostec will provide all support on building effective mechanisms for the promotion of the aircraft and service centres. For us it is crucial that all systems of the aircraft, manufactured by Rostec enterprises, received the necessary maintenance and worked flawlessly.

— How the company plans to compete with such giants as Boeing and Airbus, in the next 5-10 years?

— Indeed, the work is conducted under the conditions actually existing duopoly of Boeing and Airbus. Despite this, Russia has something to offer to the customer. According to its flight performance the aircraft MS-21 will surpass competitors with advanced technology and innovative components, most of which was developed by Rostec enterprises specifically for this boat. MS-21 the customer will be offered a contract full cycle.

It is very important that together with colleagues from oak we are now able to offer not a single product, but a line is a SSJ-100 and MS-21. Moreover, the infrastructure that was created and is created under the project Sukhoi Superjet 100, will be used for the project MS-21: the warehouses, and training centers, logistics, it and partners worldwide centers for maintenance, logistics base services. Named all infrastructure is built and for the Sukhoi Superjet 100 and MS-21. We must not allow the aircraft went to a customer and stood. You need to make the plane fly.

If we add to this the plans of the KLA for the production and delivery of Il-114 in the niche turboprop aircraft, as well as the project of Rostec, UAC and the Chinese partners for the production of wide-body long-haul aircraft, we will be ready to offer the customer a line of world level, which has the entire range of sizes.

— Are there any suppliers of components for MS-21 Indian companies? If Yes, tell me more.

With the Indian partners we have developed an effective scientific and industrial cooperation in the field of military aviation technology. We have all the possibilities to transfer this experience in civil aviation.

— What are the types of aircraft that produce Boeing and Airbus, will compete MS-21?

MS — 21 claims to the same commercial niche that the Boeing 737 MAX and Airbus A320neo. However, its performance data and cost-effectiveness plane MS-21 is superior to these analogues in its class. The estimated reduction of direct operating costs in the operation of MS-21 aircraft will be 12-15% in comparison with analogues and by 6-7% compared to their upgraded versions.

The main contribution to the improvement of the flight performance of the aircraft will make a wing of composite material for which is supplied by enterprises of Rostec. A similar wing for single-aisle aircraft with a capacity of more than 130 passengers has been created for the first time in the world. Overall, the share of composite materials in the design of MS-21 aircraft in excess of 30%, which is unique for this class of liners.

Rostec is also made of composite Aviacompany tail. This technology of production of components made of composite materials ensure the competitiveness of the aircraft. Their distinctive feature was the extensive automation of the process. Weight composite parts in aircraft design will be more than 30%. In addition, Rostec wholly provide the needs of the programme MS-21 in the Titan, put the parts (chassis), avionics and avionics.

The plane is oriented to the mass segment of the transportation market, its capacity ranges from 163 to 211 passengers. Thanks to the largest in the class single-aisle aircraft, the fuselage diameter of the aircraft MS-21 will provide passengers with a new level of comfort. Such a decision would significantly expand the personal space of each passenger will allow to pass in the aisle with carts of flight attendants and will provide airlines faster turnaround time at airports. Thanks to the installation of larger Windows, increased natural light to the passenger compartment. The aircraft will be maintained comfortable for passengers air pressure and superior microclimate.

— How many aircraft currently has orders?

— At the moment the portfolio of orders for MS-21 aircraft is 285. Of them for 175 cars signed solid (provincialnye) contracts, and a further 110 aircraft reached a preliminary agreement and signed the framework agreement. A subsidiary of the Rostec “Avia capital Services LLC” was the first and today the largest customer for the aircraft MS-21, we signed a firm order for 85 aircraft.

“Aeroflot — Russian airlines” and “Avia capital Services LLC” have agreed about the lease of the Russian flagship airline’s 50 aircraft. Several Russian leasing companies have firm orders with deliveries starting in 2020 and is currently actively looking for clients. Rostec (Avia capital Services LLC) can offer 35 aircraft from 2025 operating or financial leasing.