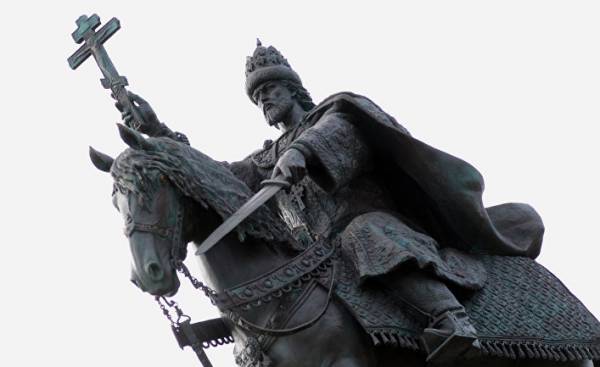 Recently, Russian President Vladimir Putin has finally graced us with “big news”: it turns out that Tsar Ivan was not so terrible and all this propaganda machinations of the Vatican.

In Russia, where power is increasingly in need of new arguments to justify its internal and external policies, and to legitimize the strengthening of the authoritarian regime, restricted human rights, President Putin speaks to the history of trying to rehabilitate those figures whose policies could serve as a justification for his own.

Policies do not get tired to give us surprises in different areas, especially in regard to the brainwashing of citizens. So, the President of Russia Vladimir Putin has finally graced us with “big news”: it turns out that Tsar Ivan was not so Terrible and all the machinations of the propagandists of the Vatican.

At the meeting with metallurgists Putin said: “Take a famous legend that Ivan the Terrible — Ivan the terrible killed his son. It is still unknown, he killed his son or not. Many researchers believe that he didn’t kill anyone at all, and made that the papal Nuncio, who came to him to negotiate and tried to convert Orthodox Russia to the Catholic Russia. And when Ivan turned him down and sent him to the known address, having all sorts of legends and so on and so forth”.

As they say, the Russian leader “has killed two birds with one stone”: “rehabilitated” Ivan the terrible and confirmed the common idea that to blame foreigners in Russia — a long-standing tradition. The nickname “the terrible” was given to the king, Antonio Possevino, who was papal legate and Apostolic Nuncio not, as Putin claims, because it does not have a permanent diplomatic representative of the Holy see.

Another justification, which gives Putin the crimes of Ivan IV, is: “If you look at that period of time in other countries, all the same it was everywhere. This time it was violent enough. And I don’t want to say that it was a all white and fluffy, Ivan the terrible, he was probably the man hard, probably.”

Apply these insights to the twentieth century and the tragic results. By the way, the Communist dictator Joseph Stalin actively rehabilitated the image of Ivan IV, trying to justify the cruelty of the king and his oprichnina [the political police of the time] to all strata of Russian society. It is advisable to review the film of Sergei Eisenstein “Ivan the terrible”.

It is curious that, making such statements, President Putin refers to the “many scientists” but does not specify names, however the most well-known Russian historians and a stone will not leave from the conclusions of the current Russian leader.

Sergei Solovyov, one of Russia’s leading historians, recognized the ambiguity of the figure of Ivan and his historical achievements, but stressed: “People of flesh and blood, he was not aware of the moral and spiritual means to establish the truth and outfit or, worse, conscious of forgot about them; instead of celenia it strengthened the disease, more accustomed to the torture, the stake and the scaffold… do Not pronounce the word historian excuses for that man.”

Another great Russian historian Vladimir klyuchevskiy spoke more harshly: “the Positive meaning of Ivan in the history of our state is not so great as one would think, judging by his ideas and undertakings, by the noise which produced his activity. The terrible king more conceived than did the… the Life of the Muscovite state and without Ivan settled down in the same way as it was built before and after him, but without him this dispensation would be easier and smoother than it was with him and after him: the most important political issues would be solved without the shocks, what were they prepared.”

One of the most famous crimes of Ivan the terrible, checked and confirmed in the historical sources, it is the murder of an Orthodox Metropolitan Philip. Critic of the repressive policies of the king, he was defrocked and exiled to a monastery, where he was killed Malyuta Skuratov.

The Russian Orthodox Church glorified St. Philip, who was considered a Martyr. But the current Orthodox hierarchy is clearly not enough courage to raise their voice against the existing government, on the contrary, they serve it with all devotion and support. Some influential Orthodox clergy favour a return to monarchy, although not dare to pronounce the name of the next king. And at the same time continue to say that “all authority is from God.”