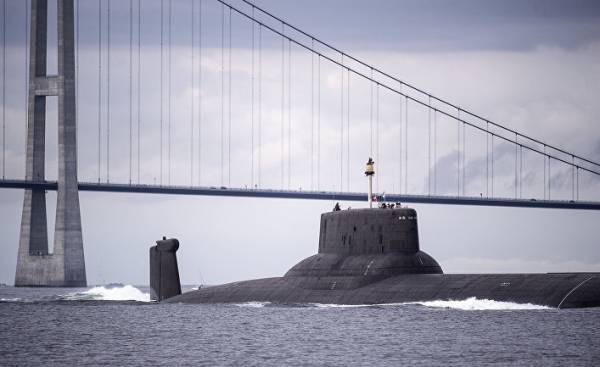 Passage of vessels through Baltic sea is, probably, the Russian warning to Sweden.

Originally it was supposed to be 36 vessels, but in the end there were only four, and experts still don’t know why.

On Friday, nuclear submarine, Vladimir Putin, “Dmitry Donskoy”, along with three other vessels crossed the Baltic sea, heading to the parade of the naval forces in St. Petersburg. The fact that Russia sent its ships by way of Sweden, Advisor for security Affairs Joachim von Braun (Joakim von Braun) finds a clear signal.

“Russian armed forces are sending us a clear signal: they want to emphasize that they are large and strong. Russia — the state, looking at the countries that are considered weak, from the top down, that is why it is so important to be noticed”.

Despite this eloquent naval presence, von Braun stressed that the Russian armed forces considerably less money than they are willing to admit.

“We may observe, as Russia flexes its muscles, sending their ships, but Russia is not enough money. The reason is largely that Russia is dependent on exports of oil, gas and weapons. Only these three export industries in the country really significant, and now the price of oil plummeted,” explains von Braun.

In the words of Joachim von Braun, Russia previously said that it wants to send into the Baltic sea 36 vessels. Still it is unknown what happened to the other 32.

“Russia has not given all the information. She reported that sent 36 vessels, but it is obvious that it is not. Maybe it was too expensive for the Russian armed forces. We don’t know yet. But we are watching the situation”.

Russia belong to the three ships that crossed the Baltic sea along with the submarine “Dmitry Donskoy”.

“Probably, we are talking about “Vice-Admiral Kulakov”, “Marshal Ustinov” and “Peter the Great””.

Cruiser “Peter the Great” is considered the most powerful vessel in Russia. Its length exceeds 250 m.

This show of force, Russia sends a warning to the world, in this case, the signal includes Sweden.

“They want to intimidate and force us to listen to their position in international Affairs. In my opinion, to threaten its neighbours ugly,” says Joachim von Braun.

Rare in the Baltic sea

The defense Ministry shows no concern in connection with the presence of these ships in the Baltic sea.

“We always know what’s going on near our borders, and we adjusts the alert in accordance with the situation”, — the press-Secretary of the Ministry Jesper Fun (Jesper Tengroth).

More surprising, he demonstrates, when it comes to the choice of the route of the submarine.

“Vessels of this type are not often seen in the Baltic sea. In fact, they are deployed in the Arctic ocean. However, Russia is not doing anything illegal, she has every right to be in international waters.”