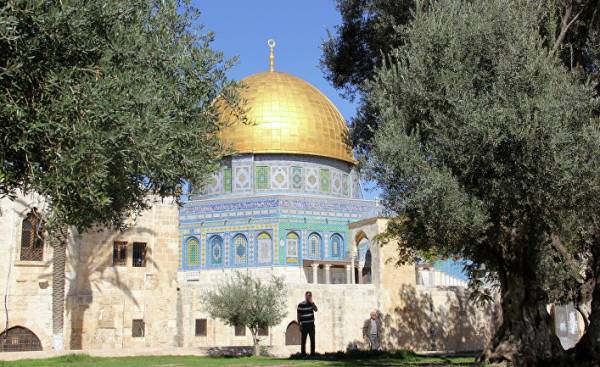 After the murder of two Palestinians by Israeli police on July 14 Israel has decided to install metal detectors on the approaches to the Temple mount in Jerusalem. This step enraged the Muslims, and clashes on 21 July, killed eight people. June 23 shooting at the Israeli Embassy in Amman has claimed two more lives. The correspondent of Le Monde in Jerusalem Piotr Smolar answered questions from users.

Tuile4: according to the video from surveillance cameras, the Arab militants received weapons in the al-Aqsa mosque on the Temple mount. Isn’t this justify the installation of metal detectors?

Piotr Smolar: metal Detectors suddenly began to imagine how the solution to all problems with the Palestinian aggression in the old town, but it is not. First of all, they were not installed at the entrance to the old city, and two streets on which the Muslim faithful go to the Temple mount. For example, they would not have prevented the murder of a border guard Hadassah Malka June 16, at the Damascus gate.

The decision to install the detectors was made after the killing of two Israeli policemen and three Israeli Arabs on July 14. Police posted video footage of their accomplice brought a gun to the temple mount. The government decided to take action, following the recommendations of the police.

Law enforcement went to exceptional steps, closing the mountain for a visit and to arrange the searches in the building involved in the shrines of the Foundation “Waqf”. The police suspected that there might be a warehouse full of weapons, but found only a few knives. Then they installed metal detectors, but not pre-consult on this matter with the Fund and the representatives of Jordan.

Dams09: is it True that the pilgrimage to Medina and Mecca to the Muslims, too, need to go through metal detectors? If Yes, then why raise a fuss about the Temple mount?

— Yes, but in such a comparison overlooked very important points. The al-Aqsa mosque and the entire Temple mount represents the heart of Palestinian identity, cause them to have a lift of pride and faith. Any experienced representative of the Israeli security services will tell you that it is not necessary to touch the mountain and its fragile balance, if you don’t want to ruffle the Palestinians.

Access to these Holy places rests on the status quo. Pray there are entitled to only Muslims. Any concerning their environment the decision should be subject to prior consultation.

Ahmed: How is the relationship of Israel and the Foundation “Waqf”? Can you coordinate so that the “Waqf” to ensure security?

— Thought metal detectors humiliation and the violation of the status quo. They therefore called on the faithful not to pass through them, and to pray in the street. In any case, the main partner with which to discuss new security measures, is Jordan.

As you remember, in November 2014, Israel and Jordan concluded an informal agreement to reduce tensions on the Temple mount. Israeli Prime Minister Benjamin Netanyahu pledged not to allow visits by Ministers and MPs in the Holy place for Muslims. Measures have been taken against Jewish extremists, who dream to build a new Church.

Further, Israel refused access restrictions of Muslims, depending on their age and gender. Jordan, in turn, promised to stop young Palestinians, whom the Israeli police were considered the instigators of the riots, to penetrate by night to the temple mount. Until recently, the parties to fulfil all these commitments, which explains the absence of serious conflicts.

Guest: metal Detectors are used only for security or pursue in and the political goals of “territorial” pressure on the Palestinians?

They were installed for safety reasons, while in Shin bet (internal security service) and the army feared the possible consequences and, in particular, outbreaks of aggression on the mountain and on the West Bank of the Jordan river. There is also a political calculation. The nationalist and religious right, headed by the Minister of education by Naftali Beneton think metal detectors establish Israeli sovereignty.

Do not forget that until the 1990-ies in Israel there was a strong consensus of rabbis that Jews should not ascend the temple mount. There stood the first and second temples that were destroyed and 70, respectively 586 BC, But subsequently covered by a Messianic impulse right gained momentum, the rabbis-the extremists were pushed back believers, Ministers and deputies were not in their side. The Palestinians had the feeling that Israel have a secret plan to partition the Temple mount between the two religions.

Guest 75: What are you talking Jordan, which owns the sovereignty on the Temple mount?

— Jordan all week, took a very restrained position and sought to convince the Israeli authorities to abandon the metal detectors. She had a very close relationship with the Jewish state, and it is not interested in an open crisis. Whatever it was, it continues to insist on the prerogatives of the Foundation “Waqf”, takes into account the opinion of living in Jordan, Palestinians, etc.

Yesterday the situation was aggravated assault on a security officer of the Israeli Embassy in Jordan. He killed his attacker (his motives, apparently, were related to events in Jerusalem), as well as the owner of his apartment. Both countries are seeking a solution that would allow everyone to save face.

JiKa: Can criticism from the Arab League and the President of Turkey to influence the position of Israel? Will calm down the situation, if you remove the metal detectors?

— The regional environment certainly plays a role, but the deciding factor you may call it. First of all, the criticism from the Arab League was slow and moderate. Sunni countries are absorbed by the situation with Qatar, as well as a confrontation with the Shiite axis headed by Iran. They are not interested in the opening in Jerusalem of the second religious front.

As for the second part of your question, the more time passes, the stronger is exacerbated. The more prolonged the crisis, the higher the risk of Palestinian aggression in Israel and the West Bank of the Jordan river. Those who have the task of finding a compromise, too, are not in the best position because they have crushes public. Netanyahu doesn’t want right-wing nationalists accused him of surrender. The unpopular Palestinian President Mahmoud Abbas is trying to exploit popular anger and announced the severance of all contacts with Israel, including on security issues.