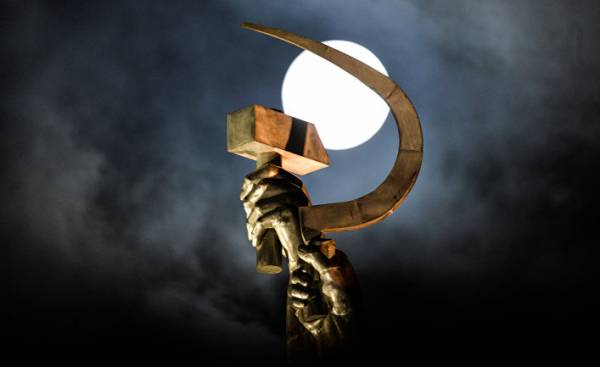 NATO has created and presented a video about the partisans of the Baltic States, the Kremlin raised voice answered, our diplomats reacted infographics on Twitter, the Russian foreign Ministry said the propaganda text on Friday evening on Facebook, being sure that the weekend will be able to present their lies to those who listen.

In other words, the General landscape of diplomatic war. The only difference is that this time, the active position is occupied by the Kremlin, and the West, but the flagship of Russian foreign policy was convinced that has put the West in place. And then we came. Took the hashtag #Criminalsearches and as the hammer hit the Kremlin where it hurts. I will not say what, but I think it a few days ago an elderly man in the Park reformatted images showed the event planner Erica.

17 thousand the lowest ratings that brought down the rating of the Ministry of foreign Affairs of the Russian Federation to unity. If it had any practical value? At first glance, no, it’s just intolerance of civil-minded people to open lie. Much depended on Russia’s reaction. It was priceless. Obviously, the Kremlin and worst nightmares never imagined such a reaction of the citizens. After all, one of the most important narratives of his propaganda about the Baltic States — all gone, no military, NATO and EU membership do not like all indifferent and no one will go to protect any home. And now, it turned ugly.

The first reaction on the Russian portals were Lithuanian hackers and coordinated attacks. Failed. All pit Lithuanians (and later the Latvians, Estonians, Ukrainians) were real people, but when “Facebook” tested those who estimated the Russian foreign Ministry 5 stars from 1 rating of 200 marks 12, since all the pages were fake. How unexpected. Early on Monday morning, the Kremlin admitted defeat and turned off the ability to estimate your page on Facebook.

It seemed a nice change. Citizens of small countries made the main mouthpiece of the Russian foreign policy turn tail and go in the corner. And all this could end. A small victory in the information war, which, without complex solutions would have only a one-day result. The elephant could just wave your trunk, and ignore the annoying fly. But no. And then we saw how much it hurt the Kremlin. What kind, more than to the man in the square Reformed when its on the ground laid by the police. It was so painful that eyes were red mist and rage showered error.

On the pages of the Ministry of foreign Affairs of the Russian Federation in social networks every day there is a gall writing to the address of Lithuania and personally, “Lithuanian promoter of Tapinas”, slipped mask of feigned politeness and appeared in diplomatic terms “nerds” and the like, our hashtags began to turn in the major Russian news broadcasts, he immediately activated the fifth column in Lithuania, talking and basic propaganda portals of the Baltic States.

In the European Parliament out of the bushes came out of the Czech Communist Jiri Mastalka, which has no political weight, who proposed to punish the Baltic States for the strengthening of sentiment to fascism, as the Kremlin portals presented this “news” as the fact that the EU will punish us. If anyone needs an example of creating fake news — please take and use. That’s the kind of pain.

But, as noted by Aurelius, Chatkevicius in information war the one who less always good when razvorachivat, large began beating him. So he descends to the level of small, and in this case such hysteria, the Russian foreign Ministry many caught the eye. And a nice change is no longer a trifle. We saw not only the Kremlin but also the opposition and the Kremlin. Saw the Ukrainians saw those who are interested in politics in the West, saw our allies. Saw the world’s media as clumsy Russian representative during the briefing was justified, responding to a question about the “attacks of Lithuanian activists”.

Maybe it’s a small thing, but the reaction of 20 thousand people should improve the mood of our friends, to show that in this war they are not alone and that they are important to us. Why the Russian portals and became hysterical, they were trying to say “20 thousand, because it is only 0.7% of the total population. This is a tiny amount.” Tried to speak and have understood that everything is relative, that they themselves, without money the Kremlin (and even with them) not United would be a tenth of this amount. And we rallied. Without money, without gifts and without special appeals. And if need be, rallying and 50 thousand. And not only virtual.

The Kremlin understands this and it becomes even harder, since falling is such a lie as narrative “indifferent those who left the Baltic States”. He takes another, is also time-tested. We know it is to sow discord, embroil ourselves, our neighbors, our minorities. The Lithuanians shot the Jews, the Holocaust, the General Wind, the Lithuanian punitive battalions in Belarus. But the Kremlin is nervous, the Kremlin is in a hurry — on the road out of the accusations against Lithuania, though she falsificare the story, accusing the Soviet Union in collaboration with Nazi Germany, on the track derive from an interview with Ruta Vanagaite “Our”, taken from a Belarusian portal.

How desperate must cover the Russian foreign Ministry, he began to rely on data from a Belarusian portal. But root is also good, but it is in two languages is justified on the foreign Ministry’s website, saying that her book is not for Kremlin propaganda, and here is her interview — a real gift on a saucer for our enemies. From the interview the impression that the book was published almost secretly, that it almost passed from hand to hand, that the publisher was intimidated that Lithuania is a book ignored that there were so many threats that at the Book fair all three days standing guard.

Ruta, is it serious? I understand public relations, etc., but we know how it really is. The book was supposed to be and became a bestseller, she was many times reprinted, it is available, it advertised all the media, all could speak at the book fair was tense but constructive discussion, and the guards were part of the show. But the Kremlin this interview was saved and pulled out when it became very painful. So be it.

To paraphrase a classic, yet we will attract the eye of Sauron and its resources, our friends will be more space. The Kremlin pulls out one trick after another, and even more nervous as he sees a blatant Lithuanians hosted on the official website of the Russian foreign Ministry in the Holy of holies of his advocacy, both at home. But such action — it is certainly only one litmus test that showed and our spirits, and hysterics of the Kremlin.

We must go further. For us the main thing — not to make mistakes, not to please the Kremlin domestic quarrels and not to seek absolute truth. We need time to recognize the sore spots of our history, to put up with black spots in it and work together to find the way forward. And speaking about this publicly and openly, stepping together with the March of remembrance on the road to molėtai, we do it. We can overcome myself and to maintain dignity. We talk about our history, we hurt for her and we will do everything to be able to quietly look in the eyes of our grandchildren and great-grandchildren.

Today’s Kremlin can’t do and never will. He’s angry. And despite all his power, all their endless propaganda resources feeling. And it looks like that guy from the square of the Reformed, who publicly brandished their dignity, feeling cool, while passers-by did not show on his fingers. And then the police came.

Bach and not them