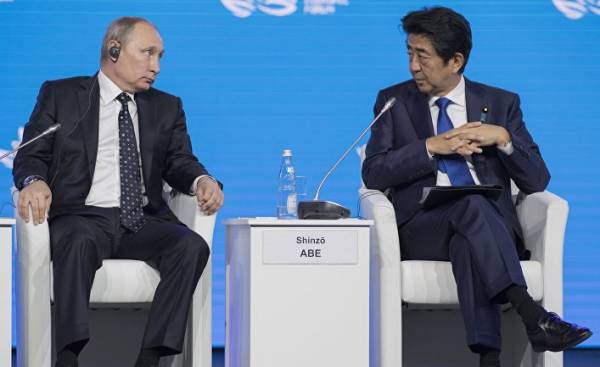 The first thing I saw the Japanese delegation of officials and businessmen, arrived at Shikotan in the early morning of June 30 to check the joint business, is the inscription in Korean on building the Marina. It is attended by companies from South Korea. The representative of Japanese government noted: “This is a message to Russia that if Japan does not invest in the South Kuril Islands, it will attract other countries.”

During the Russian-Japanese summit held in December last year, the parties came to an agreement to start discussion of joint economic activities on the “Northern territories”. This is the basis of the new approach of the Prime Minister of Japan Shinzo Abe, which he proposed in may last year in an attempt to break the deadlock on the territorial negotiations, which have not developed more than 70 years after the end of world war II.

Were offered projects in the field of tourism, fishery and so on, but it is expected that the Russian side will lead a discussion based on the Russian laws, therefore, will not be easy to create a “special system”, which will not violate the legal positions of Russia and Japan.

July 6, the day before the meeting between Putin and Abe in Hamburg, Deputy Prime Minister Yuri Trutnev in charge of development of the Far East, announced the creation of territories of advanced development (TOR) “Southern Kuril Islands”, thus shaking Japan. Because in this region will be granted tax benefits, this will facilitate the activities of foreign companies. This can be perceived as a threat to Japan: if the discussion of joint business drags on, the region can develop without Japan.

During the meeting between Putin and Abe on 7 July, which was 18 in a row, the heads of state discussed the problem of TOR. As she can not to harm the joint business, Prime Minister Abe said that Japan can not accept such actions. Putin evaded, however, became apparent discrepancies in the positions of the heads of the two countries.

It all depends on the international situation

Chances for settlement of the territorial problem became more. During the summit in may last year, Prime Minister Abe proposed a plan for economic cooperation of eight items, including energy and the development of the Far East, in order to intensify the talks on the territorial issue. It is hoped that this will be the culmination of post-war diplomacy, however, during a meeting with President Putin in his native Yamaguchi Prefecture in December last year has not been achieved any outcomes that could contribute to the return of the Islands.

We can say that the course of territorial negotiations seriously affected by the international situation. Russia was isolated from the international community after the annexation of Crimea in 2014. Experts believe that the Kremlin wanted to make a dent in the us-led coalition, made friends with Japan. However, in the presidential election in the US won Donald trump, seeking to mend relations with Russia, and the wind direction changed. A source in diplomatic circles said that as a result, Putin lost interest in Japan.

Russian-American relations have not improved after trump became President, however, Putin does not feel any desire to settle the territorial issue. He repeatedly said that he was concerned that if Russia will return to Japan the Southern Kuril Islands, where American troops will be deployed in accordance with the Japan-us agreement in the field of security. “Most likely Russia unnerving revitalization of American troops near the Korean Peninsula due to the deterioration of the North Korean problem” — believes a source in the Japanese foreign Ministry.

Despite this, the Japanese side hopes that Putin will be able to take the bold decision, if re-elected in the presidential elections in March next year. On 9 July, Putin held talks with former Prime Minister Yoshiro Mori (Yoshiro Mori), who was in Russia. Commenting on the peace Treaty negotiations, including the problem of “Northern territories”, Putin said: “I Have a growing desire to resolve this issue with Prime Minister Abe”.

Now Prime Minister Abe was on the verge of a serious crisis after he was re-elected for a second term. He suffered a historic electoral defeat in Tokyo. Also it was criticised in connection with the issue of educational institutions “Kake”. Decreased support in the Cabinet. He wants to restore its position through diplomatic steps, but this way is extremely difficult. On 8 July he wrote in Facebook, as if encouraging himself: “I will develop talks on a peace Treaty (with Russia) which concerned Japan for more than 70 years. I intend to move step by step, relying on a deep trust with President Putin.” 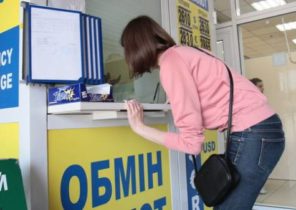 The Euro in Ukraine soared above 30 UAH