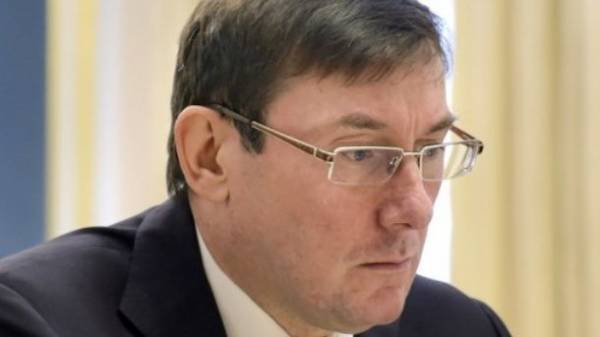 Prosecutor General Yury Lutsenko reprimanded the heads of local prosecution offices for poor quality work and poor procedural guidance in cases which are investigated by the police, reports “Ukrainian truth”.

At the meeting on the work of seven regional offices in the river he appealed to certain subordinates personally.

The most typical violations, according to the attorney General: shelter from the accounting and registration of crimes “fraud” for the sake of statistics.

“Berdyansk local Prosecutor’s office generally turned work to check the police on the subject of concealment of crimes. Only during random checks of Prosecutor’s office in register 9 hidden crime by police, 6 of them are in fact fraudulent appropriation of funds”, – said, in particular, Lutsenko.

He noted that the villagers complained that one of the entrepreneurs covered his son Ruslan, a Prosecutor of the local Prosecutor’s office and threatens them with violence for conflict over pastures.

The attorney General appealed to the head of the Berdyansk Prosecutor’s office Andrey Butenko, and on another occasion: “How is it that You do not see your area of 1.5 thousand (ha) of illegally planted land – then the grain is collected, and the DFS not be handed over for arrest? Grain what happened?”.

“Andrey Gennadievich, Ukraine is destroying the established corruption court sentences booze without snacks and prosecutors have no conscience! I ask you to leave the premises. Come enjoy the pasture, grain and prepare for the responsibility to the MPC (qualification and disciplinary Commission of public prosecutors – Ed.). I don’t see You as a Prosecutor the local Prosecutor’s office”, – Lutsenko declared.

“You have fifteen hundred acres planted – You can’t see without Kiev. Your employees scaring the villagers. I do not like such work. Please vacate the premises”, he added.

Lutsenko instructed the Prosecutor of the Zaporozhye region Valery Romanov to take this question on control: “within a reasonable period of time want to see your conclusions”

“Local prosecutors who won the competition and think that they are kings forever, this will not happen, we did not agree… Geninspektora will also be involved in this case”, he said.

The attorney General reproached poor job in exposing the criminal groups in various fields. In the procedural guide, according to him, the key issue is irresponsibility.

Lutsenko noted that in the Dnipropetrovsk region have lost the materials of two criminal proceedings, in particular, the case of embezzlement of UAH 35 million of the Fund of compulsory state insurance disappeared in transit between the police and the Prosecutor’s office, the police “allegedly lost” a case of misappropriation of funds allocated Dnipropetrovsk “Ukravtodor”.

In the Sumy region in the land the man to avoid responsibility due to the fact that the prosecution did not extend the investigation, he added.

Lutsenko requires a number of inspections and disciplinary sanctions up to dismissal.

“The Prosecutor without a conscience – defective Prosecutor”, – said the Prosecutor General, and said that when he makes comments – this should lead to disciplinary action

“In all the examples that I have mentioned – to deal with involved, the regional prosecutors: either the deprivation premium, if it’s a one-time event, or dismissal. It’s not a job, it is an imitation. The society paid the big salary that we worked and did not engage in this practice cover the perpetrators,” – said the Prosecutor General.

Earlier, Yury Lutsenko reported that the salaries of local and regional prosecutors will grow at an average 10 thousand UAH, the salary of the attorney General will become more 30%.