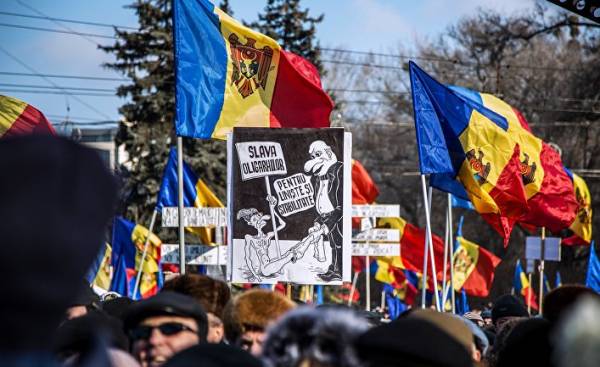 Every day the teacher ion Balan (Balan Ion) returns from school smelling of damp in the house which barely heats the brick oven. In the evening, the big man with the Stalin moustache sits at a makeshift station, and struggling with loneliness, trying to establish a connection with the rest of the world on one of the many languages known to him. “It’s hard to live away from his wife,” says 50-year-old teacher with a sad smile.

His gaze rushes to the window, a glass darkly which could be seen worn in public, the Moldovan village of Ignatei, reachable by a dirt country road. The silence on the street occasionally violates the squeaky wheels of the cart, or the roar of the engine emerging from the collapse of the USSR “Lada”. “There were pensioners and their grandchildren,” continues ion Balan, whose school employees was halved after the country gained its independence in 1991.

In Ignace, as well as across Moldova, in the family there is a father, mother, child or uncle who works in Europe and Russia, fleeing from unemployment and starvation wages in the former Soviet Republic. “Many never returned from voluntary exile,” ion Balan, who doesn’t even want to think about the prospect of divorce. His wife for several years working as a nurse in Italy. In the village, she comes twice a year.

At a salary of one thousand Euro she earns in a month as much as her husband for seven months at school. When the family will pay for the renovation of the house and the marriage of his daughter and son (in Moldova is costly), the wife will return to him, do not lose hope, ion Balan, bypassing their possessions.

His children went to study in Chisinau and Bordeaux. Father no illusions: back they come back.

In Ignace roof tie huts fall through winter under the weight of snow, and the gardens are overgrown with weeds. Zaposlenosti gradually covers the entire former municipality.

In the local administration Elena (on account of its 22 years of faithful work in successive mayors) opens the registry of the population: “Almost 7 thousand people under Gorbachev, 4 thousand in 1997, more than 2 thousand today”.

The mortality rate is twice the birth rate

And how many will be tomorrow? Mayor Alexander Kalarash (Alexandru Calaras), which has been a driver all over Europe before returning home, and prefers not to think about it. He’s not going to run for this post which brought him a lot of sleepless nights. “Women are removed in Italy, and men work on construction sites in Greece. The birth rate here is twice the mortality. In 2017, we have played 17 weddings, but only two couples then do not have collected your bags.”

Alexandru Calarasi has developed a good reputation in the village. It is called the honest, energetic and industrious, that means a lot more than any diplomas portachiavi corruption in the country. He repainted the town hall, repaired the hall of celebrations and marriages, kept the nursery and the clinic, but was forced to abandon the restoration of the crumbling house of culture. “Here nothing has been built since Soviet times. We’re just trying to save what is still possible,” he says, clenching his fist.

From his office overlooking the village intact encircling hills. There lies rich in humus black earth, which has long been the key to the prosperity of the kolkhoz: he exported grapes, wheat, and bow to the East, as little Moldova was the breadbasket of the USSR.

The consequences of the Russian embargo

The collective farm system collapsed along with communism, and former employees now own cultivated land, a large part of the harvest which they have on the table.

Ionescu Andrei (Andrei Ionascu) — one of the last four agronomists of Ignace. He appoints a meeting with us in the former collective farm barn, where, when uneven light bulb women with red eyes manually shelling tons of onions.

This tanned by the open air male one by one, have lost friends who decided to go to Europe because of the decline in the purchasing power of local consumers and the closure of the Russian market in 2013 in response to the signing of the free trade agreement between Chisinau and Brussels.

He envy speaks Romanian farmers who receive subsidies from the EU: about 170 Euro per hectare. The money he could upgrade equipment (part of it dates back to the Soviet era) and go to attack the European market, which is less susceptible to political vicissitudes than the Russian.

“Here is a beautiful land, — he says. — All our products are natural, without chemical fertilizers. But no one in Moldova no longer wants to engage in agriculture. My children will not accept I have the baton”. They most likely will leave Ignacia.

This human Exodus covers all regions of Moldova, from remote villages to cities, from the self-proclaimed Transnistrian Republic to the Autonomous Gagauzia, as the Romanian family and the Russian-speaking minority. One that aspires to leave the people usually have two or even three passports (Moldovan, Romanian and Russian) that allow them to settle in the West and in the East. According to different estimates, today in the European Union and Russia, employs almost a third of the 3.5 million Moldovans.

The aggravation of corruption

Moldova literally loses its vitality. “Abroad usually leave people aged 25 to 50 years, the most active part of the population, says the Chisinau political scientist Vlad Turcanu (Vlad Turcanu). Due to the fact that Pro-European governments failed to give impetus to the recovery of the country and to give a future to young professionals. Corruption, one of the main problems for young Moldovans, only worsened in recent years”.

Alexander Coser (Alexandru Cozer) is also no longer believes in it. In his 28 years he is a political activist and journalist with experience. Now he also collects suitcases behind her mother and brother, who have long settled abroad. “Chisinau — too grey, dull and sad town, he says at a table in Russian cafes in Chisinau. Wages and the standard of living here is extremely low. I want to save my life and future.”

At one time it seemed to him that he can change things. In 2009, he joined Prime Minister Vlad Filat when the Pro-European camp finally crossed two decades of Communist rule. Six years later leader of the Liberal democratic party of Moldova was detained for embezzlement of public funds at the end of one of the biggest scandals in the entire history of the young Republic. Despite the disappointment, Alexander Coser continued to defend the European idea in the framework of the platform “the Dignity and truth”, which brings together journalists, lawyers, researchers, students…

Whatever it was, the victory of Pro-Russian former Communist Igor Dodon in the presidential election in 2016 ruined the last illusions. He sees the decline of Pro-European ideas, the resistance of oligarchs, the effective propaganda of Moscow and the disappointment of the comrades who supported the candidacy of reformer Maia Sandu (Maia Sandu) for President. “For many of us it was the last hope to end a corrupt regime and cronyism,” he explains.

Another failure has devastated the ranks of the “Dignity and truth.” Every week all new members are said to have moved to Italy, London, Japan or Australia. “We love our country, but it is every day just more and more disappointing us,” says 20-year-old Christina Butuc (Christine Butuc) before leaving to study in Brussels.

Moldova, the poorest country in Europe, lives on income from agriculture and remittances from migrant workers (accounting for about a quarter of total GDP). A large part inherited from the Soviet Union industry is located in secessionist Transnistria. The income per inhabitant is 1 821 thousand dollar per year, or approximately $ 5 per day.

The Moldovan economy is recovering from the closure of the Russian market for its agricultural exports in 2014, as well as Bank scandal involving the disappearance of a billion dollars (12.5 percent of GDP), which resulted in the collapse of three major banks in 2015. Anyway, growth is small (2% according to forecasts for 2017) and inflation (6.5 per cent), whereas widespread corruption in the country pushes her investors.