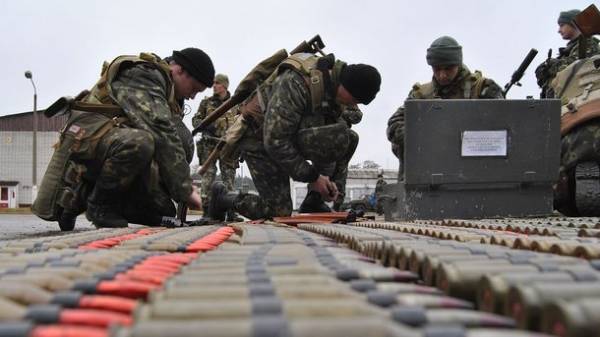 President Petro Poroshenko said that Ukraine will build a new plant for the production of ammunition. For this project it is proposed to allocate UAH 1.4 billion. Now ammunition in our country are not produced, since the Luhansk cartridge plant has been lost in 2014 as a result of military operations on Donbass. The Ukrainian army is fighting mostly due to old Soviet stocks that are already over. Therefore, a private ammunition production is very needed in our country, but experts say the challenges that will be faced during the implementation of this project.

ACCORDING TO NATO STANDARDS

That Ukraine will build a new plant for the production of munitions, President Petro Poroshenko said at the NSDC meeting last Monday. “I have a proposal on the construction of the munitions factory and the introduction of new technologies, in full compliance with NATO standards. This will ensure the compatibility of ammunition produced for the main calibers,” said the President. According to him, the ammunition will be produced exclusively from Ukrainian raw materials, and the construction of the plant will be invested, formed as a result of an overfulfillment of budget revenues. Thus, the total project budget will amount to UAH 1.4 billion.

After the Soviet collapse, the Ukrainian army received weapons of the Soviet model and under Soviet ammunition, which differ from NATO and the caliber and length of the liner.

However, now in the possession of the Ukrainian security forces began to appear the American sniper rifle Barret that use the powerful Western cartridge 12 gauge 7х99 (the first number represents the caliber and the second the length of the liner cartridge).

In addition, as already reported, “Today”, under the same ammunition “sharpened” and Ukrainian large-caliber rifle Rhino Hunter developed by experts of the Kharkov group XADO. And if we add to all this the desire of the Ukrainian side and by 2020 to meet the standards of the Alliance, the production of ammunition that meet the requirements of NATO, it would be very relevant.

Own munitions factory would be nice and peaceful country, and Ukraine that is at war, it is necessary as air. Lugansk cartridge factory, which is practically the only enterprise of the kind was lost in the summer of 2014 during military operations on Donbass. In June 2014 he was captured by militants of the so-called “LNR”, and in July there appeared information that the plant arrived Russian specialists ostensibly to establish the production of ammunition for the needs of the so-called “LNR”.

To avoid this, in late July 2014, Ukrainian air force struck at the LPZ. According to other sources, equipment LPZ were exported to Russia. However, recently, it was reported that the militants managed to establish, though to a limited extent, the production of munitions in the Lugansk cartridge plant.

Until now, Ukraine waged war on the old Soviet stocks, which are not limitless.

According to the Director of information and consulting company defense Express Serhiy Zgurets, if the fighting in Ukraine continued with the intensity of the summer of 2014, the Soviet ammo 5.45 mm would be exhausted by the beginning of 2016, and 7.62 mm at the end of 2016.

And talk about creating a new ammunition factory in Ukraine has been conducted for three years. In the autumn of 2014 the General Director of “Ukroboronprom” Roman Romanov said that “Ukroboronprom” plans “within two years to build a modern plant for the production of shells and cartridges”. The talks, according to Romanov, was then conducted with representatives of six foreign companies. A year after this statement by the then Prime Minister Arseniy Yatsenyuk reported the existence of several projects cartridge production cost from 20 to 200 million dollars. And in July 2016, Roman Romanov, said that the project documentation and estimates for the construction of a modern plant for the production of ammunition have long been ready and submitted to the Cabinet. “Ukroboronprom” has offered the government more than ten options for the construction of the plant. However, in October last year expired the two years during which “Ukroboronprom” promised to establish the production of munitions in our country, but things are there. 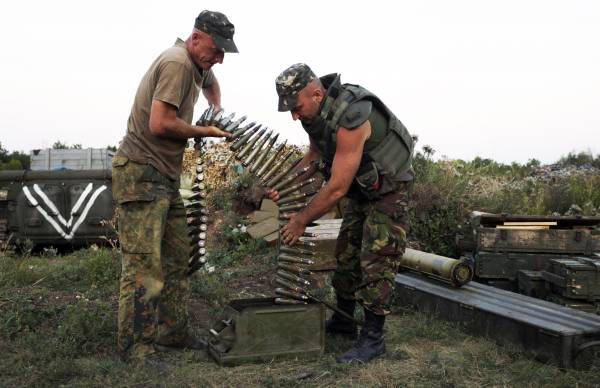 WHAT WE NEED THE AMMO

But even if the 1.4 billion needed for the construction of an ammunition factory, will be dedicated, all problems will not solve it. According to Serhiy Zgurets, 1.4 billion is a relatively small amount. “Kazakhstan is also building a plant for the production of ammunition. It costs twice as much than planned to be allocated for plant in Ukraine. The power plant in Kazakhstan will reach 30 million units of ammunition per year. This for a country that is not at war. And we know that we need to fight, then our need of ammunition must be more”, — said Zgurets, commenting on plans to build in Ukraine the corresponding production.

The second problem, according to Zgurets, is the availability of documentation on which to collect ammunition. “It should not be the old Soviet documentation, which are manufactured ammunition is incapable of penetrating the armor of the enemy. The final product should provide our soldiers the advantage,” said Zgurets.

At the same time, Colonel Yuri Povkh notes that the vast majority of losses and injuries in the Donbass occur from artillery fire. Therefore, according to him, to speak of the weakness of our ammunition prematurely.

“Yes, the Russians have created ammunition, with increased armor penetration, but they saturate their warehouses and not supply the rebels in the Donbass. Personal protective equipment available to militants — it is mostly 3rd class, designed for the cartridge 7,62×39 PS, that is the easiest and most common cartridge”, — said Yuri Povkh.

According to him, it would be nice if your own cartridge capacity could cover at least the needs of military operations. And then we can talk about production in Ukraine Western ammunition .300 Winchester Magnum (7.62 mm ammunition, which is widely used in the sniper weapons, NATO), .338 Lapua Magnum (8.6 mm sniper ammunition) and .308 Winchester (7.62 mm NATO rifle cartridge).