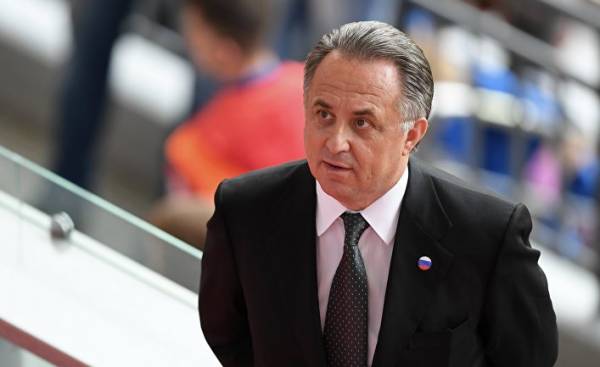 Of course, there were denials. They are always. It is an integral part of the rapid dance “Barynya”, when it comes to Russia and its doping violations. As soon as the Mail on Sunday reported that the entire Russian team of 23 people who participated in the 2014 world Cup, is in the spotlight FIFA investigating possible doping violations, the Deputy Prime Minister of Russia and Chairman of the organizing Committee of the 2018 world Cup Vatili (SIC — approx. TRANS.) Mutko visored and rushed into the fight. “Problems with doping in Russian football has never been and never will be, he said. Write some nonsense”. But it with the same disdain spoke about the allegations of doping in Russian athletics in 2013.

This is the same Mutko, about which the World anti-doping Agency said he would personally intervene in order to conceal the positive result of doping of the sample have foreign players, resulting in an analysis called negative, and the player could continue the game. This is the same Mutko, who was the Minister of sports of Russia, when the canadian law Professor Richard McLaren found that more than 1,000 elite Russian athletes from 30 sports participated in state sponsored doping program. It is strange that it did not affect his political career. In fact, it even increased.

Recent revelations have become a bomb with a very long fuse. In December of last year, McLaren told us that “the Russian team tarnished the Olympic games in London in 2012 on an unprecedented scale”, held in Moscow the world championship on track and field athletics of 2013 and the winter Olympic games in Sochi, too, was stained. He also said that doping was implicated more than 30 Russian players, but at the time it was unclear who it was. And now we see this whole picture in high definition. It would be strange to believe that football can’t be as dirty as rowing or, say, athletics. Or that Russia, which affected the results of the competition did not do so at the world Cup. As always, the challenge is to prove it.

But since Mutko and the company back on the horse, the chances of a confession of guilt very little. As noted by the Mail on Sunday, the main difficulty FIFA is that due to the powerful campaign of concealment is not at all mentioned in the report of McLaren athletes can prove that they have taken doping. Some of them may be innocent. Authorities without their knowledge to substitute clean urine sample, say, another clean sample.

That’s why FIFA needs to throw in the clarification of the circumstances of all its forces and means. Of course, to obtain evidence and to bring charges will be difficult. But the same can be said of other investigations in Russian sports. However, investigators dick pound and McLaren managed to find a way.

Given the fact that McLaren managed to dig up about the actions of the Russian authorities, accused of deceit, lies and misrepresentation in matters of doping from 2011 to 2015, surely there is enough evidence to take away from Russia the world Cup. But one look at the President of FIFA, Gianni Infantino, have fun laughing with Putin at the confederations Cup, is enough to understand: the chances are very, very small.

However, recent revelations put before FIFA very awkward questions. And of course, it’s time to tell us what to do, to deny the host country the right to host the world Cup. In the end, the attorney General of Switzerland Michael Lauber (Lauber Michael) is continuing the investigation into Russia and Qatar, studying 172 suspicious transactions conducted through Swiss banks during the filing and examination of application for holding the 2018 world Cup and 2022 world Cup. What if he will discover the shameless facts of corruption in both applications? Common sense dictates that something needs to be changed. Common sense FIFA says it will not change anything.

And yet Amnesty International has published a damning report about human rights in Qatar, in particular, about how he treats migrant workers building the stadiums for the world Cup. Noting that many of them live in horrible conditions that they do not pay salaries, and that they have confiscated the passports, Amnesty called the appeal “a blot on the conscience of world football”. In this hardly anyone will doubt, except for the idea that football has a conscience.

Perhaps it’s time to exercise more skepticism about the fact that in football there are no positive doping tests. In the past famous players took nandrolone, it was proved, among 36 former clients of Dr. Fuentes and the players were (as they say). But if we talk about the football stigmatized, they are detected infrequently and stored for long. But will for someone as a surprise if it turns out that some leading players are taking illegal drugs? Especially in such a fast and furious game of football?

This year the University of Gothenburg conducted a study and found that in the Premier League over the last 10 years increased by 50% intense running. “This creates new challenges in terms of fatigue resistance and the ability to quickly recover”, — noted in the results of the study. Of course, this is mainly caused by the increasing pressure from the players, which was not before. But still, the question remains: if athletes and cyclists resort to doping to stay in big sport and achieve success, why can’t the players to do?

Mail on Sunday carried a sobering analysis of the state of sport in Russia after the release of the report of the McLaren. It States that hundreds of elite athletes, suspected of involvement in the state program of deception, continue to compete on a global level, and “what are some sports authorities do not even put their checks, not to mention the indictment”. Perhaps Mutko not the only one who denies it.