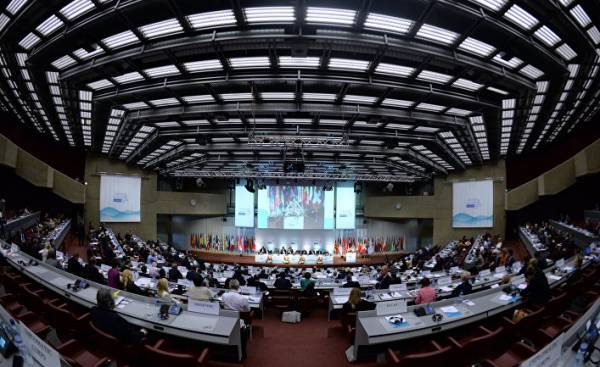 At the international forum of diplomats Ambassador of Lithuania rejected Russia’s claims about historical memory and stressed that the Lithuanian partisans after the Second world war lawfully resisted the terror of the Soviet occupiers.

At the meeting of the Organization for security and cooperation in Europe (OSCE) in Vienna, Moscow filed a claim in connection with the NATO created the film, which tells of the “forest brothers” in Baltic States who fought against the Soviet Union occupation.

According to the Lithuanian Ambassador Aurimas of Taurantas, the three Baltic States responded with a joint statement that “our countries have had the right to resist occupation and they did it because many people were deported to Siberia, tortured and killed”. As the diplomat said, after the joint statement was read out by the Ambassador of Estonia, the Russian diplomat went into an emotional attack, blaming the wrong version of history.

“I replied that we know about it not from textbooks, and almost every family had survived deportation to Siberia, or have loved ones who were tortured, killed themselves or fought in the woods. I said, and the brother of his grandmother, which is at tuskulėnai,” he told BNS on Friday the Lithuanian Ambassador. On the territory of the tuskulėnai (former princely estate is located in Vilnius, it is now memorial Park — approx. ed.) in 1944 — 1947, was buried killed by Soviet security officers. Active guerrilla war for the restoration of Lithuanian independence was conducted in the years 1944-1953.

During the reign of Soviet dictator Joseph Stalin in the postwar period killed more than 21 thousand people, their families and supporters. NATO recently created a short film, giving an idea about the partisan movement in the Baltic States. Russia has criticized and blamed the partisans for collaboration with the Nazis, the killings of civilians.

Lithuanian officials this criticism shoals, stressing that it tips at the beginning of world war II collaborated with Nazi Germany, and a guerrilla war began after the defeat of the Nazi regime. After the Soviet occupation of Lithuania during the Second world war in labor camps and exile were exported 275 thousand Lithuanians, according to the research Center of genocide and resistance of Lithuanian residents.