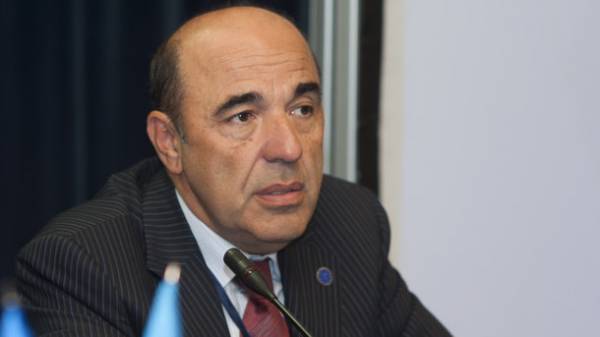 MP of Ukraine, Chairman of the parliamentary Subcommittee on human rights and the leader of the political party “For life” Vadim Rabinovich told the details of his trip to Russia, where he met with Ukrainian political prisoner Mykola Karpyuk, who for the third year serving time in a Russian prison, known as “Vladimir Central.” The details of the visit, the politician announced on the page on the social network Facebook.

“A little bit about yesterday’s (July 18. – Ed.) “detective” trip in “Vladimir Central” by Mykola Karpyuk. First flight – Ukraine-Belarus (direct flight connection with Moscow, we do not, however, on the train somehow can). Then the flight of the Belarus-Moscow. Already in Moscow, at Vnukovo airport, found that the entry to Russia, people’s Deputy of Ukraine V. Z. Rabinovich closed until 2020″, – said Vadym Rabinovich.

However, according to the politician, he managed to get into the country. “When I hit the “nepobedimyy” Russia, on the helicopter we flew in Vladimir. Later got up to 230-year-old “Vladimir Central”, where, in my opinion, over the last 230 years more outlandish character than Rabinovich, was not,” said the politician.

Vadim Rabinovich told about the meeting with Nicholas Karpuk. “It was attended by a representative from the prison (he sat quietly at the wall and did not interfere with conversation), and also conducted video recording (which I was very happy, because a copy of the video file, by agreement, is supposed to give me). It seems to me, to see the Ukrainian political prisoner Karpyuk people more interesting than to hear something from me,” said the leader of the party “For life”.

The MP added that “this is the first but important step towards the liberation of all of us.”

He also commented on the different comments of users of social networks about the political prisoner. “Say, guys, we do not have the “Bandera” and “Muscovites”, East or West. There is one major people of Ukraine, consisting of people who sometimes think differently, like in a big family. But to thrive we will begin only when we start with respect for everyone in the family. Therefore, I repeat, do not forget not to abandon his children is a state responsibility and the duty of its citizens. In this regard, freedom Mykola Karpyuk and all other Ukrainian political prisoners”, – said the leader of the party “For life”.

All the details of the trip to Russia and meetings with Ukrainian political prisoner Mykola Karpyuk Vadim Rabinovich has promised an exclusive to tell the TV channel NewsOne on Wednesday, 19 July, 20:00.

We recall that Mykola Karpyuk, one of the leaders and founders of the “Right sector”. In March 2014 he was detained at the entrance to Russia, where to this day is serving a sentence on trumped-up charges of crimes against Federal troops of the Russian Federation in 1994-1996, allegedly committed during the first Chechen war.

In may 2016 Karpyuk was sentenced to 22,5 years in prison. The Russian human rights organization “memorial” recognized Mykola Karpiuk political prisoners.